It's nothing but the same old, same old up here at the moment. No exciting sightings or exotic birds as yet but something will turn up or so they say.
Wednesday was another wet day with a bright spell in the middle. The best we could come up with initially was a drenched Buzzard on a telegraph pole. 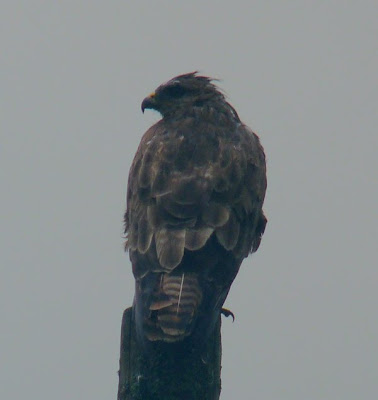 We managed to find two Otter that performed reasonably well while we picked off the regular waders on offer. While scouring the hillsides for something to move I got a very brief view of a male Hen Harrier that disappeared in the undulating landscape. With everyone on full alert it soon picked up again but again a brief view. We headed off to a different vantage point to see if we could pick it up again. The vigilance of the people on the tour was excellent and we soon picked the bird up again as it appeared as we drove down the road. Decent views of the bird were had as it crossed the loch. There was nothing else of note until we headed off for Mountain Hare and the selection of waders at Fidden. Another male Hen Harrier put in an appearance flying in front of us before giving prolonged views as it quartered the area. We watched it go down on prey and rise, victorious, before heading off. A soggy WT Eagle finished off the day as the heavens were in full spate again.
The overnight rain washed out one of the House Martin nests on the hotel next door. Two orphan birds were picked up as the parents didn't want anything to do with them after the nest fell. They have been taken into care and seem to be doing well. 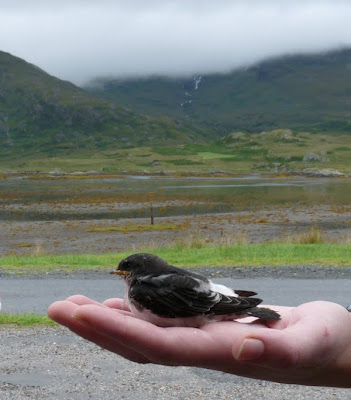 Thursday and Friday were booked off for the usual routine of catching up on 'stuff' so there is nothing to declare from those days! I'd checked the wader flock and scanned the ridges for Eagles with the usual success. The most interesting thing on the days off was the tale of someone trying to do a 3 point turn in a motorhome and managing to reverse over the edge of the road which left the front wheels high and dry - top quality! We've had some of the highest tides over the last few days so to see water in areas that you don't normally was a bit special - there's not much goes on around here - oooooh look, water and the boat that don't float!

The Swallows are gathering in preparation for their long migration so I tried to capture a few shots as they swooped around. The dull conditions were never going to help but I could have left this space blank. 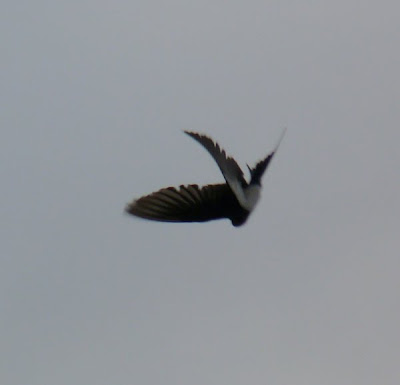 Saturday was a welcome day out in the field with reasonable weather conditions too. We bagged the 'stuffed' Buzzard sitting on the same pole but a bit drier today. 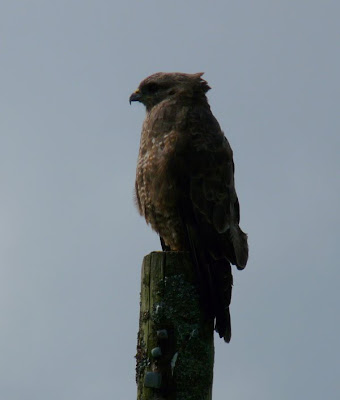 The young WT Eagle put on a good display of the new talent of flying. I've seen the bird doing short flights at low level but today it was up there doing it's thing and even crossed the loch twice. We picked up the mother and cub Otters before lunch and a Golden Eagle that was frustratingly against the land so it was hard to see. Another Golden Eagle put in a brief appearance before dropping out of the sky before we managed to get one sitting and another in flight at close quarters. A very obliging Northern Wheatear provided me with the opportunity to display my non-existent talents at digiscoping - voila 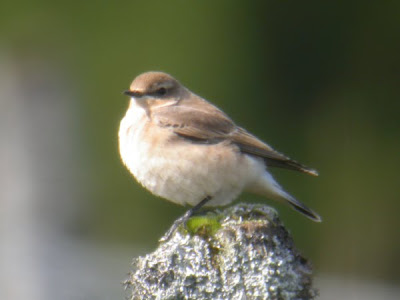 Sorry to hear about the house martins.... but very much hope that your are further along than mine were when the nest collapsed and that they survive.