Not a great deal of wildlife watching going on but the grandbairns', 4 and 5 year old, fascination with anything that moves is superb to experience. Sunday was a glorious day at the Uisken Games, a fun version of the Highland Games, where anyone can join in. The raft race is one of the highlights of the day and having your craft fall apart right at the start is not the flying start you want but you still race on. Here is a snap of two of the teams going for it! 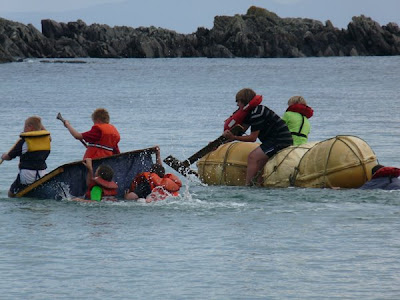 The kids busied themselves with prodding the jellyfish on the shore and one just had to be collected in a bucket to carry round. 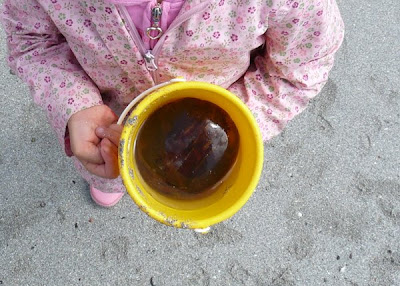 This Jellyfish is a nasty piece of work so it was fine in the bucket but when they wanted to get it out the bucket by hand it had to taken away. There were quite a few of these washed up on the beach and they, naturally, wanted them all! Next on the 'grubby finger' list were the Sandhoppers. While digging in the sand it was noticed, by the bairns, that these things were hopping all over the place. Lots of squealing as the Sandhoppers did their thing but straight in for capturing as they stopped. "Look, it's dead now." BOING, off it went again. Endless hours of fun - who had the most, the biggest, the smallest, the dead one, you name it, they had one or they'd find one! Back to base and the next find was this caterpillar of the Grey Dagger. 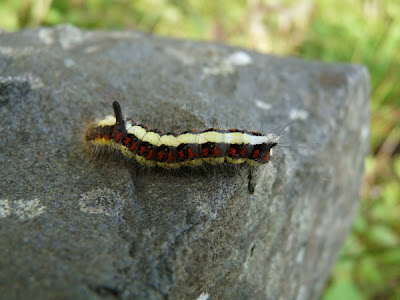 A nice one to look at but even better in the hand apparently - it was nearly pet of the week!
Sunday we took a trip to Balamory, Tobermory, or as someone called it Toblamory. We took the scenic route to take in a bit of the island. We stopped at the WT Eagle nest and were lucky enough to see both adults flying in, one with legs dangling and talons full. We found a Common Seal close to the road, basking on a rock.

Lunchtime produced the best from the kids as we sat devouring fish & chips. The gulls are always on the look out so it was no surprise to see them come closer. They wanted the gulls to stop sitting on the car roofs for some reason. When asked why the reply was 'The cars don't belong to the gulls' - magic! They decided they needed chasing off so they threw chips at them - it didn't work for some reason. 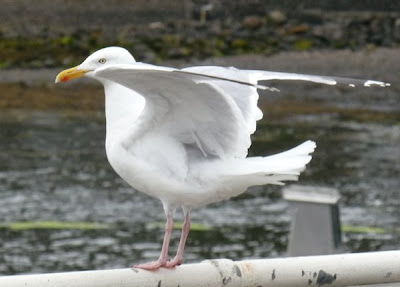 A trip to Oban yesterday was pretty uneventful apart from the Black Guillemots in the harbour. I took a few scenic snaps from the ferry for the holiday collection.
Dunollie Castle in Oban.... 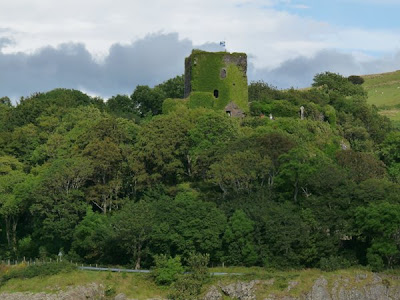 The ever present gull following the ferry, GBB Gull here... 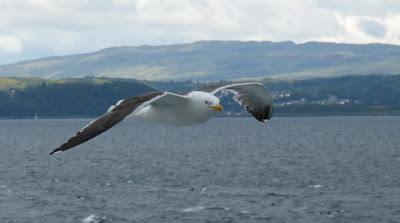 A squall heading for Mull.... 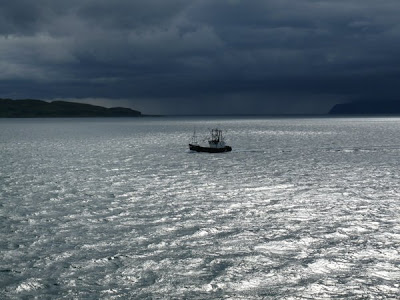 ...and the welcome sight of Duart Castle as we arrived back to Mull. 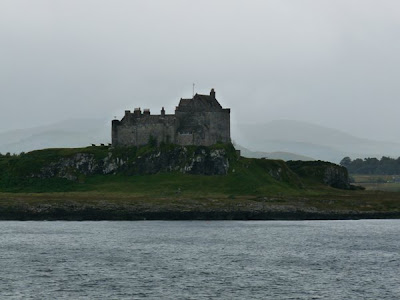 Just magical - you certainly know how to tell a nice story... such great fun with the children.
Meanwhile - we all have swineflu - or at least the symptoms of swineflu to be absolutely accurate so just as well not on Mull! Have a good weekend.