Sunday started off quite poor with very little on offer and we struggled to kick start the day. No sign of any WT Eagle in the parts of the forest we could see through the rain but we did get some Red Deer. We managed to find an Otter in the choppy water and it was a bit of a relief to see it was the dog Otter that had the open wound on it's head. He's been missing (at least I haven't seen him) for about 2 weeks so there was potential for him to have succumbed. Good to see him out there fishing well! I managed to take one photo, not a good one either, through the day so here it is - a Curlew. 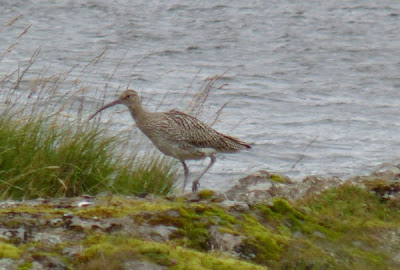 We did get a couple of Adders but the clouds were hanging on to the tops so no sign of any raptors. We decided to go to a different location to try for Golden Eagle if the tops were clear. We viewed the area from a distance and the ridge was under a big shower of rain. Another diversion to give the shower time to pass and off we went for the Aquila. A large raptor was seen to disappear against the hillside and not reappear so kept scanning until eventually the shout went up for Golden Eagle. There were a few people about a mile behind us on a hilltop and we could hear them shouting 'EAGLE!' from where we were. It's amazing how well the sound travels. Elated, we pushed on to see if we could bag anything else before the end of the day. The sun was now shining and the wind had dropped so we headed off for Mountain Hare. No problem with that one and got a superb bonus as a Peregrine came swooping in on a flock of Oystercatchers in the field. Naturally they scattered but the six Ravens feeding on a sheep carcase didn't budge. It was getting late in the day so we headed back to see if we could get WT Eagle. After a rapid return we got slowed down by finding another Otter just in time for it to get a big catch and we viewed it on the shore while it feasted. Our luck had certainly changed for the day. The juv WT Eagle was on display when we got back to the nest site so it was a bit of a hard day but persistence had paid off!
Monday was a different day all together, the sun was shining, hardly any wind, it was looking good. We started off with a herd of Red Deer and some cracking views of the islands offshore.

A closer image of Staffa, in the foreground, Dutchman's Cap, to the right, and Tiree on the horizon.

I had a scan over the sea and picked out a Basking Shark but as we watched the numbers grew until we had 4 sharks all feeding in the same area - fantastic. Back down the road we went and a request for a comfort break came just in time to see these two Red Deer at close quarters.

Onwards again and another chance stop gave us great views of a juv WT Eagle flying overhead - a bit slow with the camera though! 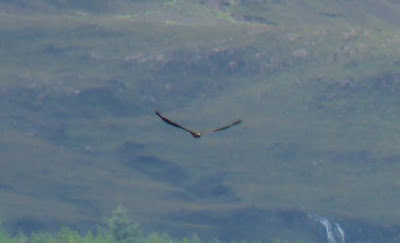 Great views of roosting Greenshank and Golden Plover were had on the way to lunch where we bagged a female Hen Harrier, 2 Golden Eagle and 2 Adders. 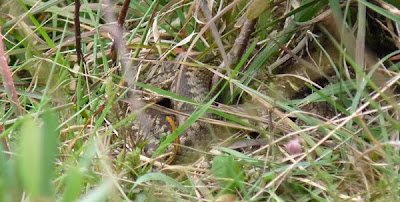 We headed for the beach to let the kids have some time to burn off some energy. On the way down we had a cracking male Merlin fly in front of the motor and also bagged another Golden Eagle, Black Guillemot and a stunning Grey Wagtail.
Tuesday is bleak. It's still raining now and I'm still wet! I had a request for Hares, Otters and WT Eagle - nothing difficult to find then. We headed off for Mountain Hare and bagged three of them as soon as we stepped outside - cool! Common Buzzard, Raven, Stonechat, Dunlin, Ringed Plover, Northern Wheatear - the list just grew and grew and then rain started in earnest. Next goodie in the bag was an Otter. We watched it for quite a while hoping it would come ashore but he was happily munching away on everything he caught. It was a good feed too as he must have came up with a fish just about every time! While having lunch we picked up a grand selection of waders including the regular Golden Plover and a cracking sumplum Turnstone. Another two Otters cuddling up on the seaweed got the afternoon off to a good start and then an adult WT Eagle sitting out the rain in a conifer completed the task for the day. Red Deer were seen in good numbers but the stag at close quarters on the way back was the star of the show. 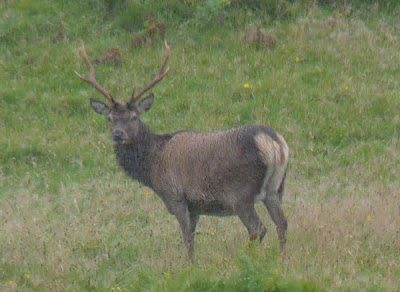