Wednesday started off nice and deteriorated as the day went on. The WT Eagles decided to put on a show with the female perched in a tree showing well. 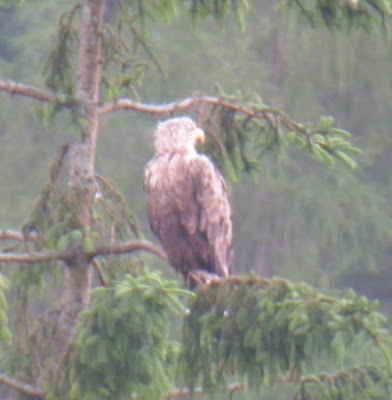 The male bird flew in to the nest for a bit of a chat to the youngster. Just like any teenager it wasn't taking any notice of what dad had to say. As you can see the juvenile delinquent has lost it's head. 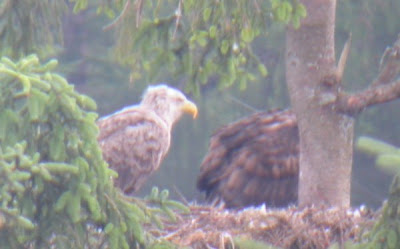 Next stop was a search for the Otters. It took a sharp eye to pick out the furry outline of mother and cub poking above the rock and not everyone was convinced. We drove to a better position and walked a bit closer to get some stunning views. The tide was still rising and we waited for it to push them off. Ten minutes later they were on the move - a bit of a scratch and a yawn before they swam over to another rock and duly settled down to sleep again. 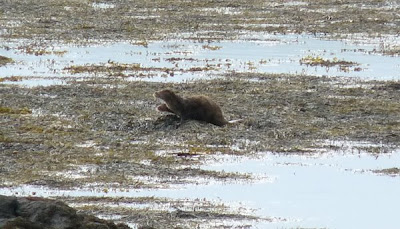 The weather was pushing in from the South and a few spots of rain were starting to fall. We moved round to the other side of the loch to look for some waders. Dunlin, Ringed Plover, Redshank and Curlew were the best of the bunch and a nice Buzzard flying around causing a bit of alarm. 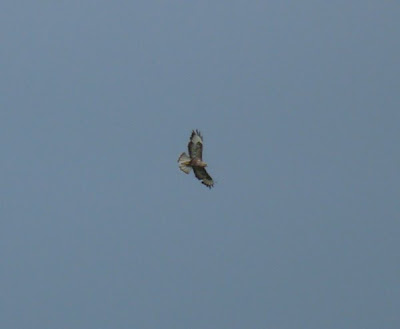 The Common Seal colony is very busy at the moment with the adults teaching the youngsters the ins and out of the big bad world. A female Goosander was a good find asleep on the reef next to the Common Terns. We dipped out on Golden Eagle as the tops were covered with cloud and the rain started in earnest but not before we'd seen an Adder, a few Red Deer and a cracking Common Lizard. 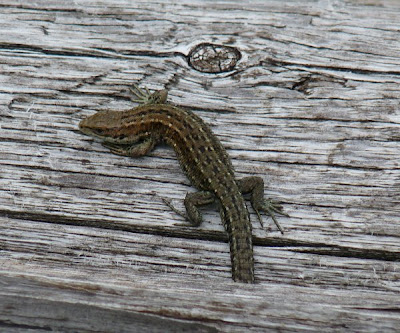 We'd had a tip off about a Quail that was singing it's 'wet-my-lips' song. We thought it was worth a look knowing full well we would only hear it at best. The welcoming party of Linnet and Twite in the car park was worth the trip alone. I did manage a half decent snap of the Twite despite the rain. 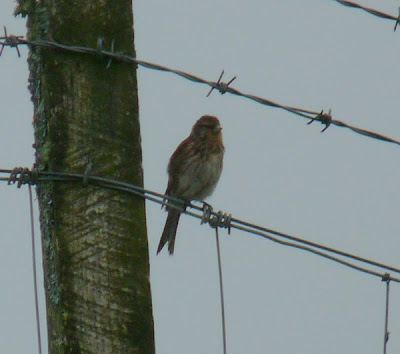 A bit of a wander down the track was giving no indication of Quail but two Cuckoos sitting on the fence was a good find with the male bird waving his tail around trying to entice the female. Just as we returned to the car park, boots crunching on the gravel, I caught a faint 'wet-my-lips'!! SHUSH!!...and there it was again 'wet-my-lips', 'wet-my-lips'. There was no chance of seeing the bird but it was great to hear it. We travelled on with the weather improving but the cloud cover was going to stay. Some cracking views of Mountain Hare running across the moor and a brief view of a Hen Harrier finished the day of quite nicely. As I was dropping people off I picked up the male WT Eagle perched in a tree showing very well but he was soon flying off over the loch with Ravens giving chase. He turned around to give another fly past with a Raven in full attack mode. 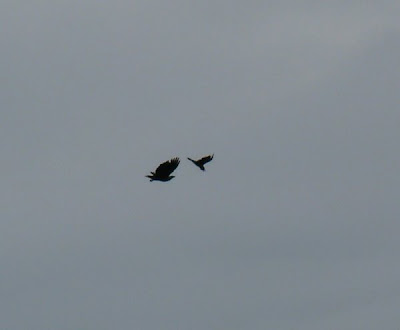 You just don't know what's around the corner!
Posted by Bryan Rains at 12:33

I love your blogs they are so descriptive it feels like we are there with you. Certainly showcases the wonderful amount of wildlife you have on Mull!

It's always good to know that people are enjoying the blog. It's a fantastic place to be and it's good to share. Thanks for reading.

You know me - I always enjoy the blog too.. glad to see the cuckoos and hen harriers are now making regular appearances! Coming back up in Novmeber so not as long as a year to wait this time round!

Kate - that'll be the last of the Cuckoo sightings. You'll have to let me know when in November!