Well, that's another month out of the way and what a hot one it was. There was a sprinkling of rain that started just about midnight last night but the heat is still winning the battle!
Saturday was scorchio - not great for wildlife or humans that don't like the heat. WT Eagle is a dead cert so we happily watched an adult with the youngster while melting in the heat. The hotter days can make the Otters hide away so we were delighted to come across a mother and cub that looks to be about 5-6 month old. We were in an elevated position looking down on them for a good half an hour before we left them to get on with it. A Golden Eagle did try to distract us but the Otters were closer! Stunning views of a couple of male Whinchat and a Stonechat were a highlight as were three Common Crossbill that, for once, decided to land in a tree a bit lower down. Naturally the camera was in the vehicle which was too close to the Crossbills for me to get the camera without disturbing them. The photograph below is one I took a few years ago but they are cracking birds. 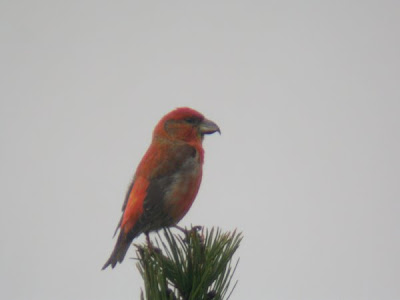 Sunday was another hot one and my head has started to peel! We made a determined effort to bag Otter early in the day as it was going to be too hot in the afternoon. A lone dog Otter asleep was the best we could do but it's better than no Otter at all. It's amazing how quiet the afternoons can be in the heat but the biggest surprise at the moment is how few Buzzards are around. Some of them should have fledged young by now but the numbers seem low. They'll be back soon though and people will say they've never seen so many Buzzards! Speaking of juvenile birds Whinchat and Stonechat both have youngsters on the wing and probably well into the next clutch of eggs too. Golden Eagle was a big miss today despite plenty of looking and a couple of scares that both turned out to be WT Eagle. The Adders have decided that it's time to show themselves on a regular basis now which is kind of them! Pale Butterwort has just started to flower so a close up of the flower was difficult to pass up. Very different from the blue flower of the regular Butterwort. 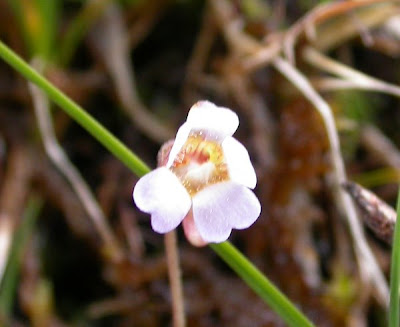 Monday was another belter with a bit of a breeze. We started off with an absolutely cracking female Hen Harrier that even managed to find a couple of Mountain Hares to look at! After bagging a Greenshank we headed off to see the 'chats, bagging a Swift along the way and then to lunch. Adder was easy and Crossbills flying backwards and forwards calling but not giving great views kept us amused while we waited for a Golden Eagle to perform or not. The photo says it all...... 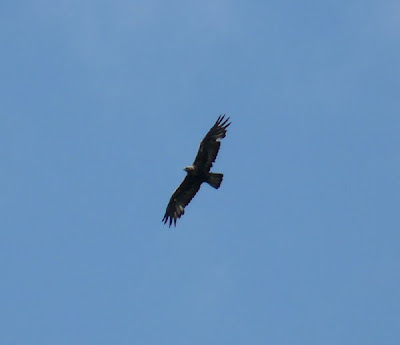 Another Golden Eagle patrolled the ridge as we watched the WT Eagle and the Crossbills gave another fly over performance here too. The heat was oppressive, 25C, and it was keeping the Otter in the shade. Nobody got Otters through the day and you can't blame them for hiding from the heat! A Mute Swan on Loch Beg was no consolation but a new bird for my doorstep list!
Tuesday was hot and sweaty again but another cracking day in the field. We started off with a distant dog Otter that was disturbed by a couple of people in a kayak. The WT Eagle chick showed well but no sign of the adults today. Back to Loch Beg and we scored with the mother and two cubs. The mother was fast asleep with the youngsters tumbling all over the top of her - superb stuff. Seven Golden Plover were on the loch early in the morning but we couldn't relocate them as we came back round. While watching the Whinchats two Golden Eagle cleared the ridge and as they disappeared we picked up a female Hen Harrier that disappeared almost immediately. Most of the Cuckoos have left the island now but there are always one or two that linger so it was a nice surprise to find one sitting on the wires. This was surpassed a bit later on as we picked up a male Hen Harrier that gave a tremendous performance. We saw at least four Mountain Hares that showed really well but none as good as this one giving profile views against the sky. 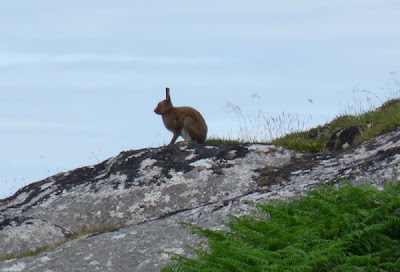 We went out for a meal last night and on the way back home at 23:30 we disturbed a Woodcock sitting in the middle of the road and also found a Tawny Owl sitting on the wires. The Owl was kind enough to wait while I got the scope out, attach the camera and take a photo with an 8 second exposure - not bad for looking at a blank screen on the camera, I think!! 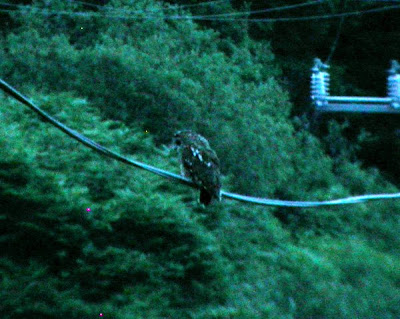