Wednesday was another good weather day apart from a bit of a splash early on. It was one of those days that start slow so it has no choice but to improve. We picked away at the small birds early on and then got caught in a heavy shower while away from the motor. As usual I was just in a T-shirt - I should know better but I don't and I'll never learn as you'll find out! After the rain we drove into sunshine and midges but the Otter we found was a good distraction from the biting monsters for a while. Next on the hit list were 5 RT Diver and 3 Black Guillemot with a few Common Seals swimming around too. We found a nice female RB Merg hauled out on the shore and scoped a WT Eagle from about a mile and a half. Lunchtime saw us scanning the ridges while munching but the eagles were polite enough not to show until we'd finished. Two Golden Eagle put on a decent display and then a WT Eagle showed off the skill of gaining height in seconds - very impressive! The Golden Plover flock seems to be holding steady at about 30 birds with the Dunlin difficult to find at times. Now for the pirates! Wednesday evening we were booked on to the RNLI fundraising trip round Iona on the MV Iolaire. The trip is run every year at short notice on a calm evening. First port of call is Tinkers Hole, a safe haven for the visiting yachts, where we sail round the yachts collecting donations while serenading them with Scottish songs. Here we are approaching the first 'victim' of the evening - you can see one of the eager pirates rubbing his hands in anticipation! 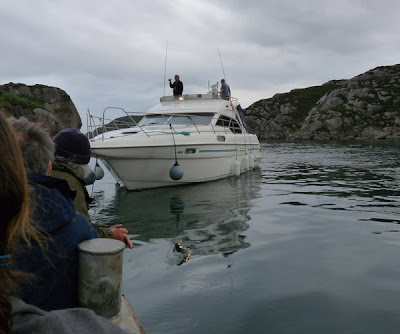 A successful raid on the first boat - seriously though, people give generously to this worthwhile cause and enjoy the visit they get from this fundraiser. The captain of the boat has to skillfully manoeuvre the boat so that the collection bucket can be put within reach of the yachtsmen. We get a request to sing the Wild Rover from these people - classic stuff! 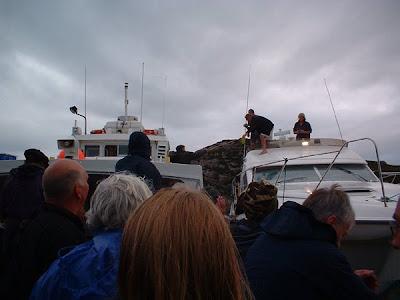 We also had a guided tour of the interesting points like the Fairy Staircase in Tinkers Hole...... 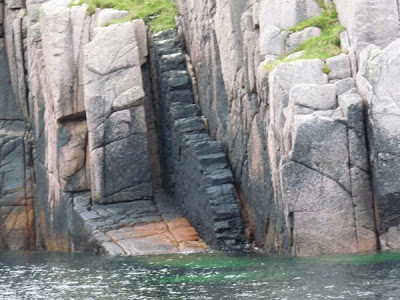 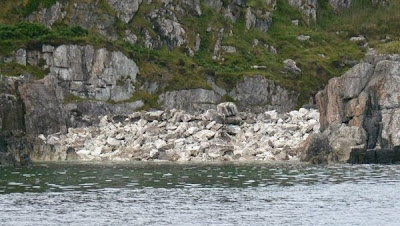 ......and despite the showers of rain we were spotting wildlife too. Davy, the skipper, announced that he could see what looked like a Basking Shark up ahead so we went for a closer look. This must have been at least 20 foot long - you can see the tip of the nose and the tail as this one surfaced.

It came in for a closer look too - shame about the weather though. You could see all of the Shark when it rose to the surface. One of the highlights of the trip. 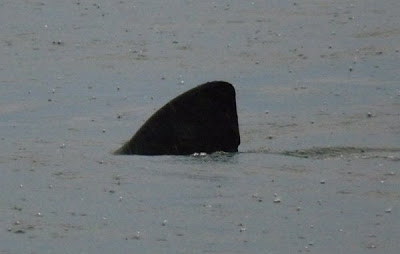 We carried on round the West side of the Iona. You can see the shower that had just washed over us in the next shot with Ben More in the distance.

We visited a few more people in Bull Hole before setting adrift in the Sound of Iona to hold a raffle and an auction. We raised almost £800 on the night for the RNLI.