Thursday, Friday and Saturday was a continuation of the pleasant weather with the usual bag full of goodies - Otters, Eagles, Deer etc. This deer had everyone convinced he was stuffed as he just stood and stared but didn't really move until we did! 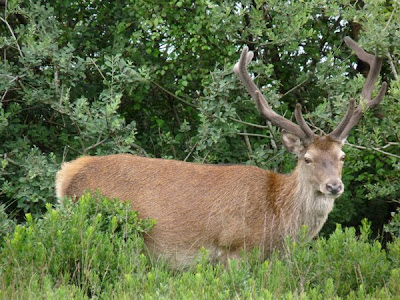 Sunday was a day of rest with some hefty showers forecast - we weren't disappointed. A good change in the weather always brings a few birds in and makes life interesting. A clear spell between the showers had me checking the shore to see what was out there. The Golden Plover were there but only 20 of them and I could see some smaller waders too. There were 2 Turnstones, 23 Dunlin, 1 Sanderling and a Greenshank flew in too. Not a bad haul. A quick check of the ridges before the next shower came through produced 1 Golden Eagle getting harassed off two Common Buzzard before disappearing into the cloud. I also had a run out in the dark, in a clear spell, but it wasn't too exciting. A single Barn Owl closely followed by a Short-eared Owl that nearly killed itself on the front of the motor - just the wingtips clipped the bonnet as I buried the brake pedal - one lucky Owl! On the return journey the rain was falling hard so no Owls on the way back but plenty of Frogs and a single Hedgehog. The weather at the moment is low cloud and heavy rain - should be a cracking day then!
Here's one I need some help with from you Lepiwhatsits - it'll be a common one but I haven't got a good enough book to pin it down! Thanks in advance. Is it a Hebrew Character?

Or how about a Large Yellow Underwing?? Difficult to tell really....!

Yes I liked the beetle ID and I will be on the hunt for it in November...
I had a good weekend last weekend looking at short toed eagles and goldies very close up down in the south of France....still not as nice as Mull though...

Its a Lesser Yellow Underwing of the Hebridean form...