When the sun went down last night the wind dropped too. The clouds disappeared, the moon was out and the stars were twinkling - stunning. We were just settling in bed when a Tawny Owl landed on the gate and gave a hoot so that was me straight to the window - you guessed, I'm sure, it wasn't there. The male and female were calling to each other so I just peered out the window and eventually one flew by - phew. I was hoping the clear conditions would continue till the morning but it wasn't to be. It was certainly icy as you can see from the picture below and you could see the top of Ben More for about half an hour then the cloud base began to sink. It was snow coming in. It's not snowing hard but it's still coming down now so the visibility is poor and it's not great for photos but I've had a go!

View from the door 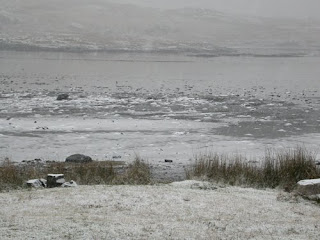 Turnstones marching in the ice and snow - honest they are there! 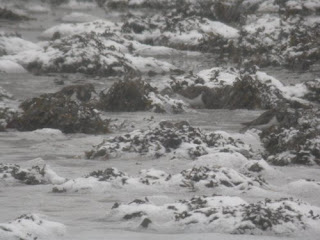 'What do you think of the weather, Bob?'

'I dunno, Bert, but I'm not getting my camera out!' 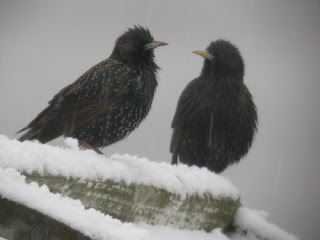 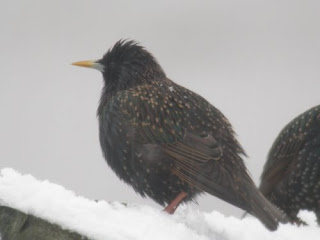 Does this qualify for a murmuration of Starlings? They certainly had plenty to say. We have a flock of about 20-30 birds round here and you never see them in the gardens as they do all their foraging on the shore or in the fields. I wonder if they'll ever take handouts? Cracking birds though and great mimics, the sound of a distant Buzzard is usually one of these guys pulling your leg:-) 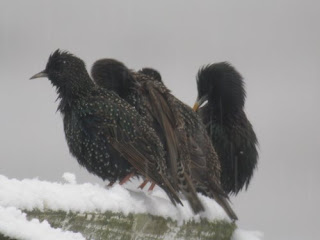 I managed to get 3 shots of this Blue Tit and this is the best of them. I think it gives a good impression of how cold it is though. Brrrrrrrrrrrrr!! 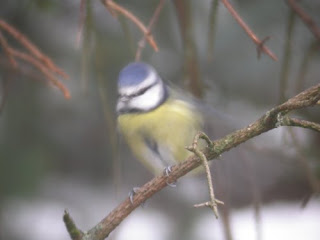