I had a few things to do this morning but I still managed to squeeze in a shot of this Buzzard. He's a regular feature on the telegraph poles here and I can't resist having a go. As soon as I walked away from the camera he came and sat on a closer pole. No worries with that though because he would have been too close then! 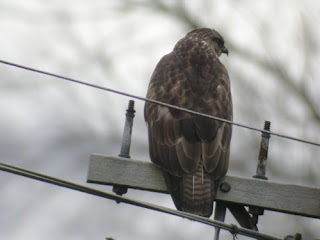 A check round the loch with the scope didn't reveal anything exciting but I did see the Goosander flying in. I'm guessing he spends the night on one of the hill lochans. So the usual suspects were out there - Turnstone, Ringed Plover, Redshank, Greenshank and the drake Goldeneye. A White-tailed Eagle over the far ridge spiced things up a bit. It appeared to have something sticking up from it's back but it was difficult to make out over distance. It could have been one of the Loch Frisa satellite tagged birds though.
The weather didn't seem too sure what it wanted to do and that had me hanging around waiting for the right moment. While I was waiting for that moment the Starlings were doing their thing. This is the chap that does the Buzzard impersonations. He was doing his best to impress his lady friend until another Starling tried to muscle in but he was having none of that. He berated the impostor and shuffled down the wire until the other bird flew off - well done mate! 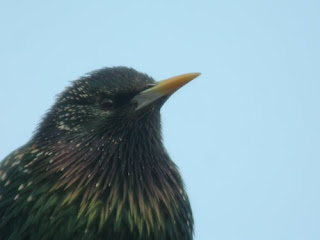 I'd waited long enough and that nice clear spell of weather just wasn't going to happen so off I went. Loch Scridain was reasonably calm and also reasonably blank with 8 GN Diver, 2 Little Grebe, 20 Shag and about the same number for RB Merg. A juv Golden Eagle sporting lots of white in the wing and what looked like an almost completely white tail was patrolling the far ridge. I took some shots but they are for my eyes only or the bin probably!
A bit further up the loch this Cormorant had his best outfit on and he was soon joined by 3 Shag. It's a nice comparison between the two different types of bird - the Cormorant being the large bird on the left hand side. 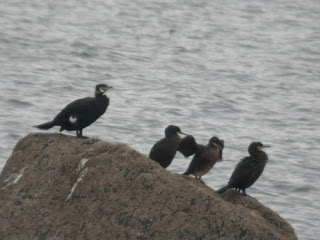 It was still pretty cold standing around with the wind coming off the loch so I thought a bit of a wander in the shelter of some woodland might be good. Woodcock, GS Woodpecker and some of the smaller birds would have been nice but I saw and heard nothing but a single Great Tit. At least it wasn't completely wasted.
I was looking for this Kestrel as I drove down the road but I still didn't see it till it was too late (better on the road than in the ditch) and I had to drive past it. It was obviously time for afternoon tea as a delicious looking mouse/vole was being devoured. I waited for the meal to end then we went our separate ways. 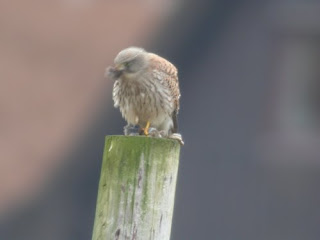 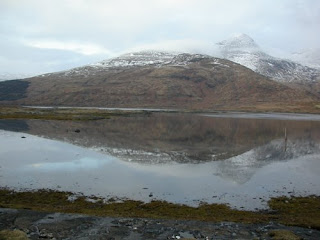 Hi Big Yin, great blog. Will be keeping an eye on this as we're visiting Mull in April.

Thanks Kay - hope you enjoy your trip to Mull.