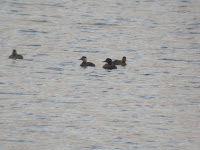 I set off today with the intention of counting the Greenland White-fronted Geese down the Ross of Mull.
First port of call was to see if the Common Scoters were still around. Sod's Law, all four birds together when it doesn't really matter. It was nice to watch them feeding and manipulating the mussels and swallowing them whole. How do they break them down to get the meat out of them? 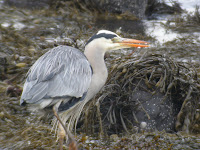 While watching the Scoters this Heron was feeding in the shallows and I was full of intentions of getting a shot. He flew off while I was setting the scope up 'another chance missed', I thought. An almighty 'squawk' announced his arrival back to the breakfast table. Obviously something tasty on the menu down there. A stunning adult bird - I took a few shots and left him in peace. 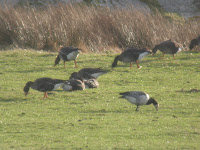 Off to Fidden for the Geese.......
These Greenland White-fronted Geese are pretty faithful to their winter sites. No sign on bird race day but today there they were. 32 birds in total which is down on last years high of 46. Also present were 4 Barnacle Goose, 2 Canada Goose and 30 Greylag Goose. These birds are notoriously difficult to get close to so I'm happy with distant shots. I did try further round the field but it was head shots only. 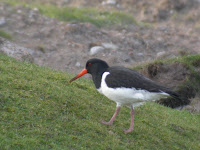 Also in the field with the geese were a few plovers. The Lapwings were well spaced out but I counted 28 (A huge flock compared to the 4 birds I have at home). The numbers will build though. I saw one Meadow Pipit and 2 Rock Pipit as I was driving to my next stop at the farm. I was met by 10 Oystercatchers feeding on the short grass and very close but someone else was there to greet me too. One of the working dogs came to say hello and proceeded to 'herd' the Oystercatchers away from me which, I'm sure, I didn't tell him to do- what a good dog eh?! 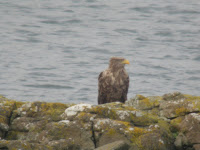 Time was cracking on so I started to head for home. I was flagged down by the farmer who told me there was a Glaucous Gull hanging around. Had I seen it? Nope. It'll be good info though.
I checked another location known for WF Goose and drew a blank. Plenty of Buzzards and Kestrels along the way and a stunning raven in full tumbling mode.
I checked Loch Scridain from various points and picked up 1 Guillemot, 1 Black Guillemot, 3 GN Diver, plenty of Shag, 1 Cormorant and no Eider (wonder where they are). About half a mile down the Loch I could see these 3 WT Eagles sitting on the rocks. Got to have a closer look don't you? The Adult bird is a male and the 2 first winter birds look like females. 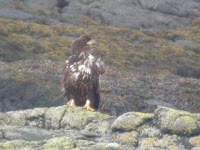 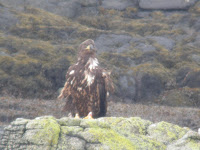 Fab to see a white tailed eagle on a blog.

Happy to oblige. It's a bit like 'Catchphrase'..say what you see.