and then there were none... 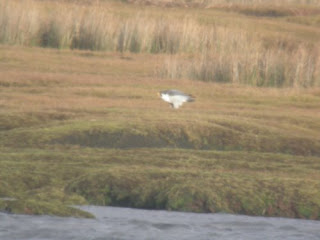 This morning was a bit of a wash out so I was glad to be otherwise occupied in the shop. First customer this morning had a tale of being stuck by lightning. Leaning against a lightswitch in the shed while waiting for a hail storm to pass then next thing he knows he's lying on the ground - cor blimey!!
Anyway, I digress, the weather cleared and it was time for a scan about the Loch. First bird of note was a drake Goosander which has been present off and on all month. Next on the list was a drake Goldeneye then this Peregrine. No apologies for the quality as this was even further away than yesterdays Otter. The bird was feeding on what looked like a bag of Ready Salted crisps (I'd just finished mine). It's crop was bulging so it was a hearty meal and I'm hoping it wasn't a Greenshank as I could only find one of those. After the meal was finished the Peregrine proceeded to waddle around on the grass and wipe it's face!! A nice male Hen Harrier floated into the view as I was watching the antics so I followed that while the clean up was going on. The Harrier dropped into the grass and didn't reappear so I went back to the Peregrine and that was gone too. A quick scan before the next shower hit produced another drake Goosander, 10 Teal and 12 Oystercatchers.
Posted by Bryan Rains at 15:17

Walkers or Seabrook crisps or did you not get an ID so left it as crisps (sp).
A fellow shopkeeper and birder. Hope your business is better than mine this January.

Hi Alan
Mr Lineker would worry if I advertised his crisps.
Very quiet up here in the winter.
We'll call in sometime if we ever get the chance but I said that when we moved!