The Mull Bird Club had a run out today despite the prospect of gale force winds and lashings of rain. I checked the local forecast and it looked pretty good to me (moderate wind with some showers) until about 3ish. I set off early to check a few spots on the way to our starting point at Loch na Keal.
There's not a great deal you can check while driving along the single track roads but you always keep your eyes open so first on the list this morning was the regular ringtail Hen Harrier quartering the marsh out the front. Next stop on the mad dash was a regular WT Eagle spot and sure enough there was an adult male bird sitting proud in a tree. Carrying on with the selfish birding I headed for Loch na Keal and a search for a bird I missed on the Bird Race. A quick scan produced about 30 Wigeon, 10 RB Merg, 1 GN Diver and the target bird...1 Slavonian Grebe - woohoo!
I was first to arrive on scene at the meeting place and the weather was starting to deteriorate already. Best get some things pinned down so we could move on quickly. Gulls were easy sitting on a spit of land - Common, Black-headed, Herring and Great Black-backed with Oystercatchers and Curlew in the fields. A friendly Robin was wondering if I had any food - too early for lunch mate. I moved position to get a better view along the shoreline and there was 2 WT Eagle sitting on the spit. The rest of the Bird Club were just starting to arrive so things were quickly pointed out along with a shout of 2 large birds approaching. Another 2 White-tails - not a bad start. 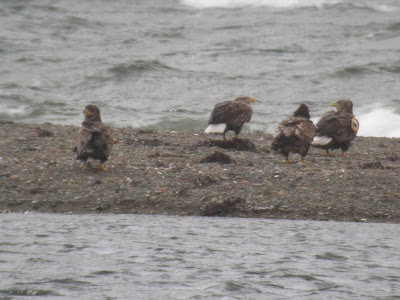 With a nasty looking hail shower travelling towards us we headed off back to where I had the Slav. We dodged that shower and stopped to look through a flock of Greylags (nothing extra there) but picked up Blackbird, Song Thrush and Dunnock. Back on the lochside we had a flock of Teal close in, Golden Eagle over the ridge behind us, Mallards and Goldeneye distant and Slavonian Grebe up and down. It's never good looking for them on choppy water - we got 5 in total and also 1 Black Guillemot. En route to lunch we saw plenty of Shag, RB Merg, the odd Slav, GN Diver, Black Guillemot and a single Goosander. Star prize for the day goes to Barnacle Goose. They are usually on Inch Kenneth but today they were on the beach on our side. There was approx 80 birds. 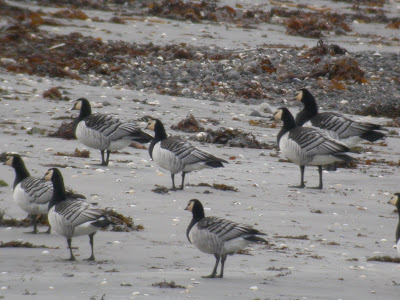 We headed onto Loch Beg, my local patch, and immediately picked up a Hen Harrier, Stonechat, Lapwing, Little Grebe and a distant Otter. The sky was now grey and threatening rain - not much time left! Greenshank, Redshank and close views of a Kestrel and another hunting Hen Harrier were in the bag before the rain started. Cracking views of Shag, RB Merg and GN Diver were the finishing touches to the day and we dipped the BT Diver and Common Scoter - can't get 'em all. I had 40 birds on my list but there were extra birds (Sparrowhawk, Fieldfare, Goldfinch etc) that I didn't see. Another great day out!

Presumably the Greenshank has been wintering?

The Greenshank are here most of the year in varying numbers. They don't breed as far as we know!