Not a great deal happening up here at the moment. I think everyone will be gagging for the spring migrants to come flooding in after the start of the local birds singing and the return of the Skylarks and Wagtails. A patch tick was found on Wednesday in the shape of 2 Mute Swan and they are still here today - it saves an 18 mile drive to see one. There is a Coot on the island at the moment but I can't bring myself to drive 50 miles for that!

Both types of Eagles have been displaying and mating in the brief clear spells that we have had and next month (March) will see them all settle down to nesting.
Two of the Common Scoters have decided to put in another appearance after a long absence. I tried for a photo of these birds but they flew off just as I got them into focus. I'll keep trying for them as it's the drake bird and one of the females.
Today looked a bit brighter so I thought I would have a look around to see how things are changing if at all! Naked eye birding at 30mph isn't easy but you always see a few things so 6 Shag, 3 GN Diver and 5 Buzzard was a decent tally on the way down to Fidden.
The Lapwing are gathering well at the moment with 200+ scattered around the fields and moor but only 8 Golden Plover today. Skylark were singing everywhere and they even allowed a half decent photo. 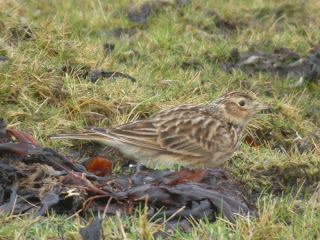 A quick stop at Bunessan to look for the dodgy Eider that wasn't there again but a nice female RB Merg was fishing in the shallows. I got about 10 photos of the bird snorkeling before getting this shot! 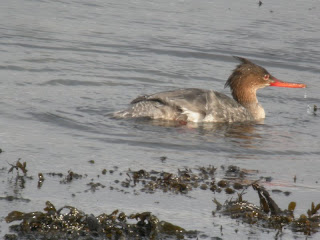 The weather didn't know what it wanted to do so it was intermittent rain usually starting just as I get out into the fresh air. A view across to Burgh produced a single Golden Eagle displaying and you just know there has to be a second bird if you wait long enough. The displaying bird disappeared behind the cliffs than reappeared with another bird in tow...was it the female? Nope, it was a young bird with white in the wings and tail and he was displaying too - interesting. The two birds were roller coasting like mad but eventually they eased off, touched talons and drifted left which brought another 2 Golden Eagle into view!! All 4 birds were circling round and occasionally there would be a touching of the talons and all too soon they all dropped behind the cliff again. I waited for about 5 minutes before the adult male came back up to do some spectacular dives on his own. I guess that put everyone in their place as there was no more action after that. The rest of the afternoon was spent indoors helping someone out but it was good option looking at the weather. On the last leg of the journey home was the incident with the Scoters so I opted for the scenic view down Loch Scridian instead. 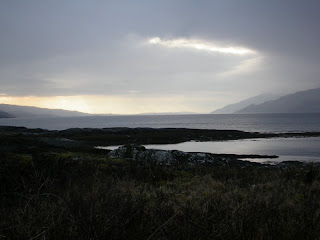