....when you don't have to try too hard!
My early morning browse outside was kept to the bare minimum and didn't involve any birds, apart from the Robins, due to the nithering Northerly and blizzard conditions. The Robins were trying their best at the peanut feeder this morning so we had to get them some food before doing anything else. The only problem with putting food on the ground is our cat likes it too (peanuts, bird seed, bread - he'll try them all) so he chases the birds off it - nutter!! He's a proper mouser and doesn't have a clue how to catch birds so we don't worry too much.
A couple of hours into the day and it clears nicely but the wind is still cutting. I need to fill the motor and it's 15 miles to the garage so I like it to be bird friendly weather. 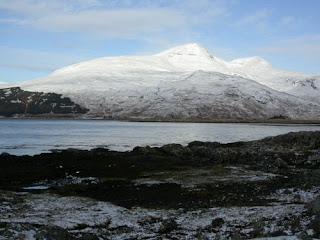 The heater in said motor hadn't even started blowing warm air when I noticed a Hoodie on the shore with a familiar lump in front of it. I hauled in as soon as I could and grabbed the gear and ran back to find the Hoodie pecking at what the Otter had left but no sign of the beast. There he is closer than I thought and I'm puffing like a steam train but he obviously realised I couldn't run any more! Very obliging. 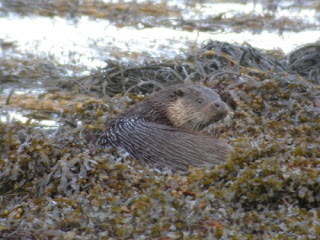 There were plenty of Buzzard and Kestrel about obviously trying to get as much food as possible before the next onslaught of poor conditions. I decided to pass the garage and carry on to Fidden in case the weather changed. First on the list were a group of 35 Golden Plover in the field where the Geese normally are. 6 Ringed Plover, 4 Rock Pipit, 3 Oystercatcher, 15 Curlew overhead and then a single Pied Wagtail. That's the first Pied Wag I've seen this year on Mull - it's a long wait for some of these birds! The 32 Greenland White-fronted Geese were just past the farm but too close for comfort. I let them wander down the field before I attempted to photograph them. With the sun the wrong side of them it's not a bad effort. 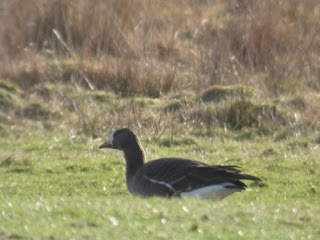 Back to the farm to see what finches were about - 30 Chaffinch and six Reed Bunting was all I could find. There were a couple of Grey Seals in the bay but not much else. I had to rattle a few shots off for the Bunt as a car was rapidly approaching. I say rapidly but as fast as you can go on a road full of potholes! 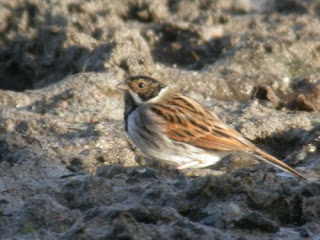 Next stop was Loch Pottie. Never a great place to see birds but it does attract the ducks. A scan with the bins found me an Otter - never seen one on this Loch before so a bonus there. A scan with the scope produced 18 Tufted Duck which is another uncommon bird on the Island.
After filling the motor a quick stop at a regular spot for Golden Eagle and there they were sitting on the top of the hill. Photo taken with full mag on everything otherwise you wouldn't be able to see them! 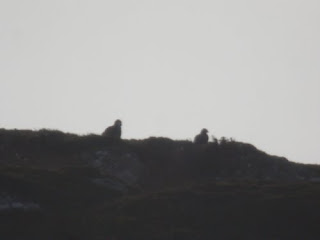 Next stop was Bunessan to see if the drake Gadwall was going to play nicely. After half an hour chewing the fat I thought I had better look for it. No sign until I'm driving out of the village and there he is but there's nowhere to stop. I gave it a full 2 minutes in the cutting wind and got this shot - I'm happy with it......for today! 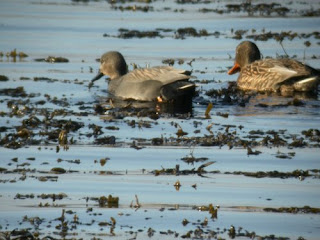 My next stop was in the middle of nowhere near the seaward end of Loch Scridain. A decent place to scan the ridges. Nothing, nothing, nothing.......Buzzard with another bird that looks different...and a bit grey...male Hen Harrier woohoo! Keep watching...... another Buzzard then a female Hen Harrier join the growing crowd...a bigger bird in the background to these 4....a juv White-tailed Eagle. All in the same view was pretty impressive I thought. Another adult White-tailed Eagle was way off to the right of this crowd and two Buzzards right overhead. A nice busy little spell.
That was me heading for home after that. This Hoodie was the town cryer for the day, standing on the post shouting to anyone who would listen. I took notice and a photo for posterity. The rest of Loch Beg had 2 Goosander, 35 Teal and 4 Little Grebe with the usual array of waders and gulls. 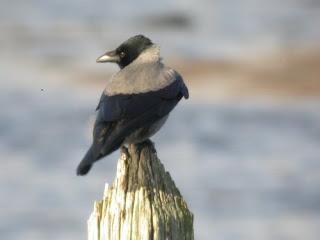 You forgot to mention the 8 Bird Club members you spotted