I'll start with last night's moon which rose huge and golden over the mountains - what a sight! A bit later on in the evening as the moon was high and casting it's silvery light you could hear a Tawny Owl hooting in the background and a few Golden Plover 'pee-oo' on the loch.
Anyway, this morning was nice and clear so I was off the mark early. I checked the loch for last nights Golden Plover and they were still there, a tidy group of 10.
The view of snow capped Ben More was breathtaking with the clear blue sky as a background. 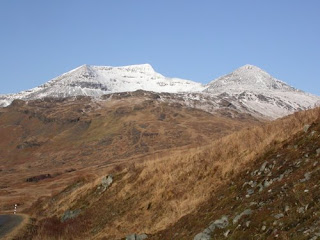 Not much sign of any birdlife except Hooded Crow, Buzzard and the odd Raven. Lots of Red Deer were trying to eke out a living down in the glen but it was that quiet you could hear the snow melting. While looking down over these lochs I could see some ripples on the near shore of the furthest loch. As I waited for something to surface a ringtail Hen Harrier took off from the lochside and landed in the water - bathtime! Another ringtail approached from further back and chased the first one off and then had a good wash in the same place. Not something I'd seen before so it was notable.
There was a gang of 8 Hooded Crows up behind me making a nuisance of themselves but it was just general banter between the birds. Looking in the larger patches of snow there was a superb print of where a Hoodie had taken off, footprints in the middle and primaries spread either side. Also lots of vole tracks with little footprints and a line where the tail was hitting the snow. 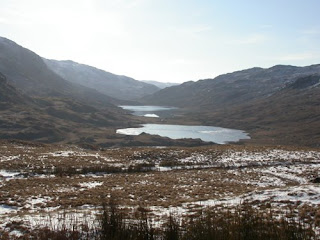 This next shot of the Golden Eagle was a treat. I saw the bird flying so I hauled in as soon as I could but it landed on the top. I decided to wait and wait.....and wait..........then she was off again. It was a struggle to get this but it looks ok! 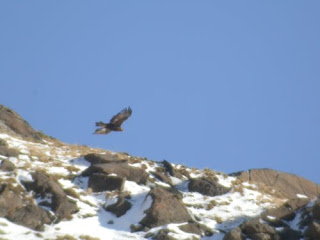 As the sun was beating down and creating a bit of heat I thought I'd give the Adders a go on the off chance. The first 2 locations were a bit damp but third time lucky there was one basking. It had obviously been there a while as it looked quite alert as I approached. Nice and easy does it....superb! 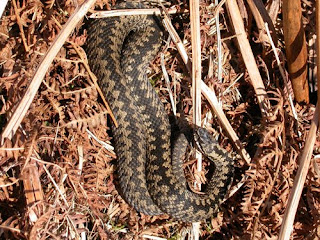 A close up too. 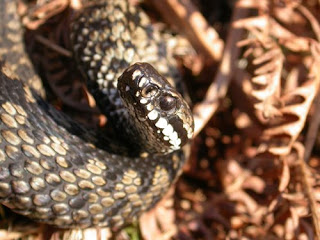 It was way past lunchtime now and time to be heading back but not before checking the loch. As I was scanning around I could hear a Buzzard mewing and a Raven alarm calling and turning around there were 2 Buzzard and the Raven having a go at a Golden Eagle. I managed a couple of shots but they weren't up to the earlier photo. Scanning the ridges on the other side of the loch produced 2 adult White-tailed Eagle circling low over the ridge and they soon dropped against the land and then moved out of sight.
Back on the loch I'd picked up 4 Razorbill, 4 BT Diver, 2 RT Diver and 8 GN Diver but nothing close enough to attempt with the camera until this one surfaced. I only managed the one shot as he was a fair old distance away when he next came up. A cracking day out though! 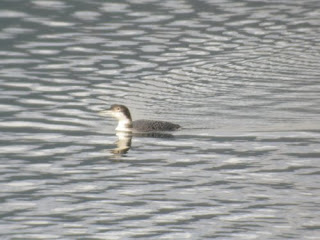 Definitely what i would call a great day watching wildlife. Surprised to see Adders though, thought it might be a bit parky for them.

It was very much on the cold side but the sheltered spots warm up quick. I'm sure you'll get them up Harthope on a sunny day in Feb!