The last few days have been a bit driech and not much has changed out there. Last Wednesday was an absolute corker of a day and I was in Fort William with no optics. My best sightings on that day were in Glen More, in the dark, 3 Mountain Hare looking very white and at the Corran ferry where I had 2 Turnstones and a Shag at close quarters.
The big changes over the last few days has been the amount of birds singing now. The Chaffinches are very pleased with themselves, you'd think they'd just invented singing. The Dunnock's mate has returned which prompted him to start singing and the Robins have followed suit.
This mornings treat was a Skylark bursting into song - fantastic to know they are back in the area although these initial birds may not stay to breed here.
Off for a short walk this morning so I thought I'd give you an idea of the patch. The closest piece of water is tidal with a river running into it then you have Loch Beg and finally Loch Scridain. If the photo opens you might get a better impression. In the photo the tide is in and shows all the channels where the birds can hide when the tide goes out. 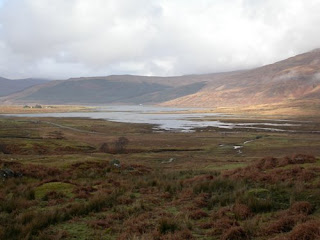 The place we were heading for today is Derrynaculen farmhouse. On the walk out here we saw very little in the way of wildlife, 1 Raven, 1 Buzzard and a couple of Hoodies. It doesn't really matter where you go on the Island you always keep one eye on the ridges and sure enough a Golden Eagle cleared the ridge just as we arrived at the destination. 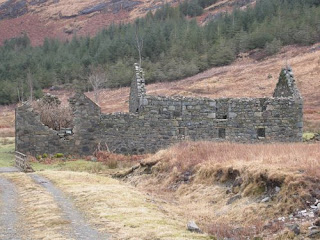 This Ash tree with the holed trunk is a an attraction for photographers, artists etc. Probably one of the most photographed trees on Mull and I've got my shots of it now! 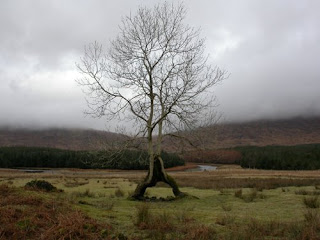 This one looks like the Ash tree is storming the farmhouse. I like the small trees growing out of the top of the walls too. As we were departing we had the female Golden Eagle again closely followed by the male but no display from them. 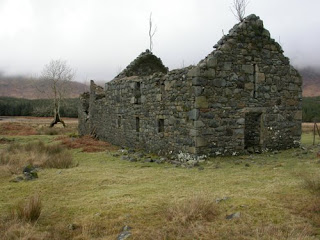 Back home for lunch then out round the other side of the Loch. The tide had dropped so scanning for the waders turned up 1 Golden Plover, 1 Goldeneye (I know it's not a wader but it was there to see), 2 Greenshank, 12 Redshank, 2 Turnstone, 10 Ringed Plover, 1 Dunlin, 8 Curlew, 6 Lapwing, 22 Teal, 14 Mallard, 2 Little Grebe, 8 Grey Heron and eventually an Otter too.
Onto Loch Scridain where there were quite a few RB Merg and Shag but it was a bit of a struggle for the Divers. We had 5 GN Diver but no sign of BT or RT Diver. The last treat of the day was this Slavonian Grebe that showed very well and would have been a better photo if the weather had been better! An Otter hauled out a fish just before we left too. Once finished he was back in the water so we left him in peace. 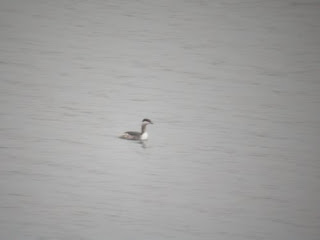