Another cold day with an icy wind to top it off. I'm almost tempted to wear a coat but I'll tough it out for now!! There is a fair bit of heat in the sun if you can find the shelter. As you can see the water on the shore has frozen but the bird bath and the Herons drowning pool remain clear so it's not cold enough for a coat yet. Logical or what??!!! 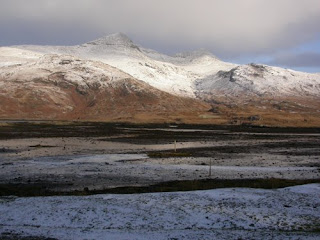 A quick glance around this morning produced very little so I was heading for the North side of the Loch today to get out of the wind more than anything else. It wouldn't be great for photos as you always have the sun glaring unless you get real lucky. A nice drake Goldeneye, a female Goosander and a Greenshank had me stopped and trying to work the magic. I'm that good I never saw the Goldeneye again, the Goosander went for the water speed record and that was before I'd stopped! The Greenshank was too intent on feeding though so here's one for 'Dusty Bins'. It's not a great shot but the camera was completely freaking with the light conditions and a pale bird. 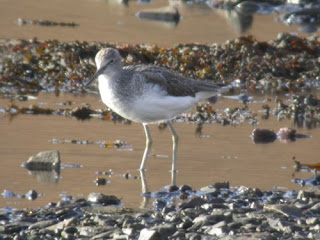 I had a scan for the Goldeneye again and couldn't see it. A tell tale splash further up the Loch was an Otter and then another one surfaced a couple of yards away from the first. You know where I'm heading next....but a look behind before I head off. A Little Grebe scattering across the water....why? Another Otter out on a rock but just sprainting before it's back into the water. Sensible Grebe keeping a close eye on it.
I can see one Otter on the shore eating a fish so off I go. The last tasty morsels are just disappearing as I'm getting the camera on the scope - I won't have long. I got a few shots before she left and headed further up the Loch so there might be another chance. 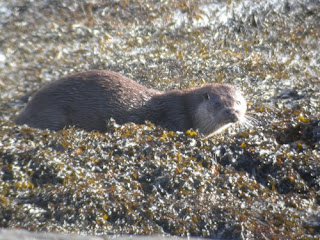 It must be nearly time for a snooze as she was out again about 100 yards up. She was fairly well tucked in so I had to do without the shelter of the motor. Gusty wind, glaring sun, it wasn't great and then someone turned up to ask what I was photographing - nothing now! I thought that was my lot but she came back out for a wash and brush up - cool. I was keeping half an eye out for the other Otter in between trying to get the camera to behave but I couldn't see it. Just as I was lining up for another shot the other Otter wandered through the view!! A dog Otter this time. There was a fair bit of shuffling about going on. He wasn't sure if he was welcome or not so he was in and out of the water and wandering round the female without looking at her....just in case. That's the dog creeping through the back of the shot - you can see the extra weight they carry! 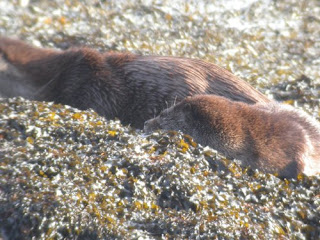 She settled down to sleep and he stretched himself out a couple of yards to left of her and dropped off to sleep himself. Time to leave them in peace I think. 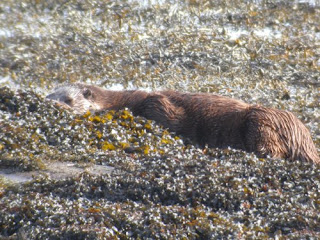 No other photographic opportunities presented themselves but I was happy with watching a Robin toughing it out with 3 Song Thrushes - they'll have a go at anything. A Grey Heron tried to make itself into a frost blanket for the windscreen. Not sure who got the biggest fright but I was safer!
Just so you can see it's not an easy life digiscoping - a bit arty but FUBAR!!! A good gust of wind caused that I think. 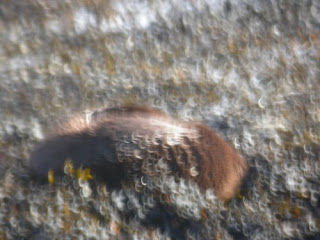