I set off this morning in search of the dodgy looking Eider Duck that I found yesterday to see if I could glean any extra information on it. Needless to say it wasn't there at all! After reading up on these Eider sub species it was clear that all races are variable in bill colour. Boulmer Birder has some cracking shots of Eider that look similar to my bird so I'll have to leave it as a Common Eider but I'll know better next time.
I did find a nice Rain Goose (Red-throated Diver) in the bay that was just starting get it's summer plumage. A GN Diver was in attendance too. Cracking birds but bad light so no photos of them.
After driving 15 miles for a no show I thought the extra 5 mile to Fidden would cheer me up with hopefully some nice birds on show. It was the right thing to do. As I arrived there was a break in the weather and the sun was shining for a good half an hour. The Barnacle Geese can be difficult to connect with at times as they do fly over to Iona to feed as well as roaming around the Fidden area. The flock of about 100 birds were reasonably close to the road so I took a few shots. Looking in the opposite direction there was a good number of birds on show. I had just finished counting the 61 Lapwings when everything lifted......Buzzard? Peregrine? neither of those as it was 2 ringtail Hen Harrier, superb! Surprisingly the small birds settled down quite quickly and didn't even budge when one of the Harriers crossed the field they were in, a bit odd I would say! Bear in mind there were about 100 Starling, 29 Golden Plover and 12 Skylark along with the Lapwing and none of them batted an eyelid! 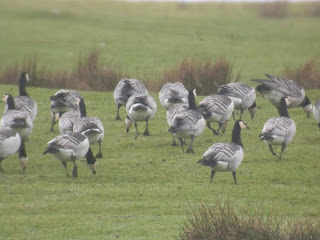 A couple of hundred yards further down the road there were at least 6 displaying Ringed Plover along with a smattering of Starling and Lapwing. I love these Green Plovers. The display flight, the noise of the wings, the pee-wit calls they make and the way they change from an essentially black and white bird in flight into something completely different when they land and the sun catches them - always a treat. 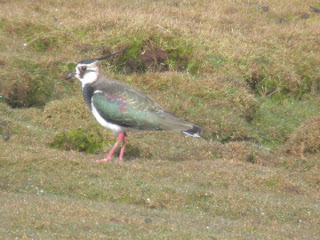 Around the sheds at the farm there are always a few finches, buntings, larks etc you just never know what you'll get or how many. The stars of the show today were the Reed Buntings. I was trying my best to get some shots of the 15 Skylark but the light was failing and they were running around an awful lot. I noticed a few birds flying in from my right and landing not too far away but just out of sight. I turned my attention to these closer birds to find it was 8 Reed Bunting and they were starting to show well. This bird stood still long enough for me to get a decent shot. 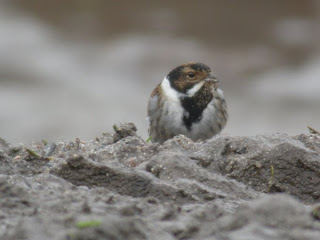 It wasn't too long before the Skylarks took flight and the Reed Buntings followed. Next on the hit list were the Greenland White-fronted Geese. As I was approaching the field where these birds spend a lot of time one of the Hen Harriers put in another appearance. It had been sitting close to the road eating what looked like a vole so as it flew off with prey in talons I just waited. Not too far up the road it dropped again but out of sight. It soon lifted again, talons empty, and started hunting again but it was too close for me to get out of the vehicle to attempt any photographs. Mastering a blustery wind can't be easy so it's great to watch the small adjustments needed to keep the bird on track - a stunning display of agility. Too many distractions down here...I noticed a Buzzard approaching from the left hotly pursued by a Raven 'cronking' like mad and when I looked back the Harrier was gone.
For once the WF Geese were not that jumpy although I did get out of the passenger door and got the scope without the birds being disturbed. I had just taken this shot when the Harrier reappeared further up the road so I swung the scope round and it was gone again - damn! I took a few more shots of the 23 WF Geese and then moved on. 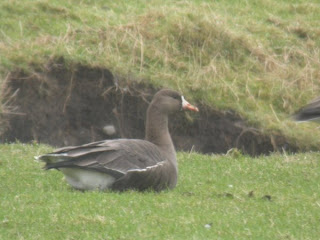 The rain was coming in again and the wind was picking up so I had a scan around the distant shore. 10 Shelduck were notable along with good numbers of Herring and Common Gulls.
On the way back I noticed a few Rock Dove dropping down so I hauled in to get a couple of shots. With the wind howling and nothing to shelter behind I was lucky to get this. The males were in full display puffing their chests out and hassling the ladies. As you can see from the left hand bird it too cold for any of that! 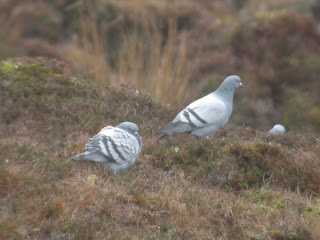 Another check in Bunessan to see if the Eider was going to put in an appearance but it wasn't to be. No sign of either of the Divers but I did complete the set with this Black-throated further down the road. It was keeping a very low profile in the water for some reason. There were Common Seals around but they would attack from underneath given the opportunity so that couldn't be the reason for the low profile. Another puzzler. 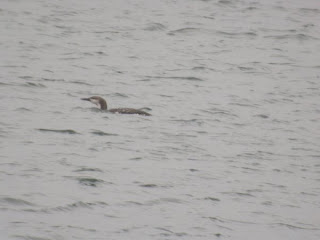