The shop was closed today so we had plans for a walk. There were clear skies last night so we knew it would be icy conditions today but the forecast said the weather would be good until about 3pm.
Just before setting off this morning I heard a Greenfinch singing so I scanned the trees until I found it. They seem to disappear in the winter probably to another part of the Island so it was nice to see they are on their way back.
We were heading for Loch Ba today and it's been a bogey walk for us for a while. The weather has beaten us every time with rain, gale force winds, thunder and lightening but today would be different with a bit of luck! We stopped along the shore of Loch na Keal in a couple of places to get a few birds in as we knew there wouldn't be much up Loch Ba. First stop produced 1 BT Diver, 3 GN Diver and 2 Black Guillemot and the second stop gave me an opportunity to photograph these Red-breasted Mergansers. As soon as the scope and camera came out the birds decided to go for a swim but I managed to get this shot of the male and female in the same frame. 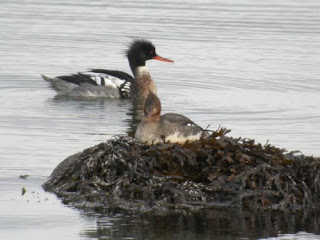 We set off on the walk with the wind in our faces and it wasn't too cold but the various streams that come off the hill were in various stages of freezing. The walk is approximately 4 miles and flat - just right for me! Not too far in and a Common Snipe exploded from the side of the path and away into the distance. While there were no birds to watch I was busy crunching my way through the iced over puddles or looking at the ice formations on the overhangs at the side of the path. I'm sure I'll find one that's worth taking a photo of but it's still fun to break the fresh ice or crunch though the virgin snow!
The woodland areas along the loch are made up of Birch, Hazel, Oak and the odd Holly tree here and there. They are all wizened with age and the harsh conditions - fascinating to look at. We actually found some birds in there too but not many. A Buzzard was the first one we disturbed rapidly followed by a Robin and not too much further on we found 3 Mistle Thrush, 5 Fieldfare, 2 Blackbirds and 3 Lesser Redpoll.
We were nearing the top of the Loch so I thought I'd better take a snap of where we had come from. The field area of this photograph is where we saw 5 Golden Plover on the way up but on the way back we picked up 16 Golden Plover and 2 Lapwings - superb! As we approached the loch again there was a flock of 8 Wigeon (the only birds we saw on the water) and a fly by of 7 Curlew. 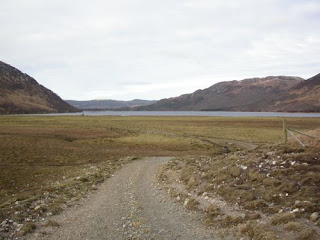 Another surprise find were these Hazel catkins. It's obviously reasonably mild in this area. There was a small, broken, tree stump that had a collection of Hazelnuts scattered around. This was the scene of a wild party held by the local mice as we don't have Squirrels on Mull. 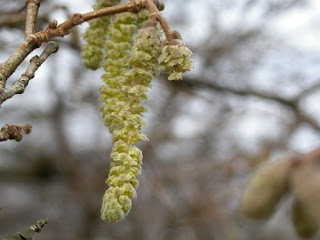 Next one for the hungry eye of the camera was this bracket fungus - nice. 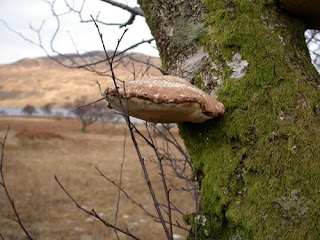 At last I found some ice that was worth trying to get some shots of. It never seems to do it justice but at least I tried. Spiky formations always look good but you don't get the added extra of the sound of the water gurgling underneath it. Quality stuff though. 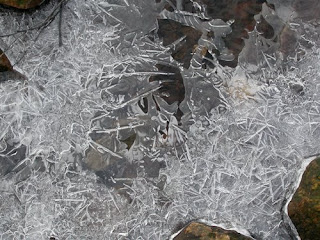 The next shot looks like a real cold one with the ice covering the small rocks and the ice gargoyle clinging to the side. The gargoyle part actually looked like a Seal so apologies to the Seals for that! 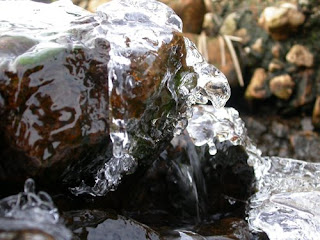 This next shot was taken looking further up the glen and in the centre of the shot, at the base of the snowy hill, is a settlement. Pre Highland clearances there used to be 800 people living in the Loch Ba area - unbelievable! 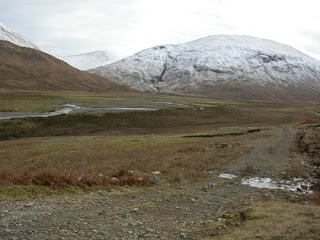 Another shot of the settlement but zoomed in this time. 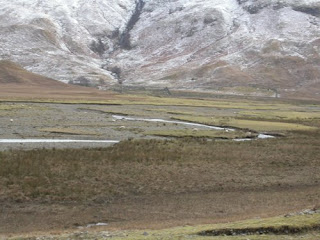 We could have carried on from here but the clouds were starting to gather and we didn't want to get caught out again so we headed back.
A super-wide angled lens or a panoramic view would have been a better shot than this but it was just to capture the snow on the hills. 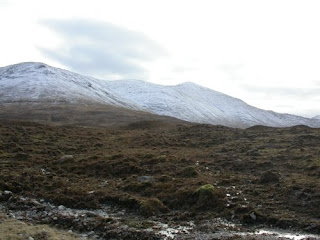 I actually took some shots of this fallen tree on the way up the loch but as we approached it again the sun was shining through and gave a much nicer feel. Not a moment too soon either as the sun was swallowed by the clouds at this point and you could feel the temperature drop. 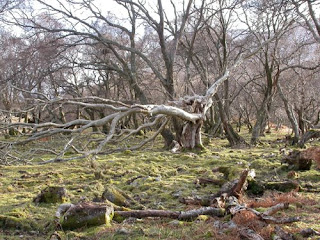 As we neared the end of our walk there were 11 Red Deer, hinds and youngsters, grazing on the top of the rise. The camera was out but the settings were not right so I missed the whole group but I did manage to get 5 of them!
We were pretty well walked out and in need of a nice cup of tea and musing over whether there would be a welcoming party for us with a medal presentation etc. after all this was our bogey walk laid to rest. We got our medal in the form of a stunning Grey Wagtail in one of the burns! 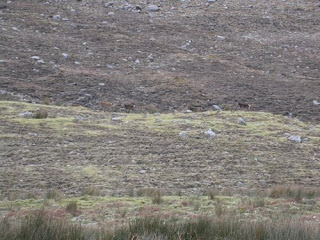