The weather has continued to thwart any ideas of going out to have a nice day so the best I can offer is a large amount of views and a small amount of birding!
This first one of a double rainbow was from Monday evening but it gives you a good idea of what the rain had been like through the day - not much of a view behind the rainbow. The previous day someone had seen a White-billed Diver in Laggan Bay and initially I was determined to give it a go but the strong westerly wind with driving rain put me off - soft or what? Tuesday was rained off as well. 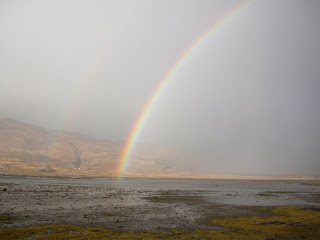 With the weatherman predicting a pleasant day today I went out hunting for all things elusive. The WB Diver had been looked for and not seen so I thought it best to go anyway. If nothing else it's a change of scenery!
It had snowed overnight and the roads looked a bit icy but the sun was out. The roads were fairly clear and the Buzzards were out in force either wheeling around or perched up, GN Divers seemed to be out in force today with 5 counted along the shore of Loch Scridain. I didn't stop as it was an hours drive to Laggan Bay. The Red Deer were on show obviously driven off the hill by the poor weather. I met a friend on the road and he regaled me with a tale of 5 Otters on the hillside - another 15 minutes of chewing the fat before I moved on.
I laid eyes on an Otter about 5 minutes later but he moved off quickly and too far away for a photo - this was to set the scene for the rest of the day! The weather appeared to be closing in too! I'm out now so I'll stick with it come rain or shine. 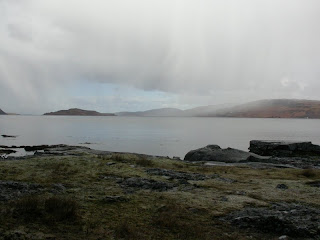 I got round to Laggan Bay and started searching around - 30+ Lapwing, 2 Shelduck, 18 Oystercatcher, 10 RB Merg and a close Slavonian Grebe that wouldn't get in frame for a photo. I kept on looking and found a Little Grebe on it's own with a white looking bird moving through the background. On closer inspection it turned out to be a male Long-tailed Duck - cracking but too far away for a photo. No sign of the WB Diver after an hour long search but I did get 3 Black Guillemot and another Otter. It had been quite pleasant while I was there but I could see something ominous out on the horizon so I made tracks while I could. I stopped to take the of Ben More covered in snow when I heard a Buzzard mewing and on looking round there was a Golden Eagle clearing the ridge behind me. I did take some shots of it but they were hopeless - no surprises there!

I got to the head of Loch na Keal where most of the birds seem to gather and found a flock of 20 Wigeon and about the same of Goldeneye. I parked up for a scan about and there was an Otter just disappearing from view round the near shore. I waited for it to reappear which it duly did and flushed about 15 teal off the near shore and then promptly disappeared never to return. I satisfied myself with a photo of the remaining Teal. 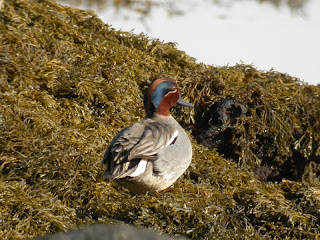 This Grey Heron was waiting for his turn in the limelight and when I turned the camera on him this was the result.... 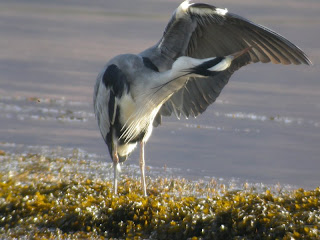 A scan round the rest of the loch gave me 18 Slavonian Grebe and 5 GN Diver to add to the list by which time the weather had caught me up. I drove back along the South shore of Loch na Keal in a raging blizzard but I still managed to see a couple of Mistle Thrush, 6 Redwing, 5 Skylark, 2 Stonechat and I had a better look at the Stags too. 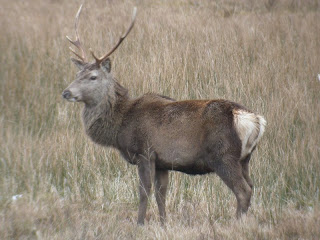 That would have been the end of this entry on the blog but as I was typing this up some friends of ours came into the shop. They had been out walking and had come across a Golden Eagle pellet. Another item for the nature table! 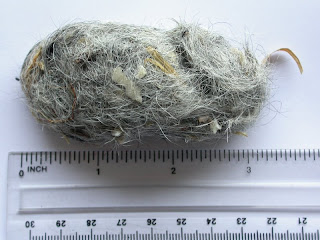 Like the Heron shot Brian, lovely pose and great caption.

All of your photos are fabulous! I am in awe over all of them. Love the heron photo and the eagle pellet. Very interesting stuff.

Congrat on this post, a very nice one. I love the teal shot!! A wonderful one.