Saturday was a fairly overcast day but I still bagged a couple of Golden Eagle that were out enjoying the wind. They would gain a bit of height then turn tail to the wind and go screaming into the hillside then head skywards to do it all again. One of these sorties bagged me a male Hen Harrier who, I'm sure, got the wind up with two Goldies coming at him!!
Migrants are still few and far between but you can see the change in numbers of birds if nothing else with the likes of Lapwing and Skylark very noticeable now. It was nice to see these 6 Whooper Swans that probably dropped in last night and no sooner did I have them photographed they were on their way again. The ringtail Hen Harrier was quartering the area around the Whoops but I'm sure it wasn't responsible for seeing them on their way! 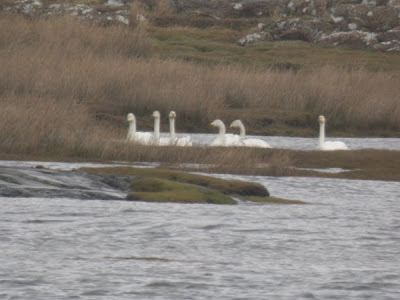 After putting up a new shop sign this morning I thought it might be an idea to see if there were any Wheatears around. These birds seem to appear along the Eastern side of Mull a couple of weeks before I get them on my patch so I was heading for Loch na Keal. It was hard to miss these two White-tailed Eagle sitting in the conifer trees. A lovely couple, side by side, with the female bird just about to give the male bird a cuddle (or a slap for eyeing up some other bird - what's he looking at anyway?). 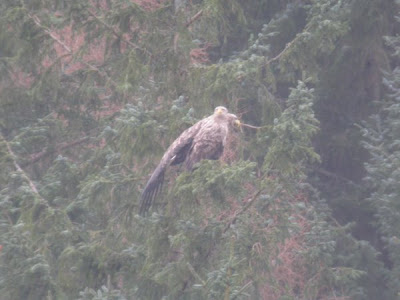 It was blowing a bit of a hoolie on Loch na Keal but it was a pleasant afternoon of birding. We flushed a Redwing from the side of the road that just didn't bother stopping once it took flight and then a couple of Mistle Thrush that did the same thing. I had to get out the motor to see if there was someone strapped to the front chasing everything off - there wasn't though. The birds on the water were behaving in a better manner with some cracking views of Wigeon, Red-breasted Merganser, Great Northern Diver, Slavonian Grebe and Black Guillemot. The Oystercatchers on the side of the road are absolutely stunning and so are the Curlew that are starting to grow in numbers now. A decent number of Shelduck (10) were fighting against the stormy wind near Inch Kenneth
A rare bit of shelter gave me an opportunity to get the camera out for this Raven that was working it's way along the rocks with it's mate. 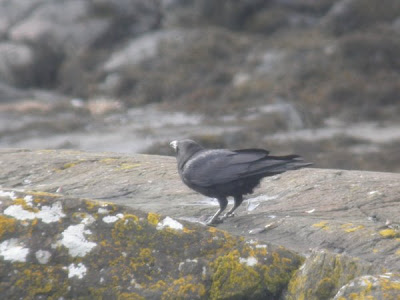 The group of Stags that I saw yesterday were still grazing the same area so another photo of them was had. It won't be too long before they lose the antlers and look a bit strange for a while. I'll have to try to get some shots of this transitional period but don't hold your breath! 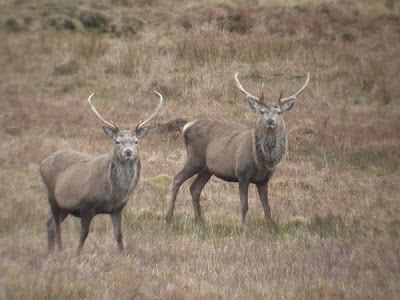 A quick check to see if the WT Eagles were still cuddling up but the tree was bare. The birds were just in the process of leaving, so watching them circle round before disappearing from view was a treat.
Posted by Bryan Rains at 16:57

Raven on the rocks, a sight soon to be regular at Howick Haven the way SS is going.