Today it is mostly raining.... 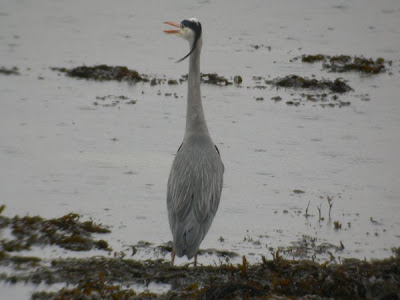 "Read all about it!!"
Monday was a complete blow away day and that included the washing that had been hung out! Despite the high winds I made an attempt to get out as it wasn't raining. As soon as I had got myself in the motor and I was waiting for some traffic to get past a large bird appeared.......an expletive was uttered......White-tailed Eagle labouring against the wind......only about 50 yards away and no chance of getting the camera - what a sight though. I had just enough time to get Little Yin outside for a quick view before it disappeared round the trees. About 4 hours later we noticed the birds on the near shore leaving in a panic and it was the White-tail crossing back over the loch.
It was looking like a pleasant day when I stepped outside this morning but it clouded over and the heavens opened - hmmmm I'm still going out! Checking out Loch Beg was a real treat as the water was flat calm, the Curlews were displaying and a few Snipe were calling too. Rock Pipits chasing each other about, a Pied Wagtail chirruping to itself on the shore, 3 female RB Mergs with a single male were 'grazing' the shallows for fish and I call this my office!! A Red-throated Diver put in an appearance but wouldn't stay up long enough for a bad photo never mind a good one. Great Northern Divers were visible for miles down the loch with at least 10 counted in the view that I had.
An Otter was soon on the list and heading away from me so I moved on to get in front of it and just waited.........just enough light to get a snap! 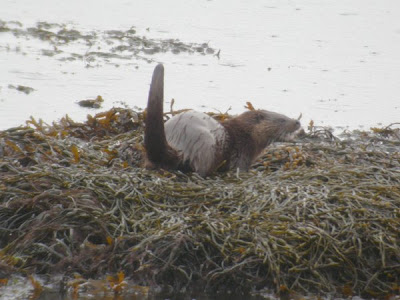 The Heron at the start of this post flew in as the Otter moved off. I followed the Otter as it made it's way towards the middle of the loch at speed and I was surprised to see a Common Seal surface right in front of it. They don't interact too much but I was pleased to see the Seal just carry on swimming. I turned back to the Grey Heron on the shore and he was at full stretch and looking good. They look absolutely splendid in these light conditions but the photographs never do them justice. It takes something for a bird to shine in dull weather but these guys manage it.
It's nice to see a bit of Summer plumage coming through on the GN Divers and you can make out some of the spots on the back of this bird. It won't be too long before there are some tasty looking birds around! 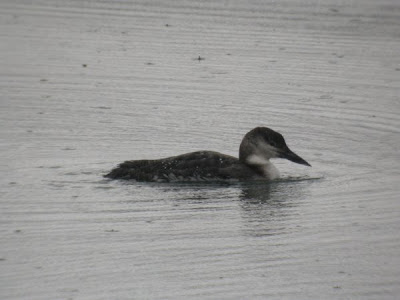 hello, my name is gary storey and i am a young (20) keen birdwatcher. I am coming to mull over easter from newcastle to try and get as many sightings of WT Eagles and Goldens while i am there for the 3 days i am there as well as all of the other wildlife on the island. was just wondering if you could e-mail me some good birding spots to go to on the island which would provide the most chance of seeing these birds. also good sea watching points to get views of GN Divers and other sea birds
i would really appreciate your reply.
thanks

Hi Gary - there is enough info in the blog to get you what you want. There is an element of luck involved,just keep you eyes open, but if you want extra info get a copy of the Mull bird report when you arrive or book yourself a tour with me or one of the other tour operators.

thanks very much, looking forward to the trip up!