Saturday was a cracking day but not a lot of birding done. I did step outside early doors to hear my first Willow Warbler of the year and after finishing the blog a quick look around produced a couple of WT Eagle flying over the ridge and 3 Greenshank feeding in the shallows.
Sunday the skies were blue and the temperature was well up - stunning! We had a decent start to the tour today with 3 Mountain Hare running about, my first Linnet of the year and some good views of Wheatear before we picked up a male Hen Harrier. Our next stop gave me an actual sighting of Willow Warbler but with plenty of these birds around today it was no surprise. Two juv WT Eagle cleared the ridge behind us as we looked for the warbler and gave a great display as a Kestrel tried to chase them off and a Buzzard kept it's distance from the big boys. Another sighting of WT Eagle at lunchtime was probably one of the birds we'd just viewed and a distant Golden Eagle was disappointing in the heat haze. This Adder was taking shelter from the heat under a vehicle - a nice surprise as I couldn't find any on the moor!

Just as I was packing away the lunch we finally got our views of Golden Eagle as one came gliding across in front of us then moved off to gain height. It was nice to see the bird against the forestry to see how much colour these bird have - not the best of photos but it shows the colour on the top of the wings. 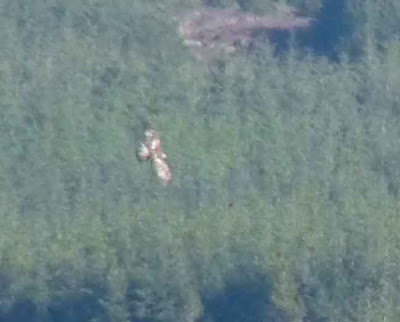 A couple of Greenshank and an obliging Otter were next on the list before we found a cracking male Grey Wagtail. The Grey Wagtails seem to disappear off island for the winter and this was the first decent view I'd had of one this year. We finished the day off with the WT Eagle on the nest and some close stags that have lost their antlers.
Monday was a day of chores but cracking weather to go with it - sunrise was a bit like this... 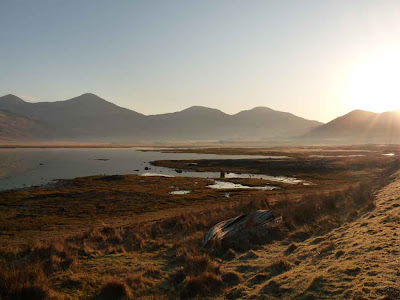 I headed off round the loch for a meeting and along the way I saw a large bird disappear from view - you have to stop and look.... 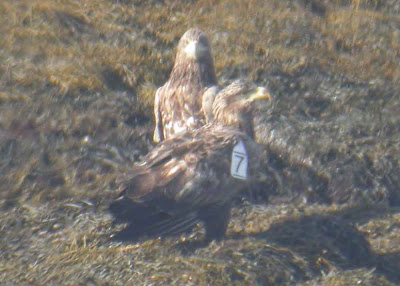 ...White 3 and White 7 sitting together. Not a bad start. They were still there on my return an hour later but the heat haze was terrific not so for the photo of this Dog Violet though. 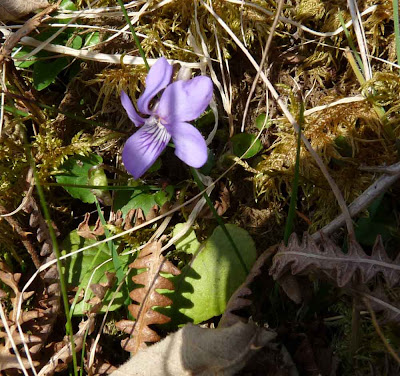 With the motor cleaned and polished I had to take the wee car for some petrol. I know that everyone is complaining about fuel prices hitting £1.20 but it's an extra 10p on top of that for us!! Anyway, along the way I bagged 100+ PF Goose heading North and also my first Chiffchaff of the year. Not bad for a busy day not birding.
Tuesday the cloud rolled in as a front passed over us and cooled things down a bit. Out on tour again and it was a difficult day. We managed to find a Mountain Hare early on with the regular additions of Golden Plover, Barn Swallow, Wheatear, Redshank and Skylark before we hit a blank spot. The best we managed was a WT Eagle calling but we couldn't see the bird. Lunchtime provided another year tick with a Cuckoo calling while sitting in the top of a conifer. Two WT Eagle soared in the distance and we finally connected with Golden Eagle as we were heading off. It took the rest of the day to find an Otter but it was worth it. The beast was asleep on a rock with the tide rising fast so waited for him to get moved on by the rising water. He slipped into the water eventually and swam along the shore before hauling out, rolling around and scratching. A great performance.
Posted by Bryan Rains at 19:24