The big and the small.

Wednesday was forecast to be a bit miserable but the threat of rain soon passed. We started the days tour with a brief glimpse of a male Hen Harrier before heading off to look for Mountain Hares. We located a single Hare pretty quickly but missed out on the Golden Plover and proceeded to have a quiet spell that gave no better than a few Swallows, Sand Martins and Willow Warbler. Our next stop warmed things up a bit with a WT Eagle calling from a spot that we couldn't view so we headed further down the road to see if we could improve things. Result - one adult WT Eagle sitting at the bottom of a cliff next to the sea. We also had a bonus as another Wt Eagle came from the same place and flew towards us before landing on the rocks down below. 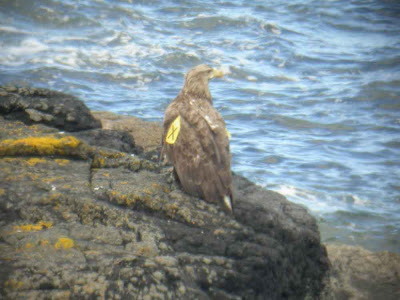 This bird is a four year old from Skye. If you check out the photos of the White tagged birds from previous posts you can see there is a tremendous difference in plumage from 3 year old to four year old. A Red-throated Diver flew past while we watched the eagle. Lunchtime produced the usual sighting of Golden Eagle plus a couple of Crossbills flew over. A year tick at the next stop was a single Black-tailed Godwit. We headed off in search of Otters next and we weren't disappointed with a single male offshore before we located another asleep on the shore. A Common Sandpiper was quite obliging while we waited for a GN Diver to surface. 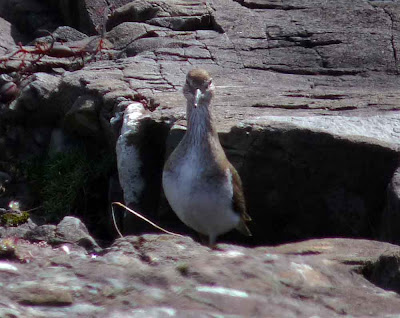 Another two Otters performed quite well just after we'd scrutinised this Rock Pipit. 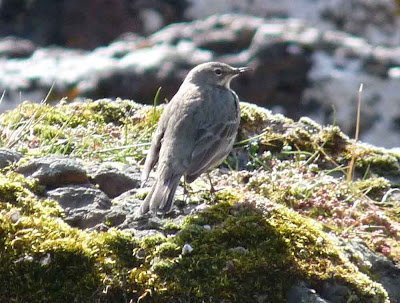 The return journey produced a good number of antler free stags - boy do they look odd!
Thursday was another trip out with guests. The forecast was not a good one, starting with rain, but the usual Mull climate won the day and we stayed dry. We looked for the Mountain Hares while the rain came down and managed to find two as the skies cleared. 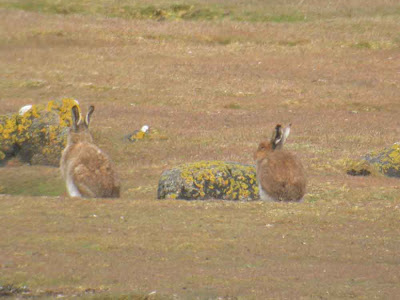 The Golden Plover were parading about in the fields again today, Meadow Pipits were everywhere and the odd Skylark gave a good display. Sightings of Common Seals, Swallows, Wheatears and Sand Martins kept us going until we picked up a Golden Eagle in flight. It was flying at low level and eventually landed in a Larch not too far away from us. It would have been a good picture but it flew off just as I got the camera out! It performed well and landed again before being harassed by Ravens. A flock of seven Common Crossbill, including three streaky juv birds, showed well at the top of a conifer. We had Otter on the list next as we located a male just waking up and having a scratch before heading off fishing. As the Otter moved off we picked up an adult WT Eagle flying along the ridge before dropping out of sight. We moved on and found 3 Bullfinch feeding quietly while we were watching a Robin. I managed to get a shot of the male Bullfinch before they moved on. 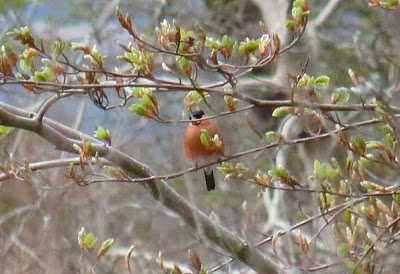 While viewing the two WT Eagles at the nest site this Wren completely stole the show. They normally find a perch and give a blast of song before moving on but this chap just stayed where he was! 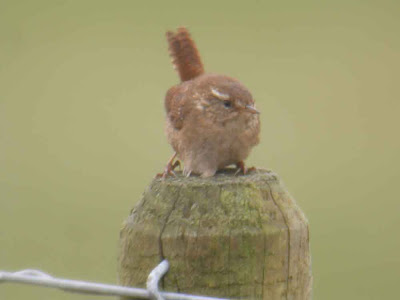 We'd had a cracking day out and comment was passed that Herons are much overlooked - they certainly are handsome birds. 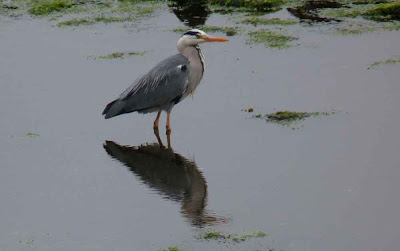