I had a run out yesterday to get fuel. The weather wasn't too bad but the wind was nithering to say the least! The tide was well in and, apparently, the worst time to see Otters so, just to dispel the myth, the first thing I got my eye on were two Otters fishing in a bay. I didn't bother with photographs and just watched them catching fish - cracking! I didn't have any plan in mind of where to go but I had been thinking about the last time I'd seen Pochard on the island so I headed to a freshwater loch to try my luck. I did get Whooper Swan...

...two Tufted Duck and two Goldeneye but no sign of any Pochard - I'll keep trying for those! I counted a group of 66 Greylag Geese in a field and that set me thinking again. I thought that the Greylags were fairly sedentary on the island in the winter along with the other geese. The WF Geese....

...are always in the same place as are the two flocks of Barnacle Geese. The thing was I'd seen a single Barnacle Goose with a flock of Greylags in the SW and also a single PF Goose in another area in the SW with another flock of Greylag. Now, a single Barnacle Goose was seen with a flock of Greylags in the centre of the island and I had a PF Goose with that same flock of Greylags with no sign of the Barnacle. I hope your keeping up! The central area is only about 20 miles away from both of the sites in the SW. Are the Greylags moving about and taking the PF and Barnie with them or is it the PF and Barnie that are flock hopping or even there could be two of each species involved. I had a good look through the geese in the SW and found neither of the odd birds. A puzzler for sure. On with the day....there were 27 WF Geese looking good as you can see from the photo above. A Grey Seal was hauled out on the rocks...

...a flock of 10 Golden Plover rushed past, a couple of Lapwings were flushed by a Buzzard and another Buzzard was feasting on the remains of a Mountain Hare. 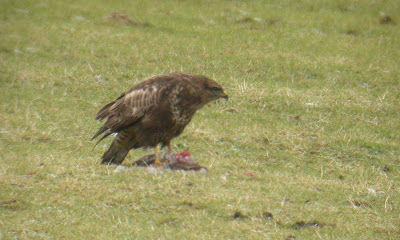 The only other notable thing was a flock of 10 Rock Doves feeding amongst the sheep - four was the best I could get in the photo.

By the time I got back the clouds had rolled in and then the snow started again - lovely!
Today I had PS for company hopefully to catch up with a few Otters. The weather wasn't looking too grand but there was just enough light to get some early shots. Five Crossbills flew over us just before we set off. We found a GN Diver that was showing well but the optics kept steaming up so it was a bit of a struggle to get this shot. 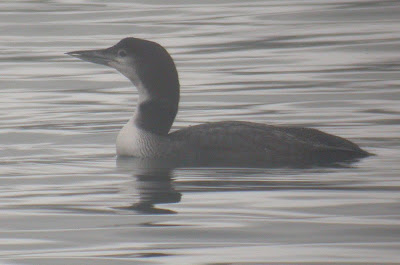 No sign of any Otter on the first run through but we did pick up a nice juv WT Eagle sitting at the top of a tree. While I was setting up the scope another juv bird flew off from the back of the tree!

Another two adult WT Eagle were sitting together a bit further along the road. We headed back to the shop to pick up some lunch as the sun started to break through. A quick run up the glen produced two adult Golden Eagle but the only decent shot was one of the female. 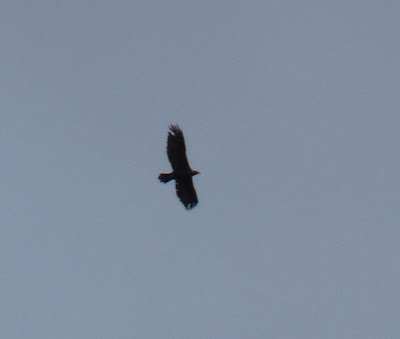 A Raven 'cronked' it's way past us as we watched the eagles soaring. 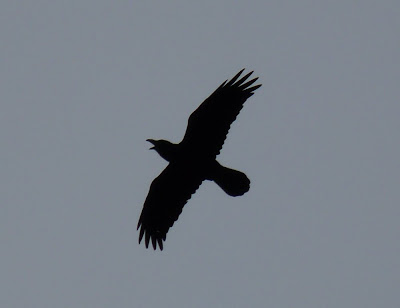 Next bird to be picked up was a cracking male Hen Harrier hunting the lochside just before we picked up our first Otter of the day. The Otter was fishing the centre of the loch so we headed off to find a closer one. It wasn't too long before we connected with a mum and two cubs. We watched from a distance as they fished one area before heading away from us. We followed them along the shore knowing we'd get better views eventually.

They came ashore just below us and travelled along the land for a couple of hundred yards.

You can see in that shot how much smaller the cubs are to the adult. We had a bit of time to wait before we could get into a good position to get some close shots but it was worth the wait as, I'm sure, you'll agree. 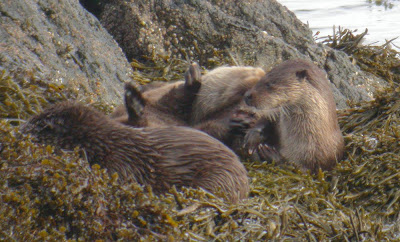 A bit of a roll about with mum for one of the cubs as the other ate a fish and then it time to get back in the water again. 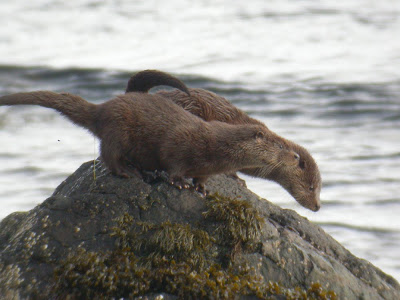 We watched these three for a good while with plenty of opportunities for photos before we left them settling down to sleep. As we looked for somewhere to turn around we picked up another two Otters but as the wind had picked up and the rain was starting we just watched from the motor before calling it a day!
Posted by Bryan Rains at 19:14

Another great day with good photos for those of us not on Mull.

So a typical day on a fantastic island. :) Fantastic WFG shots. Love to follow this blog.

Those last 2 otter shots were well worth the wait -- great stuff!