Tuesday was bright and breezy so I had a quick run out to see what was about. I called in on the WT Eagles to find the female standing on the side of the nest and the male sitting well down in the cup of the nest. A lovely sight and it shows they've put in a fair bit of effort to get things ready for the season ahead. I had a cracking GN Diver on the way back round but I just couldn't get a decent photo of the bird. I nipped back home for some lunch before heading out again just as it started to cloud over - typical! The temperature dropped and the breeze picked up so the best I could manage was a Shelduck... 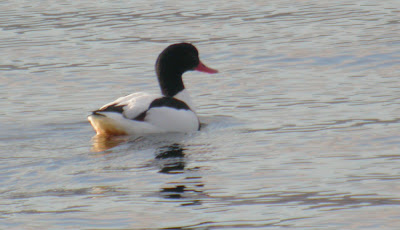 ...and a nice couple of shots of a Raven. 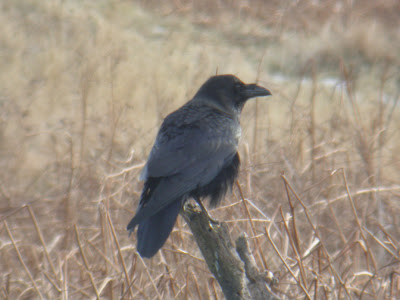 You can see how blue the plumage is in the second shot - stunning! 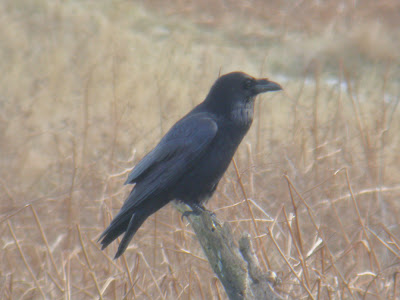 Wednesday was a white out and not a day for wandering about and Thursday was much the same. We had to go to Tobermory on Thursday evening but with the snow still falling and the glen road a bit treacherous we decided on an early run up by way of Salen. There was a Waxwing hanging around in Salen and we had enough time to try and pick the bird up while there was some daylight left. I'd been in touch with Dave, whose garden the bird was in, and he'd said the bird had not been seen for an hour or so. We arrived at his place to find we'd just missed the bird by 10 minutes! We settled down to wait with a cuppa and chatted away while scanning the surrounding area - nothing but Blackbirds and Blue Tits. It was starting to get dark and we would have to leave before too long then all of a sudden the bird turned up in one of the trees - result. There was no chance of getting any photos in the light we had, but it was nice to see the bird. Not just a year tick but a Mull tick too. I can't leave you with no photo so here is one taken elsewhere - this punk ROCKS!!!! 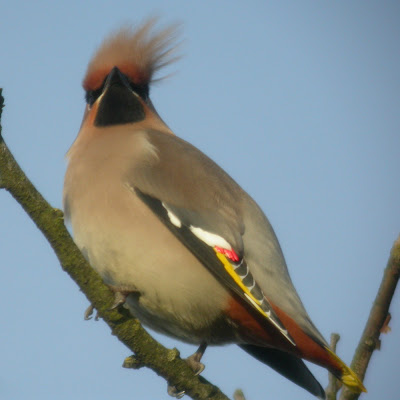 The weather conditions were not going to improve so we stayed overnight in Tob.
Friday morning was looking a little better when we set off. We called in at Salen to drop some apples off for the Waxwing before heading down the road. We hadn't got too far before we spotted a Buzzard cruising in the stiff breeze and another mile down the road we picked up a bigger bird doing the same thing. I stopped the motor and grabbed the camera to get a shot of the juv WT Eagle before it disappeared. 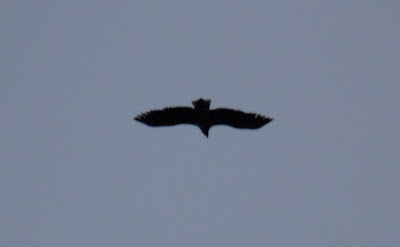 This was shaping up to be a decent morning! On Thursday there had been no ferries at all so as we were driving through Craignure we stopped to watch the ferry as it arrived. It didn't look like it was going to be an easy job for the Captain. 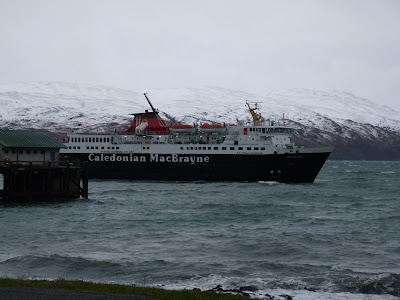 We were well down the road before the ferry finally docked. As we were driving through the glen two small birds shot across the road in front of us - chunky looking things they were. There aren't that many birds to be seen in the glen at this time of year and these little fellas looked like Snow Buntings to me. I jumped on the brakes and reversed to where the birds had disappeared but there was no sign of anything. A bit of a dilemma - we had to get to the shop to open up and the Snow Bunts would be another Mull tick for me - what to do? I started to drive on thinking I would just drive back up and hopefully search them out. I hadn't got 50 yards and 10 birds flew up from the grass and landed at the side of the road - brakes on, bins up, Snow Buntings - fantastic!!! The birds were very flighty so no chance of photos again so here's one from Speyside.

I did head back up the glen in search of the birds but there was no sign of anything but Hooded Crows. 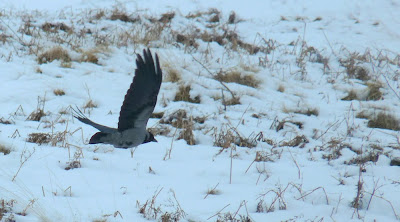 As I drove back down the glen 4 Snow Bunts flew up and went behind me. I decided to leave them and try another day so I headed to the loch for a look around. A couple of Little Grebe are still hanging in along with a male Goldeneye and a few Teal. The loch was fairly choppy but I could still pick out the odd Shag and GN Diver bobbing about in the waves. I'd almost given up on finding anything of great interest and while taking this shot of a Hoodie.... 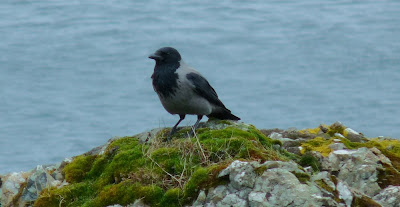 There's a cheeky chap! It was one of the mums with two cubs. I took a few shots and watched them fishing before they headed off. I turned around and moved to another position. As I stepped out of the motor 5 Crossbills started flying about and then settled in one of the trees next to the road. I managed to get a few shots before they left but the wind was howling round the scope. As the Crossbills flew off I turned around to look for the Otters and found I'd just missed them.

They were on a mission so I let them go and headed for home - phew!
Posted by Bryan Rains at 17:06

Nice to hear you got your 2 Mull ticks Bryan.