Monday I had a thrilling day typing up the diary and sorting out the photos from the last two months or so. It's done now so I'm one step closer to backing them up as it's been three years since I last did it!
Tuesday I was out on tour for a change. After the cold calm conditions of the last few days it was blowing from the NE. Absolutely BALTIC! Thankfully the cloud was high and broken but any heat the sun had was stolen before it reached us. While I was waiting for the guests to arrive I watched an adult WT Eagle come down off the hills and settle on the rocks in the middle of the loch. We raced along the road to get a better view and lo and behold....it was gone! We could hear gulls alarm calling in the only direction we couldn't view so that was the end of that. We headed back the way we came in the hope the bird may be still flying around but no luck there. Our next stop did get us WT Eagle but this time a juv being harassed by a Raven. We drove on keeping an eye on the ridges but nothing was flying. A lone Buzzard crossed our path to keep the interest going. The next stop was a real treat as we located a Golden Eagle on the hillside on a fresh sheep carcass.

We watched the bird for a good half hour hoping that another bird would join this first one. There were plenty of Hooded Crow and Raven but nothing else turned up. We headed back down the road in search of other things. There were plenty of stags on view but this collection of hinds that were out 'human' spotting were worth stopping for. 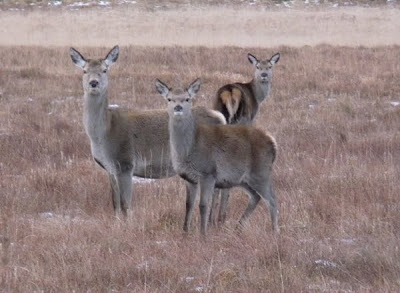 'Are they humans there, look?'
Off to look for Otters next. The loch was quite choppy as we headed round but there were some sheltered spots. We picked up the likes of RB Merg, Redshank, Curlew etc but no sign of the furry beasts. Another stop and another look gave up a GN Diver or two and the appearance of two large birds in flight coming towards us. We held firm as the birds approached and got stunning views of the two WT Eagle as the passed right by us! 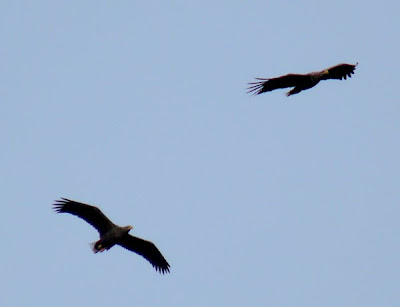 The road wasn't too bad but there were a few treacherous places along the way. We were advised not to go much further as the conditions were worse further along. We headed back the way we came still looking for the elusive Otters and connected almost immediately. I caught a glimpse of an Otter taking to the water and got everyone onto it before we moved closer. The better position revealed there were two youngsters on the shore as well as the female in the water - tremendous! As with the Goldie earlier on we had prolonged views as the youngsters tumbled around the rocks and into the sheltered parts of the small bay with the female occasionally bringing a fish in.

We pressed on when we'd had our fill. It was slow going at first and a relief to get onto clear roads. A quick, quiet, lunch had us nicely warmed up and ready for some more action. A few Buzzards along the way set us up nicely for the Golden Eagle that flew over the top of us as we watched a group of Common Seals 'bottling' in the bay. 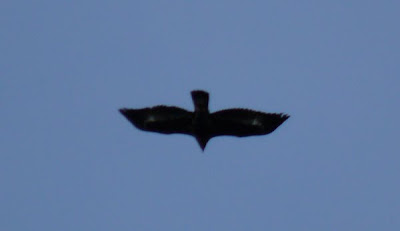 A single Fieldfare was a decent find.... 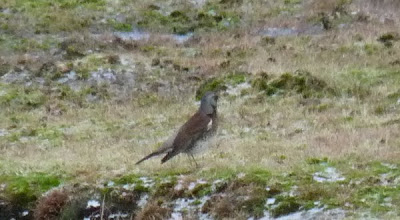 along with a few Meadow Pipits. 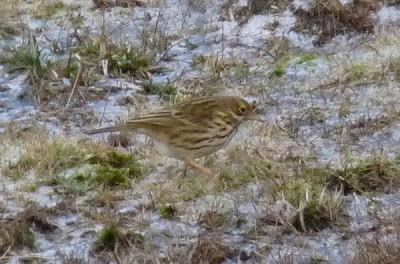 There are plenty of areas for these birds to feed in better weather so they can be hard to locate at times. A few Rock Doves.... 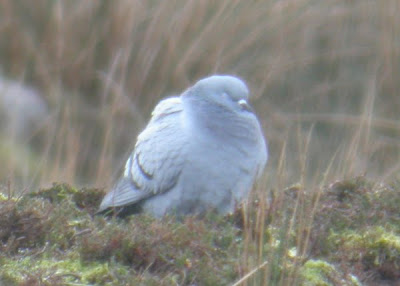 ....were on the opposite side of the road and another Golden Eagle perched on a hilltop. The eagle took flight and dropped out of sight - that was our cue to move on. We headed for our last stop of the day and the place was heaving. Lots of Meadow Pipit, Rock Pipit, a few Snipe and a cracking Grey Plover!

Shame about the lack of light and the hefty breeze. A single Pink-footed Goose amongst the Greenland WF Goose.

There were about 80 Golden Plover in the fields with a smattering of Lapwing and Skylark amongst them. 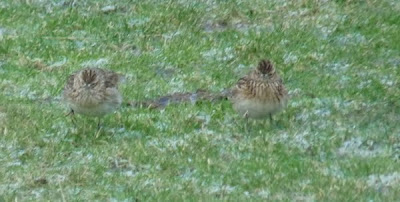 Hi Bryan & Joy,
Just a short note to wish you all a very Happy, Healthy and prosperous New Year. Keep following your blog and find your writing very good and amusing. Can't wait for next July when the Kippers will once more be in residence on Mull.
Kind Regards

Cheers, Malcolm. All the best to you too (and the rest of the guys, of course.)

I've certainly enjoyed reading your posts since I found your blog a few months back, and am looking forward to your posts in 2010. You got some great shots this time of the otters and the eagle feeding on the sheep carcas.

The Jan 2010 issue of National Geograpic has an article entitled "Sublime Scottish Islands: Edge of the World" that is a very good read. As I turned the pages I recognized Mull on the map and said to myself "Hey, this looks familiar! I even know by name someone who lives there and blogs about it!" Thought you might get a kick out that. Anyway -- Happy New Year to you and yours.

Hi Wilma. How cool is that?!
Thanks for keeping up with the blog and a Happy New Year to you and yours too.