Tuesday was a wet day and today wasn't any different. The view speaks for itself and the photos are top quality for the conditions;-) 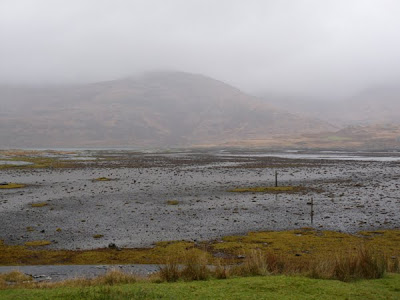 I had to give f-stop a lift home this morning so a bit of birding along the way had to be done. A flock of Greylags at the head of Loch na Keal was holding a couple of Pink-feet so we had a quick look and found nothing - a good start! We did bump into a couple of Fallow Deer so I had to stop and get a photo as I don't see them that often. It's the first Fallow Deer stag that I seen so it was worth the effort. 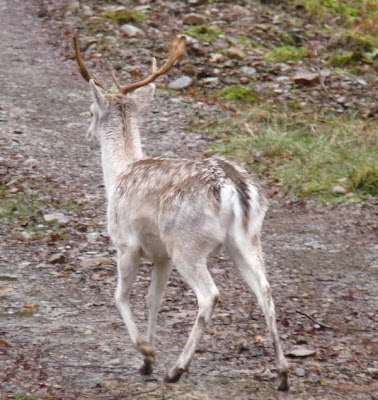 Next stop was the fish hatchery to scan the gulls. A cracking first winter Iceland Gull was one of the first birds I clapped eyes on - result.

A raft of Mallard, a few Goldeneye and few Teal were nice to see too. A WT Eagle put in a brief appearance as the rain got heavier and two Otters were wrestling on the shore.

A single Slavonian Grebe showed well but it was too far out and a bit active for photos. We stopped to look for the Barnacle Geese at the mouth of the loch but couldn't see any sign of them. The stop was made worthwhile by another WT Eagle hanging in the wind and probably the reason the geese were hiding! It was a fair stretch before we caught up with anything else of note but you can't pass up the opportunity. Two Otters just offshore, fishing in the shallows. It was only a matter of time before they would haul out for one reason or another. A fish was caught and brought ashore out of sight for us but as soon as it was eaten they appeared together.

Another Otter was a couple of hundred yards away from these two with a Common Seal nosing around in the same area while a bunch of Herons kept an eye on things. It's a busy old place at times! We headed back to the shop for a well earned cuppa. While slurping tea and chatting I spotted a suspiciously large lump across the loch. It wasn't the eagle that I expected but a Common Buzzard tearing away at a deer carcass - nice! 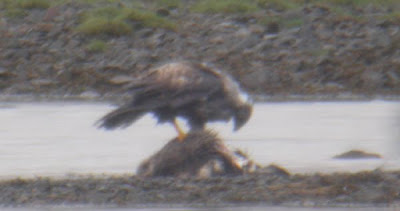 I'll keep an eye on that as I'm sure it will attract one of the big boys in at some point. I've just had a quick look and there isn't even a gull on it! The last leg of the journey to do and the heavens opened again. We spotted a WT Eagle sitting out on the reef but I wasn't stopping too long in the rain. It was a bit brighter on the way back so here it is. 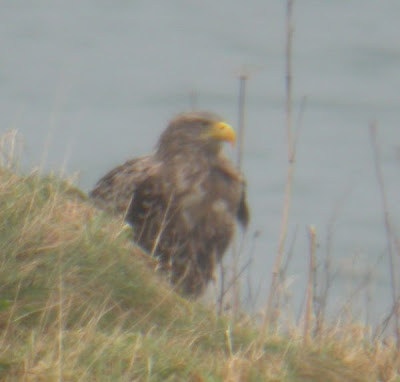 No geese but a cracking run out! This may be the last post for a week as we are heading down to Newcastle but if I can post from down there I will.
Posted by Bryan Rains at 13:38

f stop says thanks a lot for the lift

Enjoy Newcastle - hope that the weather improves a bit. At least we are getting that bit nearer to the shortest day and a new year! As always - regardless of the weather it always looks so much nicer on Mull than in does down here....