Thursday morning I had a slow drive around the loch on the quiet roads. I, eventually, caught up with a WT Eagle all be it a distant one. I was scanning the loch for divers and just happened to look behind to see a large shape appear in the sky. As I said before, it was distant and looked like it would disappear from sight but I made the effort to get the scope out. The bird started to circle, gaining height, I trained the scope on the bird to see if it was an adult or juv. One of this years youngsters was the conclusion - no wing tags, all dark bird with no white in the tail at the distance I was looking. I don't rely on the wing tags for aging the youngsters but it's handy when you do see them;-) That was my day made and I could have went home happy. I tootled along the loch seeing not a lot but I did have my eye on a couple of Great Northern Divers I'd seen in the distance. As it happens there was nothing between the WT and the divers so it was nice to get them close to shore. 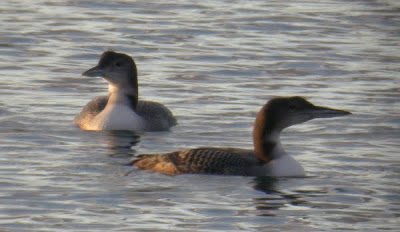 Two juv birds keeping close company and looking good as the sun catches them. Just look at the huge, sword like bill and the bump on the head and the scaly back marks them out as juvenile birds. Next on the list was one of those moments you treasure. I picked up an Otter in the distance and kept the binoculars trained on the area just waiting for it to surface. It was down for a wee while and it exploded into view, water spraying everywhere and you could see the small puff of steam from the mouth and a bigger spray of water off the whiskers. The sun made the water droplets glisten as the Otter held it's head high for a moment before diving again. The best thing of all was I could hear it too despite the distance! Classic moment. I moved around for a closer look to find it was the mum and cub. I struggled to get a shot of both of them together and then the battery ran out - no complaints from me though!

Today I had half a day to play with. The weather was calm, cold and overcast - the threat of snow was in the air. I drove to the west end of the island and I probably could have used Buzzards as mileposts! Nothing was keen in getting up in the still conditions so the Buzzards were littering the fence posts and telegraph poles. My first proper stop was to check a freshwater loch and I was surprised to see 5 small Canada Geese on the far side. Out with the scope to get a few photos for posterity. I'm no expert on the races of Canada Goose and the photos aren't up to much so Lesser Canada Goose will have to do.

No sooner had I taken the photos and they were off into the distance. I headed off in search of the Greenland WF Geese and I was slightly disappointed to see there was only 28 birds with only one of these a juv. There were three juv birds when they first turned up so I wonder if the others were just out of sight somewhere. I had to get back home for 12 so I headed back along the way just enjoying the views. I stopped off at a couple of places to see the odd GN Diver and Common Seal but nothing too exciting until I was nearly home. I'd pulled over to check a large part of the loch and I could hear the gulls calling and also the GN Divers were calling to each other - there must be something causing the disturbance. I picked a group of six GN Divers that were making the racket just before I saw the WT Eagle dropping out of the sky to land on a small island of rock. Best go for a closer look, eh? As I arrived at the best viewpoint a Raven was telling everyone what was going on. 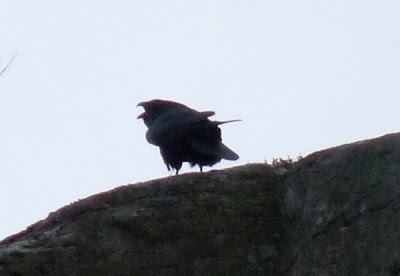 The light was fading as the snow started to fall but I managed to get a couple of snaps of this wing tagged WT Eagle. 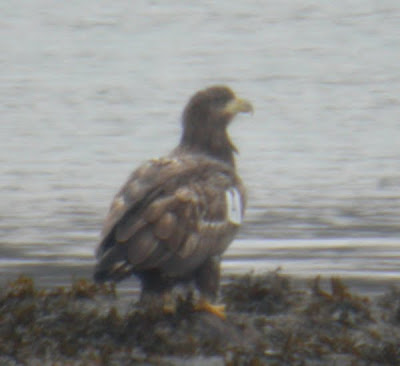 This is a bird from the island that was tagged in 2007. You can see the bill is almost fully yellow and if it turned to face the camera the front of the bird is white spotted down the chest. I had just enough time to get a shot of the first decent snow shower approaching....

...and another shot of the end result about and hour later. 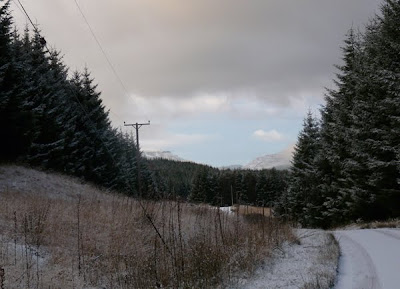 Just as I started this blog the top of Ben More cleared and the sun was dropping so I thought I would leave you with that view - stunning! 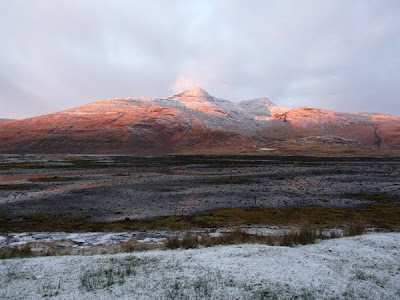 Great wildlife photos (no surprise!). But the shots of the oncoming snow and the snow dusted landscape are really lovely. I particularly like the last shot with the sunlight catching the hilltops.

Hi Bryan - hope that all is well. I echo the comments previously made - 'stunning'....
K

Wilma - it's nice to try to catch those moments but the photos never do the justice.

Thanks to all for the comments over the last year.