I want it all.

Tuesday was a flat calm day with superb visibility - classic conditions for rain the following day. I had to go out in the morning so I packed the camera, bins and scope in the car before heading off. Less than five minutes later I was out of the car trying to get a view of a couple of Otters but the angle of view through the trees was not so good. A flock of 20ish Whooper Swans were on a loch as I drove past and once again too distant for the camera. A bit of success at my next stop as 2 male Wheatear were blasting song at each other. Stunning birds - I'm sure there will be a few more photos like this before the year is out! 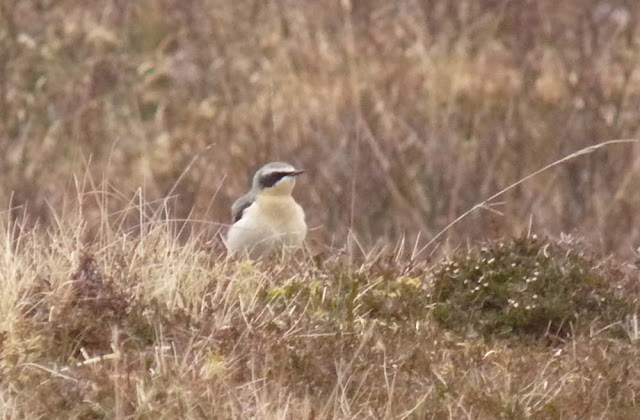 Another bird vying for the same bit of territory as the Wheatears was this Skylark. 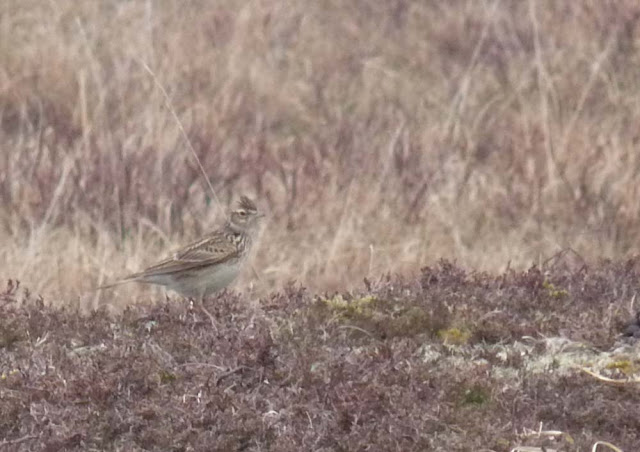 Nothing of any great interest on the journey home but I did come across the two Otters again. I spent about 15 minutes just watching them before they swam past me - nice.

Wednesday I was out on tour and as I mentioned earlier the weather had turned - wind, rain, cold etc. Not the best conditions you may think - read on...With no real targets for the day we set out to make the most of the poor conditions so our first stop was hopefully going to set the pace for the day. We bagged a hat full of stuff - Mountain Hare, Shelduck , Snipe, Wheatear, Meadow Pipit, Turnstone, Ringed Plover, Redshank, Lapwing and a male Hen Harrier as we left the area! 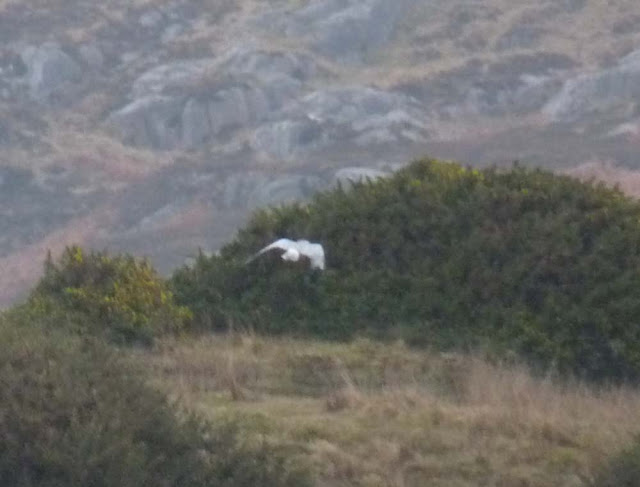 Not the best of photos but you can see it's a grey and black fuzzy thing with a white rump;-) We took in the flock of Whooper Swan and four Tufted Duck before moving on. The weather was almost threatening to clear a bit but the showers kept coming. Our next stop was the beach - it was a bit breezy but we still bagged a Common Seal, Kittiwake, 3 species of gull, Oystercatchers and a couple of Wheatear. A Redshank posed nicely for the camera too. 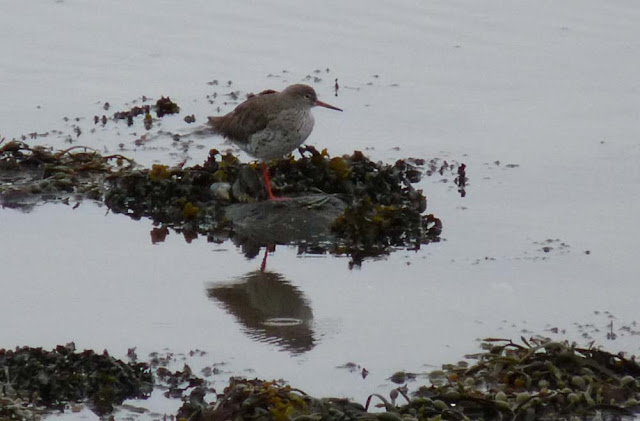 It was cracking on for midday and we still hadn't seen a Buzzard or any bird of prey for that matter but we kept plugging away. A couple of Sand Martins were a good find as was the singing Yellowhammer that eventually perched up on the wires so we could have a look. A Red-throated Diver was found close to shore with a Great Northern Diver just a bit further out, Curlew were seen just about every time we stopped, nice views of RB Mergansers, a flock of Redwing - we were certainly racking them up. Our first raptor of the day was a brief view of a Kestrel and five minutes later we had a brief view of a Buzzard - they weren't making it easy. The rain stopped briefly as we found a sheltered spot on the loch side for lunch and, hopefully, a bit of Otter spotting. The lunch was nice, no Otters and then it started lashing down - just what we needed! A quick stop outside the shop kick started the afternoon with a lovely rainbow and then a bit of a panic amongst the waders and gulls as a small raptors flew in front of us and then landed on the rocks - male Sparrowhawk was the initial thought but it was better than that. A cracking male Merlin with a Meadow Pipit for lunch - stunning views through the scope of the bird plucking it's prey and we forgot about the rain. 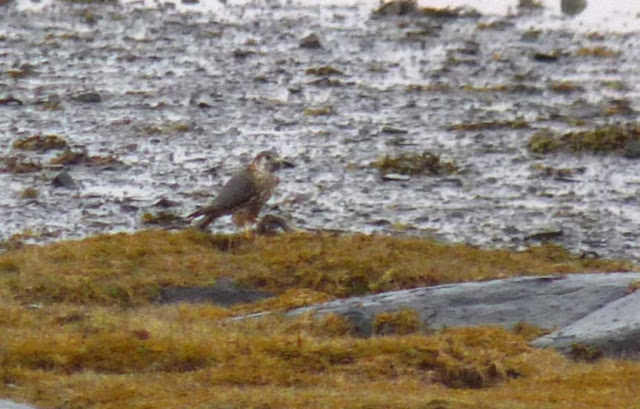 The Merlin certainly kept the spirits high as we drove to our next stop that produced an Otter pretty quickly. We watched the Otter fishing for a wee while but after half an hour or so we pressed on. A couple of Buzzards showed well along the way before we got a shout for a large bird flying over us. We jumped out and managed a brief view of the White-tailed Eagle before it disappeared into the cloud that was hanging over the forestry. It wasn't looking good for our chances of seeing either of the eagles but you have to try. The WT Eagle nest site was shrouded in mist so nothing from that and it was lashing rain and low cloud at a Golden eagle site with the only consolation being a Dipper - better than nothing though. As we headed back to the WTE nest the sky seemed to be brightening and thankfully the cloud had lifted from the eagles home. Both birds were on the nest and showing well. We headed towards another site for Golden Eagle as the weather started to clear but a large raptor clearing the ridge being chased by a Buzzard had to be checked out first. It was a young WT Eagle - fantastic! Better still we got it over head too! It was certainly all coming together now but with the weather clearing nicely and Golden Eagle still to get we wanted it all. We settled in with a cup of tea, a couple of Red Deer stags for company, and waited. One Golden Eagle appeared from nowhere on the ridge before taking flight and heading towards us and then it was joined by a second bird. They gave us a stunning display circling round before pulling the wings in and dropping the legs as they plummeted down in front of the ridge to give superb views before heading off - what a way to finish the day!!
A quick video taken this morning, Thursday, to show how much rain has fell...
Posted by Bryan Rains at 17:56

Hi Bryan another great day against the odds.When we have been to Mull have had many long sightings of W T E but only short ones of Goldies which is the norm as I understand it so your long views of Goldie really good or perhaps if my thoughts are wrong you will say.Funny tonight word verification not far off Croggan.