No sooner am I back on the blogging front and I'm going to disappear again! I'll try to get some bits and pieces in but decorating is taking all my time over the next few days. On my way back to base on Tuesday evening, in the rain, I took this snap of the waterfalls on Burg. Not much water going down the cliff as the wind blew it all back over the top! 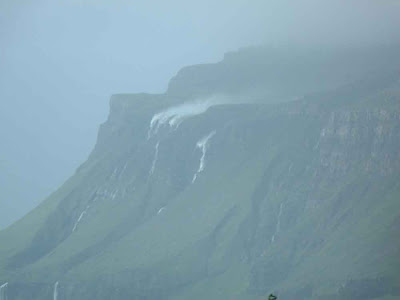 Monday was a day that started with showers but it cleared up soon enough. A cracking view of a male Hen Harrier was our first sighting of the day closely followed by this Mountain Hare. 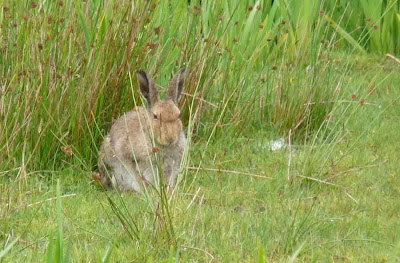 As the hare was taking shelter from the blustery Westerly wind we didn't bother getting out of the motor so as not to disturb it. Our next stop produced good views of a male Whinchat, a Common Buzzard perched on a telegraph pole and some superb views of Gannet. The weather was improving all the time so it was no surprise when we picked up a juv WT Eagle briefly clearing a ridge. We waited patiently for it to reappear but it soon became apparent why it didn't as a Golden Eagle put in an appearance. The bird landed just out of sight so we moved further down the road and managed glimpses of it's head as it looked around. A juv Golden Eagle was next to appear and this prompted the first Goldie to get into the air and do some rollercoaster display - superb!! The roadworks continue so after checking out the Adder we moved quickly on to clear the potential delay area. Just after getting through the roadworks we spotted a mass of birds with about 15 Oystercatcher and 4 Shelduck amongst the panic. What was going on? A hunting WT Eagle right in front of us!! It was after the Eider ducks with youngsters but with no success it gained height and moved on with a couple of Herring Gull in pursuit. 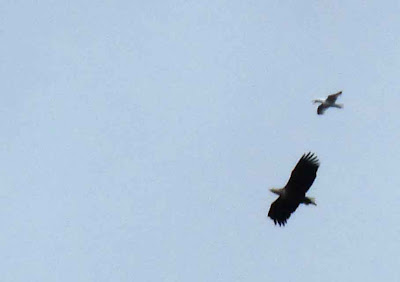 The wind was picking up again and there was the threat of rain again but we soon picked up an Otter that we watched for a good half hour. 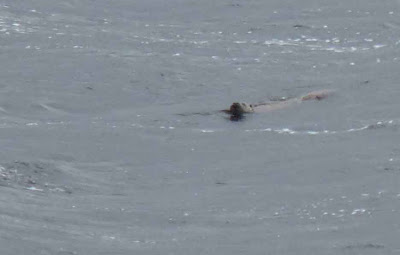 A Common Seal had hauled out on the rocks at the side of the road so a quick stop to get view and a photo. 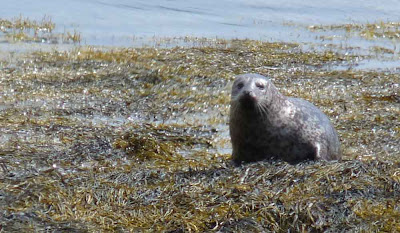 Another WT Eagle and another Golden Eagle were watched before we called it a day.
Tuesday started off in decent weather and our first stop was the WT Eagle nest site. The youngster was showing well with an adult bird perched above and another sitting in the trees nearby. We gave it a bit of time to see if we would get some flight views but it wasn't happening - you just can't rely on wildlife! We moved on to look for Otters and got cracking views as one hauled out on the shore to eat a fish. Another Otter was located a bit further down the road but after it performed well it started to head away from us so we moved on. The Golden Eagles provided some excellent views as the youngster was standing proud and exercising his wings and we had both adults perched side by side before they took to the air. I finally managed to get a photo of one of the Adders at lunchtime. 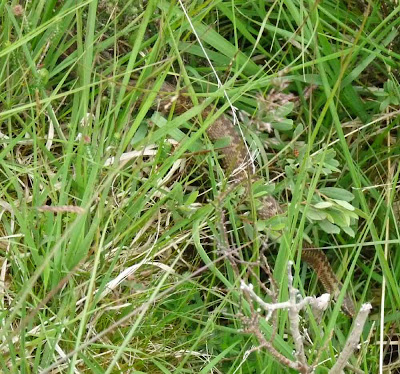 The weather started to close in while we were having lunch so we headed off to see what else could be gleaned from the day. Another two Otter were located just after lunch with one of them catching a large fish which it proceeded to bring ashore. The place it hauled out was not viewable for us so we headed off into the rain. The wind had started to pick up again so we turned our attentions to the sea and watched streams of Manx Shearwater flying by with plenty of Gannets fishing too. We hit a bit of traffic in the afternoon so hauled in to view the Sand Martins hawking around at low level and I managed to get a year tick too as a Swift came screaming through the middle of the Martins - excellent! The weather was, how shall I put it?...atmospheric on the way back but it still produced the bird of the day with a female Hen Harrier hunting very close to the road. It was close enough to see the colour of it's blazing yellow eye!! She stared straight at us before banking away to continue with the hunt.
That'll do for now and I'm away painting again. I'll try to get a photo of the new neighbours who all look a bit like this. 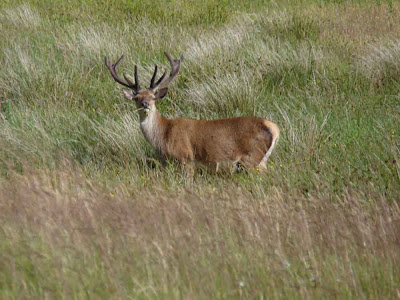 Amazing waterfall photo; that is some wind to blow the water back like that. Wind 1, mean Mr. Gravity 0!