Thursday was another pleasant day on Mull but with a stiff breeze - overcast in the morning but a sunny 19 degrees in the afternoon. We had an absolutely cracking start to the day with 40+ Golden Plover at close range that were put up by a Sparrowhawk. The Sprawk landed pretty close to us and as I readied the camera it took off and flew straight at us! Golden Plover really seemed to be on the move as we located 100 birds in another field and a few more birds that seemed to be just arriving. The Skylarks gave their usual performance of parading around about three feet away. Our next find was a bit of a surprise as we located a Red-throated Diver fishing in the shallows. 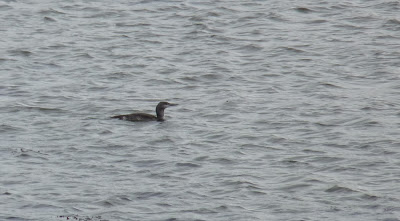 Plenty of Curlews on show today with most birds being the longer billed females. More Golden Plover were streaming in at our next location with at least seventy birds seen in three separate flocks. A lone male Goldeneye must have been fresh in too as it was fast asleep the whole time we were watching it. We had an alternative view of the Eider ducks today as they were all in flight when we arrived at the spot. No sign of anything disturbing them so they soon settled on the water again. There was very little sign of the bigger raptors with none of the big two and only a few Common Buzzard seen in the morning. As the afternoon cleared up we were hoping for better things and, boy, did we get it! We'd had the round up of waders - Turnstone, Dunlin, Ringed Plover etc plus RB Merg and Teal - before I picked up a large raptor clearing the ridge. The bird was fairly distant but once in the scope you could see the golden head. It wasn't moving in any direction except upwards and the usual Golden Eagle action of no flapping as the bird rode the wind until it disappeared into the cloud. We moved on try to locate Otters while keeping a sharp eye on the ridges. A few Raven and Buzzard sightings later we saw movement in the water. There was traffic coming the other way so we had to keep moving and as we got out of the motor to look back the beast surfaced beside us - a Common Seal. As we got back in the motor I looked further up the loch and said 'We'll have to get out again. There's a furry lump on the rock ahead!' Once we'd had a look we went for a closer look. Mum and two cubs having a snooze in the sunshine. 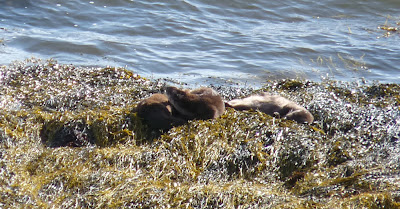 The tide was pushing in fast and it wasn't too long before they left the rock.

They were straight into fishing mode and the catch rate was pretty impressive. A real delight to watch these three at work and we'd had good views so it was back to the motor...but wait...they're heading for shore again. Mum had a fish and the cubs followed close behind. 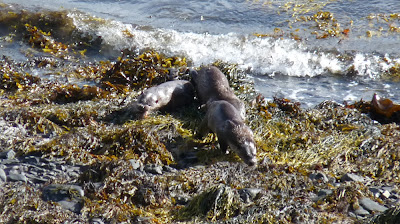 With no sign of anything happening we found a sheltered spot to have a cuppa and just scan around. A Golden Eagle appeared out of nowhere and started to display, bombing up and down, until it was joined by another bird. They both put on an impressive display before dropping behind the trees and immediately reappearing with a young bird. One of the adults and the young bird headed straight for us... 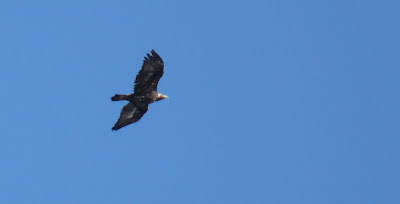 ...and had a bit of a dog fight!! As you can see the lower bird has turned upside down to defend itself. 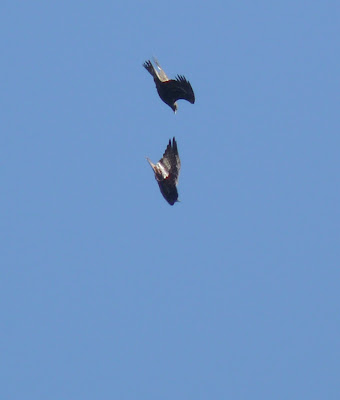 Absolutely cracking stuff! We headed back along the way and located another Otter but it gave us the slip momentarily. A Rock Pipit kept us amused for a wee while until the Otter was refound. 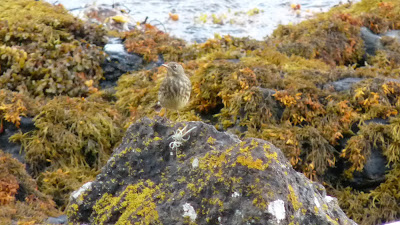 It was looking a bit bleak on the WT Eagle front with little action in the sky but we still had a few places to check. While scanning the ridges we picked up another Sparrowhawk but nothing bigger. I had a feeling we'd catch up with with the WT Eagles before too long and sure enough we connected with two birds on an offshore islet. Just to round things off nicely we bagged a couple of Mountain Hare at the end of the day too- 'Chust sublime' as Para Handy would say!
I've tried and tried to get some video footage uploaded but it won't work so I'll not be trying that again for a while. Also the ringing reports don't seem to be coming through to me so I'll not bother reporting any more of those either. Apparently the Brent Goose that featured in the last post was ringed in Iceland in May 2007, breeds in Canada and has had a trip to Normandy in the past. I can't give you any more info because it hasn't been sent to me.
Posted by Bryan Rains at 14:22

Your day sounds perfect, lots of action, lots of variety, good weather. I love the shot of the mom otter with 2 cubs snoozing on the rocks.

Hi Bryan,What kit do you use to take the images of the Eagles in flight, Otters etc? Are they all digiscpoed?? I'm just curious as to what kit I need to buy for my next visit to Mull. Keep up the great work with the Blog and hopefully I'll see you for another Beer next year....

You're so lucky to be able to say "Plenty of Curlews on show today" Bryan. The migrants are supposed to be turning up now in NZ. So *cross my fingers* this weekend I'll get to see some.

Paul - Coolpix 4500 for digiscoping but there are much better cameras out there now. FZ28 for anything else.

Glen - Good luck with the Curlews.

Thanks for the comments and keeping up with my ramblings.