Doesn't time fly when you're enjoying yourself - August is coming to a close and September will be upon us. The migration will be in full swing even though the rest of the country is pulling in rares left right and centre already what will September bring? I'll be keeping my eyes open and reading all the exciting news on everyone's blog whereas I will keep you amused with tales of the usual fare and pray for a miracle.
Bank holiday (what's one of those?) Monday was a return to good weather after rain on Saturday and a cool, blustery Sunday.  With no real agenda from the guests we went in search of revelations from the wilderness. It was all out there to be counted and with some future adults on board it was essential to hit the right level and pace the day - it's easy to do that with wildlife innit? I'd already been quizzed on the black and white bird, the possible cardboard cut out/statue and the bird sitting on the post. We'd picked up the likes of Grey Heron, Cormorant, Shag, Greylag Goose and Herring Gull before we picked up an Otter. We watched him in silence as he looked at us before returning to the essential practice of survival. We covered all aspects of the Otters life as he drifted, unconcerned, away from us. It's sometimes a surprise what captures peoples interest on a day so when we approached the WT Eagle site it didn't surprise me that there was a great deal of interest in the silage baling that was going on. I talked about the eagles and scanned the ridges as the baling was scrutinised in detail. My surprise came when I tried to move on but we needed to see one more bale get wrapped first! We moved on in hope of picking up one of the three absent birds. A few Red deer and a stunning view later we were looking at a cloud of raven taking to the sky but not looking too concerned. They were heading in the same direction as us and as we approached someone coming in the opposite direction a cry went up for a large bird approaching. An adult WT Eagle was just above us as we exited the motor. 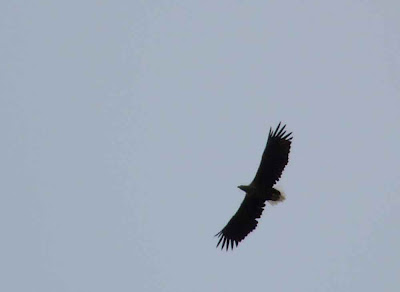 It was soon joined by another adult and finally the juvenile bird - it was the family of birds that we had been seeking. The adults landed on the ridge and gave the kids a chance to get some digiscoped shots with the pocket cameras. No sign of any Otters on the return journey but we got one of those black and white Oystercatcher birds and also a cut out Grey Heron... 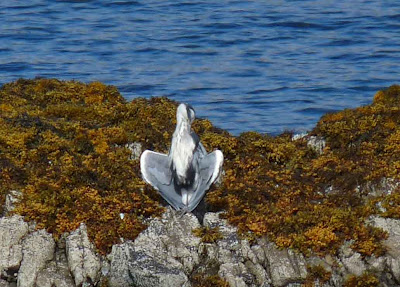 ...a herd of at least 20 stags was seen at lunchtime but not much else after a brief glimpse of a large bird disappearing behind the ridge. An adder was well photographed at the last minute but not by me... 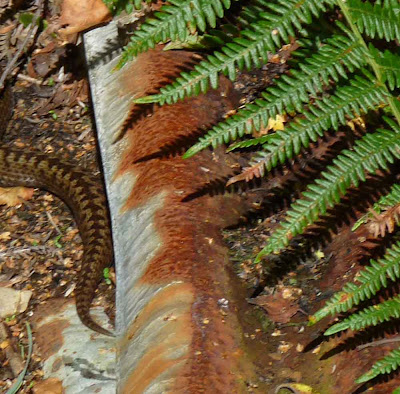 ...but the Common Hawker was a better shot. 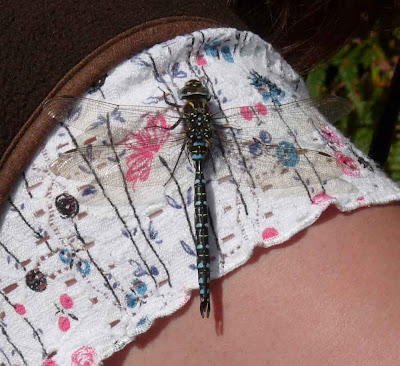 A consultation with the five wise pigs gave up a Golden Eagle sitting on a telegraph pole. I suggested closer views but the pigs almost got the better vote. As we headed towards the Goldie it took flight! An impressive sight but we wanted to be closer and luckily it landed again. We got as close as we dared and then wanted it to take flight. Did it do our bidding - hell no, well, it did when we couldn't see it! A good sighting of a Sparrowhawk was had while we willed the Goldie to fly but this was surpassed by a Buzzard feeding at the side of the track and posing beautifully. 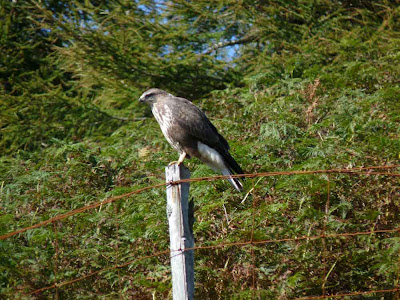 A flock of birds exploded from the trees just beyond the Buzzard and we watched in amazement as a Sparrowhawk attempted to catch a Chaffinch. We caught up with the Mountain Hare with ease and settled in for a cuppa while watching Skylarks, Linnets and the odd Pied Wagtail. 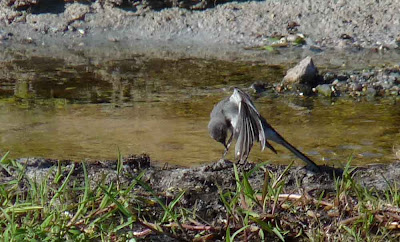 We all thought we'd had an excellent day but there was an unexpected bonus on the way back as we spotted two Golden Eagle at the side of the road. I managed one shot with the digiscoping... 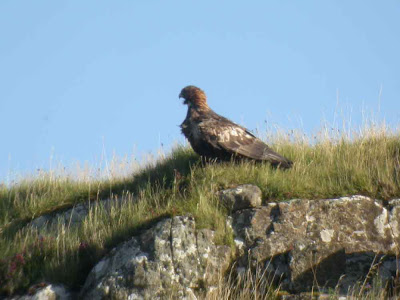 ...before they started shuffling about. 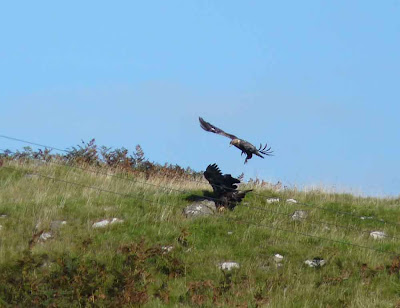 The views of the birds in flight around us were awesome. 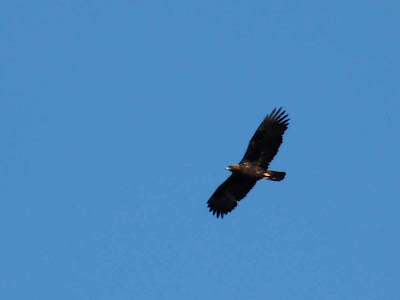 As the birds drifted off a Buzzard and a Raven attempted to chase the big birds off. The Buzzard was doing some spectacular dives on the eagle but there was no way the eagle was going to budge.
Posted by Bryan Rains at 09:26