Friday was a real day of two halves. The morning was shrouded in cloud but the sun broke through by lunchtime. Cracking views of the female WT Eagle in flight started us off in style and then a fruitless Otter hunt. We were busy looking for a few waders when it was noted that there were a bunch of people staring intently, through optics, at the loch. A quick turn around and a race back round the loch and we had two Otters cavorting in front of us - a lucky break! The Common Seals have pups at the moment and it's nice to see the youngsters suckling and swimming around with the parents. You can hear them warning each other away from their young - it sounds like a full scale battle at times. The Ravens and GBB Gulls are hanging around for any tasty morsels left over from the birthing adults - it's a bit grisly but interesting to watch. The sun broke through to brighten everything up and the best sight of the day turned out to be this Golden-ringed Dragonfly. We watched this miniature helicopter catch a bee then it landed right in front of us to devour it. 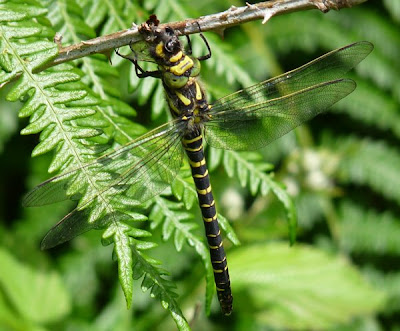 A Mistle Thrush decided that it looked really smart in the sunshine and that we should photograph it. They normally see you coming and give you the 'bum shot' but this was worth the wait. 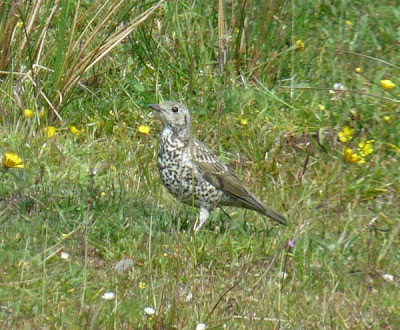 While watching a cracking male Stonechat a male Hen Harrier gave a superb performance and even came back for seconds. The only thing that puzzled me was it was flying upside down;-) 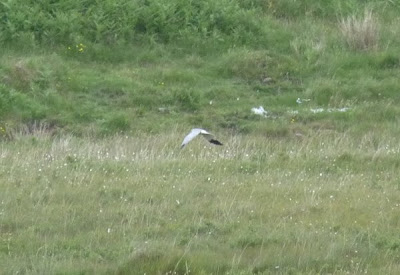 Saturday was written off due to F1 qualifying and a need to catch up with paperwork. I did see the dodgy Greenshank again and tried photos but with the grotty weather and distance it was no better than the first efforts. The bird is looking better proportioned now and the bill is upturned.
Sunday was another day of drizzle but some fabulous sightings. Never be put off by poor weather conditions as sometimes brings out the best of things. We viewed the WT Eagle youngster flapping it's wings before locating the female bird sitting in a conifer. We drove to a better viewing position and had a look through the scope. They are stunning birds at any time but to get close enough to the 'bird with the sunlit eye' and see why they call it that is awesome - shame about the photo though. 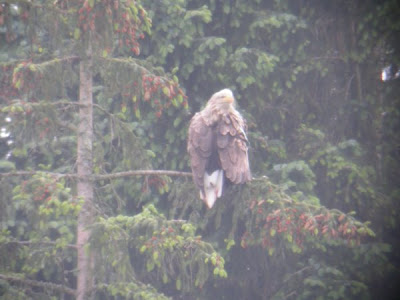 We located the mother and cub Otters and watched them feeding while keeping an eye on the approaching weather. As the weather hit we left - very wise! A very obliging Snipe was sitting patiently on a post waiting for us to arrive. This bird was sporting two legs so must be a different one to the one legged bird I saw at the start of the month;-) 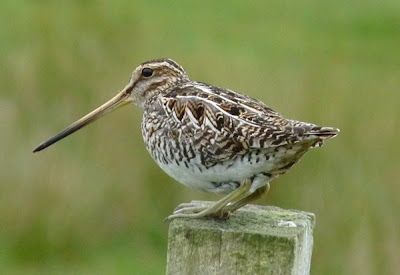 We rattled in the sightings through the day scoring with an Adder despite the rain, a flyover Crossbill, Cuckoo, Reed Bunting, Whinchat and plenty of Mountain Hare at the end of the day.
Monday was so good you were lucky to see any land across the loch and the rain was just awful. I was going to take some photos but they would have been just grey! It wasn't too cold a day so I didn't bother with a coat - Geordie nutter comes to mind! We started the day with a female Hen Harrier in the pouring rain and superb views of the WT Eagle perched up. Two Snipe on the roadside posts kept spirits up until we reached the seal colony where we located two adult WT Eagle - result!! I couldn't see any tags on the birds but I presume one of them was the male from across the loch. The male bird isn't being seen very regular round the nest and I wonder if the chick is a female and she's bigger than him! Anyhoo, both the Eagles took off, one after the other and disappeared into the mist. We stopped a bit further down the road to look at some Orchids but a shout went up for Otters - a mother and cub on the shore sharing a fish. The rain was lashing down but we didn't care as they give us a good 20 minutes of entertainment. None of that 'watching from the hide' for us! It lashed down all through lunch so we were already bedraggled before we set of for the Adders - pointless you say? - we found two! A male Hen Harrier ghosted out of the mist in front of us and disappeared almost as quickly just as we were getting back in the vehicle - just fantastic stuff for a rainy day. As you can understand we were in good spirits through the day so we decided to stop at a local shop and get some real spirits too - shopping on a wildlife tour? I've heard it all now but it wasn't my idea! We thought we'd finished the day with another female Hen Harrier but a dog Otter at close quarters, a cracking Stag in velvet and yet another dog Otter asleep on the seaweed were all bonuses on the way home. It was still raining too!
The weatherman had said it was going to clear gradually through Tuesday - boy, was I glad to look outside this morning to discover this........ 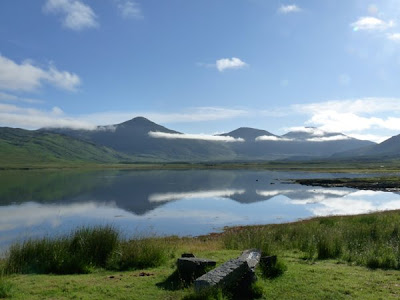 Now it's going to be too hot for things to move around. It was too hot for me and I didn't want to move around! I was alerted by the Common Gulls screaming that something was amiss, I grabbed the bins just in time to see a female Hen Harrier lift from the ground and escape the angry mob of gulls - that was before I set off! Timing was impeccable for the WT Eagle as it launched itself from a tree and flew off over the trees never to be seen again. A Golden Eagle gave us the run around by flying about then landing below the ridge. Whoever had the scope at the time could see the bird but it was like a magic eye puzzle to a blind man for everyone else! It's all good fun though. We located the dog Otter with a fish that must have been as long as he was - it took a good half hour for him to consume it and then he fell off the rock and sank. Well we didn't see where he went anyway. While we watched the big breakfast we had a male Hen Harrier over the ridge and another Golden Eagle - you don't know where to look! Another dragons tale from lunch....we located this female GR Dragonfly depositing eggs in the stream. It was fascinating to watch this beast laying her eggs in the water but she was kidnapped, before she was finished, by a passing male who just came out of nowhere and grabbed her, taking her off in to the bracken to show her how the birds and the bees thing works! 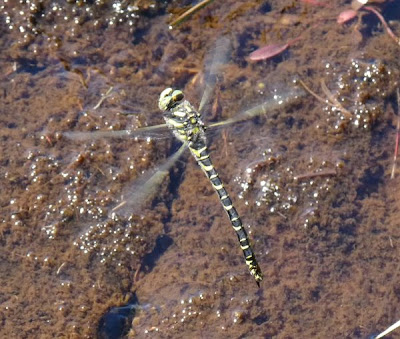 The foxgloves are stunning at the moment. It's amazing to see big swathes of these giants half way up a hillside looking like a big patch of heather. 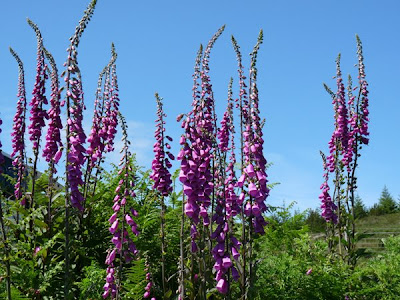 A soaring female Hen Harrier was a nice surprise. It cleared the ridge, showing well, but once it started to climb it really went up quick. Every time it swung into the wind it was a hot air balloon getting a blast from the burner - whoosh!
It was a bit of a quiet afternoon in some hellish heat so we headed for the beach to cool down a bit. We plugged away at the smaller stuff and managed to get something new every time we stopped - a Kestrel carrying prey looked like it was trying out some new landing gear in the shape of a Meadow Pipit. It was pulling at the head like a rip-cord but it wasn't working very well. Great views of a Cuckoo perched on the wires with the ever present Mipits by it's side. Another superb sight for the day was a Common Buzzard soaring around with a female Hen Harrier - what better comparison could you get? 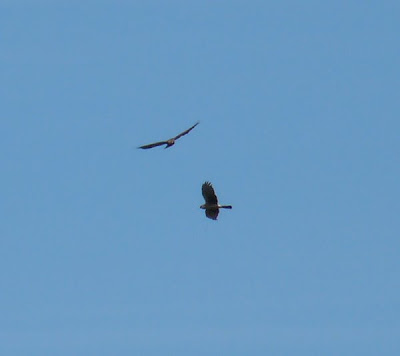 Here's one for the Postie...........just as we thought we'd finished or we'll just have one more look here, just in case ( you've heard it all before, I know) No more words, just pictures. 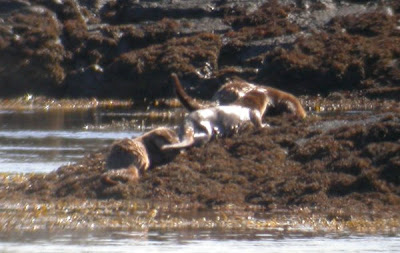 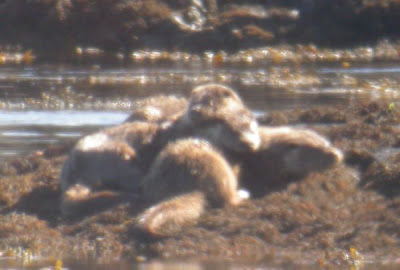 Mother with TWO cubs and yes, I shouldn't fiddle with the camera settings/zoom etc. in fact I should give up the cameras!
Posted by Bryan Rains at 19:25

Many thanks for your posts Brian. I returned from Mull in mid May having made my sixth trip to the island. Your blog is superb, and gives me the 'rush' I need to keep me going until I make my next trip in 2010.

It is like a torture really.... sitting in a lawfirm - it feels like a physical pain not being on the island. Why do a few photos and a blog going on about some birds have such a huge effect?
This is completely ridiculous....
K

As Kate says its torture not beeing on the island, but at leasy I can have my fix. Thanks you.