The dangers of sunbathing

The sunny weather is continuing and it's making for hard work. Persistence pays off though. Monday was an easy start with the WT Eagle and a couple of Otter in the bag. The first Otter was reasonably close but kept disappearing from view so we let it go. With the water flat calm it was easy to spot anything that moved - a Common Seal popped it's head up, RT Diver preening between feeds and then another Otter. We managed to approach this one and sat on the rocks as he worked his way past us. Here is a shot of him checking out who slammed the car door - we'd been there for 10 minutes already so it wasn't us! 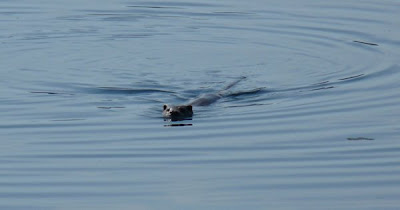 We bagged another couple of RT Diver at close quarters but the heat was tremendous and spoilt any chance of a photo - cracking views though. Superb views of Whinchat, Sedge Warbler, Cuckoo and Common Whitethroat were had but no sign of Golden Eagle yet and not much time left. A great view of a Cormorant fishing not too far from a Shag was a time for comparison of the two species. A last effort for Golden Eagle paid off as two birds were picked up - one in flight and the other perched up.
Tuesday was another scorcher. It was mentioned that we would be better off putting in the effort early on as the afternoon would likely be quiet so started in real style. WT Eagle feeding the youngster and another bird in flight, 2 Golden Eagle and a cracking male Common Crossbill were closely followed by a mother and cub Otter asleep in the sunshine. Another difficult one to photograph as the heat haze was playing havoc with the images. 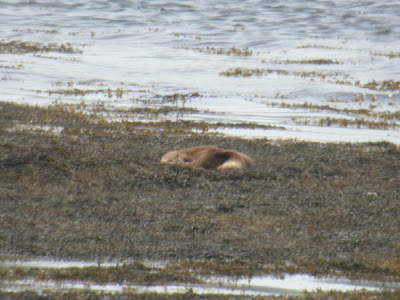 This Snipe was looking very relaxed perched on the fencepost. We actually drove past this bird and reversed back to it for the photo! Too hot to move. 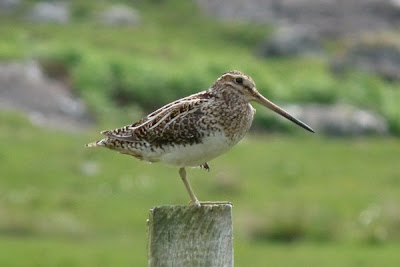 The sightings started to slow down as predicted but we had nice views of Grey Wagtail and managed to get Adder and Slow Worm together. A Yellowhammer was a nice find as we don't see them that often despite hitting the right spots. I picked up what looked like a Cuckoo with an attendant Meadow Pipit that turned out to be a Woodpigeon (my how we laughed - it must be sunstroke) but I was right about Mipit! This bird was an easier one to identify though. A nice male Stonechat posed on the electric fence for ages - stunner. 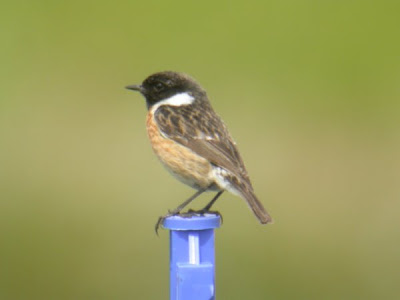 We finished off with a few Dunlin and Ringed Plover while watching the Mountain Hares, Redshank and Lapwing.
Yesterday the heatwave was raging on but the promise of it cooling down was a pleasant though that never really happened! Two Golden Eagles in the air together was a good start but not as good as the eight Crossbill that flew overhead - I'm biased! Otters were elusive yesterday despite seeing one on the way to pick folk up and then refinding it hiding on the back of a rock it managed to do the Houdini trick and disappeared. Another 2 Golden Eagle at lunchtime and a female Hen Harrier that showed very well was a surprise. We managed to locate 2 Adders but I didn't have my camera. That's a big help at the moment - have camera = no Adder, no camera = result! A male Hen Harrier quartering the hillside was a beautiful sight and all too soon he was gone.
Now for the bit you have been waiting for - the dangers of sunbathing........Skylarks are really fond of a dust bath or two in hot weather but don't do it on the edge of the road! This bird was dead keen - it was running back into the field when a car came past but when I drove away he tried for the suicide run in front of the motor! 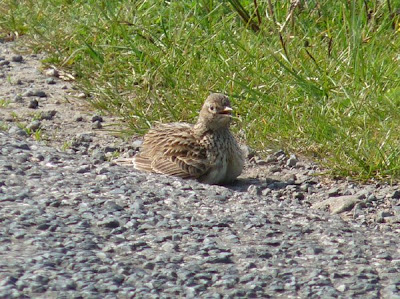 Heron are the best sunbathers in the world - I'd be arrested for using this pose! 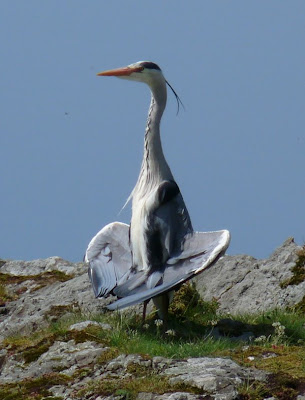 Dehydration is always a dangerous thing in hot weather. This guy fell asleep on the beach... 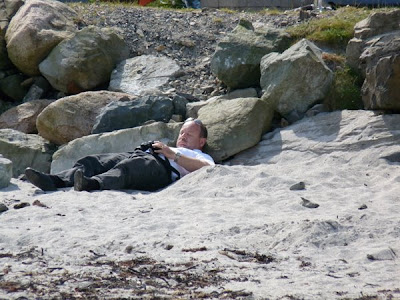 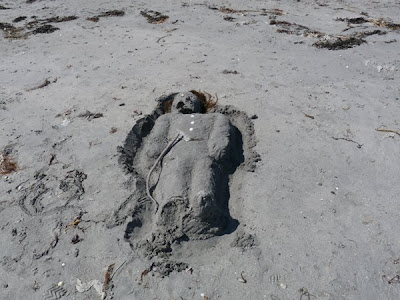 They'll find that in a few hundred years, I can see the headlines "Missing link found, The Mull Mummy"

You get some awesome birds. I love the snipe pictures and am envious you saw a Dunlin.