The guests were not that fussed about seeing Golden Eagle as they had seen a few already. It was just as well as they were missing in action on the day but we made up for it in other ways. WT Eagle and Otter were top of the 'must see' list. Five minutes into the tour and we were viewing two adult WT Eagle and watching six Swallows flying around. The weather wasn't the best so we stood in the rain for half an hour watching an Otter - no hardship there. Northern Wheatear, GN Diver and another cracking WT Eagle were seen before we had a close encounter with an Otter. It was fishing offshore so we took shelter in the trees and watched, the rain was coming down and it was wet under foot, and then the Otter was running past us. 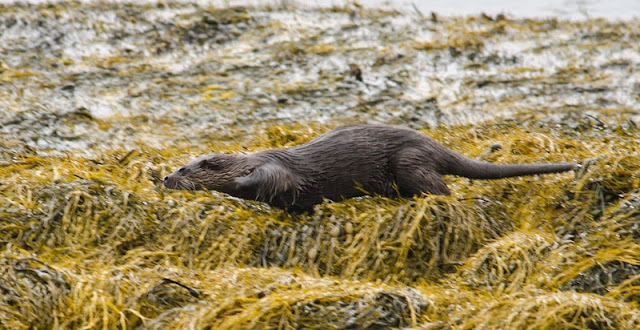 It headed back into the water so we moved to another position only to see it come ashore and head for us - superb!