It's not just the wildlife.

Wednesday was another hot day - don't believe what the weatherman says - it's about 20 degrees up here!! On the way to the shop, early morning, we bagged two Otter which was a nice start for me. After picking up the guests we started off well with an array of waders including this cracking Redshank. 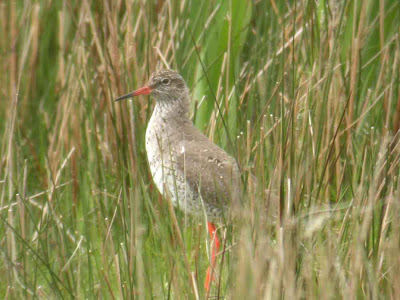 We carried on with the good sightings picking up a couple of Buzzard before locking on to a Stonechat and a male Whinchat not too far away. Lesser Redpoll were 'buzzing' about in decent numbers and it was good to get one perched up in the scope. A couple of Golden Eagle seen us through lunch quite nicely before we picked up another pair further on. Our search for Otters was fruitless through the day but you can't win them all. A Slow Worm that was in the middle of the road provided a bit of a distraction as I moved it on before it got squashed. I tried to photograph it after I'd moved it but it was off like a shot - not slow at all if you ask me so here is a photo of part of a Fast Worm!! 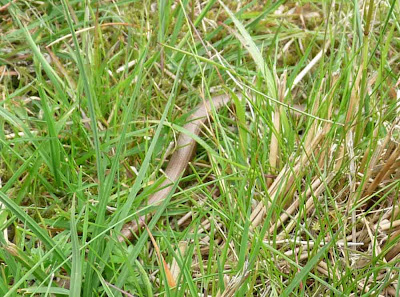 This Curlew was about 20 yards further along the road hustling it's youngster into the longer grass. The young one escape the attentions of the lens but the adult posed nicely. 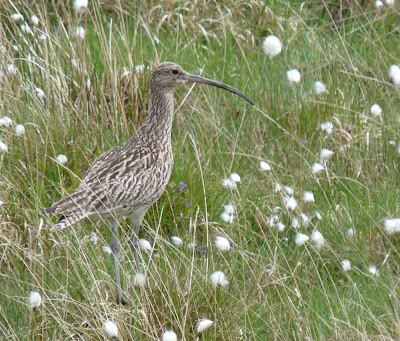 Thursday - scorchio!! While heading for the shop in the morning we bagged SIX Otters and I wondered if I'd get any more for the guests. Luckily we were starting from the shop and I could see two Otters from the door. We all enjoyed views of the mum and cub before we headed off. We had a good look at the Eider on the side of the loch before getting good views of a Willow Warbler singing at the side of the motor - it's really loud when it's that close too! Best sight of the day was this Grey Heron that caught an Eel. We watched as the Heron fought to subdue it's prey before trying to swallow it, only to have the Eel slide back out again. 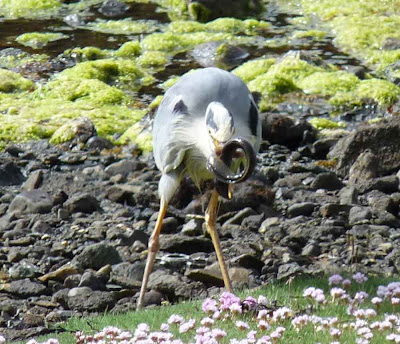 It took a few attempts but the Heron finally got his meal and we watched as he went of to a pool and cleaned his bill before preparing for another feast. Another Otter was seen just after this but this time we had good views of it on the shore. A visit to the WT Eagle nest was a bit of a novelty as just after we'd watched one of the adults flying around we trained the scopes on the nest and as we watched and waited someone said 'There's a man climbing on the nest' - 'What?'!! Sure enough the RSPB team had turned up to ring the chicks. A bit of a distraction was had when a large flying beast cleared the ridge but it wasn't a bird, it was a Typhoon Eurofighter. The ringing of the chicks was taking a bit of time so we headed off to view the Golden Eagles which performed well with the male heading off to hunt and the female gave a superb overhead display. 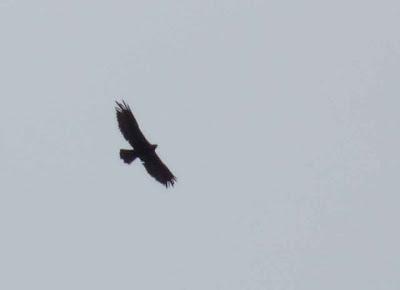 The temperature was staying around the 20 degrees mark so it was looking like a quiet afternoon. With Cuckoo and Whinchat added to the list we headed off to the beach. Along the way we found another Cuckoo that we got cracking views of... 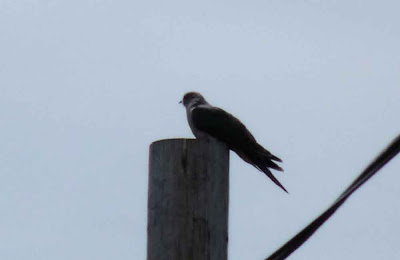 ...and better still a Common Lizard.

A very pleasant time was had on the beach with some guests going for a paddle in the sea while watching Dunlin, Sand Martins, Common Tern and Lesser Redpoll. We headed off to our last stop of the day where we found Mountain Hare in good numbers but the star of the show turned out to be a submarine! I had to set one of the scope up on the submarine with the other trained on a Mountain Hare - there was a queue for the submarine! Well, you don't get to see them every day. The Redshank, Lapwing and Ringed Plover were all showing well and, with very close views, they were much admired. Later in the evening while admiring yet another glorious sunset I noticed a strange cloud formation. If you look to the left of Ben More there is a mirror image of the hill in the clouds - bizarre! 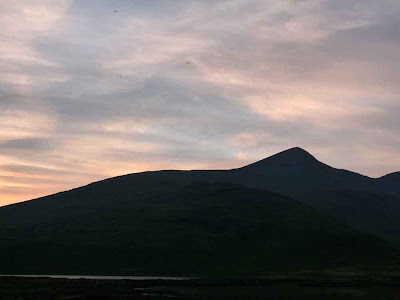 Great post Bryan. I was on the island in the middle of May and can't wait to get back. We drove down to Pennyghael from our base in Dervaig and saw WT's on the way and an otter on the shore of Loch Beg. Also saw your mini bus and we will be sure to book you up for a trip as soon as we can get back.
Phil

Thing - still not as weird as Coots though;-)

Phil - Thanks for taking the time to comment. I'll look forward to seeing you in the future.