Monday and Tuesday have been cracking days weatherwise with more sun than I can handle - bring on the rain! Monday started off with a bang as we located the first Basking Sharks that I have seen this year. They certainly look impressive as they scythe through the water but it's just a 'greet big, gummy fish' (they do have teeth but not big ones). They feed mainly on plankton which they filter from the water with gill rakers and grow up to thirty feet long! The beast that we saw were about 15 -20 feet long - very impressive though!

All the usual suspects featured through the day with Mountain Hare doing a runner, a distant Otter before we got a close one, an Adder that was seen by me and both types of eagle.
Tuesday was an almost identical day but the little extras were superb. It was also a day of numbers.....we located a Mountain Hare that decided it was shy and just showed it's backside. Five minutes later we were looking at six of these handsome beasts that were within 3 yards of the original sighting! Next on the number list were two Cuckoos, male and female, sitting together on the wires - superb. They flew off and disappeared but as we watched them go another bird started heading towards us. It was grey on top and pale underneath with barring just like the Cuckoo but the flight was all wrong. It got closer and closer before flying over head and off but we'd clinched the ID of the moustached Cuckoo imitator - Peregrine Falcon! I hoped to catch up with the Basking Sharks again but I wasn't expecting what we got. I picked up one Shark initially but as we scanned around the numbers grew - two together, another to the left, two more to the right and a huge one close in. We had NINE in total and an Otter at the same time! The large one was that big that the dorsal fin was bent over at the top - it must have been a thirty footer at least. We eventually moved on elated at the sighting that we'd had but there was more to come. An all too brief Golden Eagle and an Adder at lunchtime was quickly followed by another two Basking Shark! Better views of Golden Eagle and a look at the Orchids with Fragrant and Lesser Butterfly (below) being the best of the bunch. 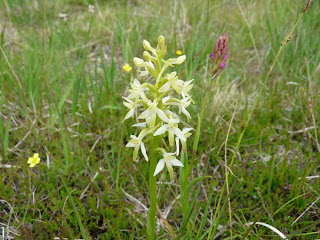 We passed by an Otter that had just moved closer to shore and out of sight so we headed off for the WT Eagle. We saw the adult female fly in and land by the nest and enjoyed good views of the bird preening before heading back for the Otter who showed superbly. 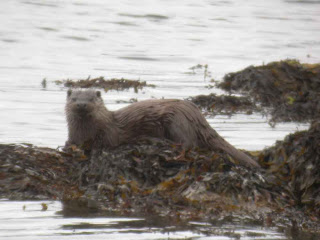 We also have an addition to the two 'pet' Grey Herons as they have produced at least one youngster this year. 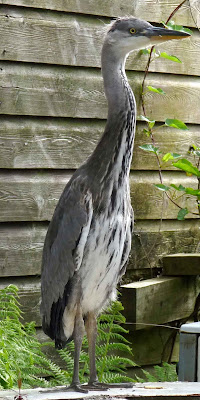 PS - I haven't forgot about Sunday. There will be a gruesome tale to follow!
Posted by Bryan Rains at 09:33