Monday and Tuesday were both sunny and hot days - very nice for people that like that kind of weather but rubbish for wildlife in the afternoons. Early doors on Monday I could hear a couple of Crossbill 'chipping' away and I watched them fly down to the shore. Bit of a mare to find them as they had dropped into a wee hole but I did manage to get one blurry shot of a red head poking up. 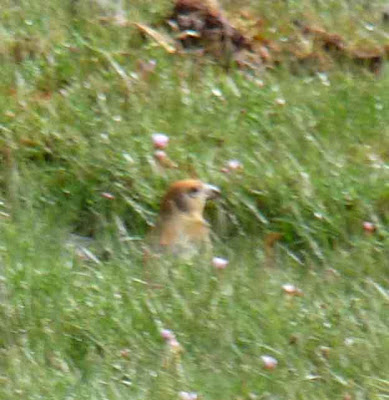 With the guests picked up we had the usual array of waders, Mountain Hare, Whinchat, Cuckoo etc before picking up a large bird being harassed. A WT Eagle was watched as it landed on the top of a hill in the distance. We drove as close as we could get and scoped the bird for a better view only to find another bird appearing as we set up - excellent stuff. The Golden Eagles did their stuff too. 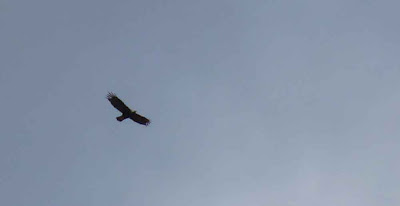 After watching the Eider ducks having a bath we located a dog Otter on the far shore having a good roll around on the seaweed. Closer views are always wanted and we hit lucky when I picked out a splash further up the loch. We made our way to the spot and found that the Otters were already being watched. We found a safe place to stop and got some excellent views of mother and cub.

While watching the Otter we got excellent views of a Cuckoo too. With WT Eagle in the bag not long after we headed for home but not before getting superb views of a Curlew. 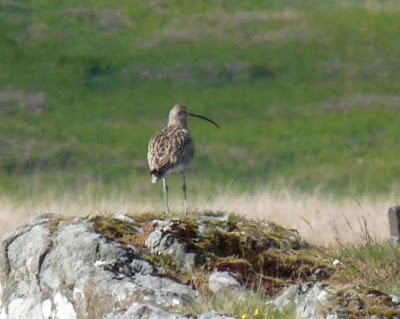 A really nice view of the red tones in the sky just after the sun went down to finish the day off in style. 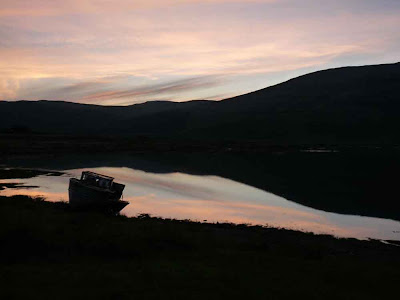 Tuesday was much the same affair but we had cracking views of Golden Plover and a late GN Diver. There are still a few RB Merganser about too but they seem to wander far and wide so it's always a pleasure to pick them up. The wildflowers are looking good too and it was nice to see this Red Campion amongst the Bracken and Bluebells. 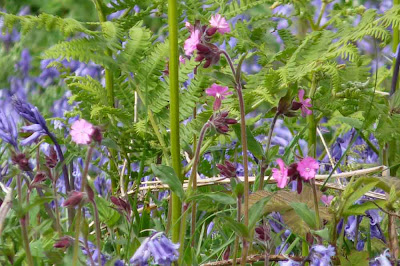 We struggled for Otters through the day and I think most people had given up hope of seeing any so there was great delight when I eventually found one that performed well. We drove away from that Otter and while driving along the road I glanced over my shoulder and spotted the tell tale wake of another Otter heading for shore - top marks for me!
Tuesday was a different day altogether with overnight rain and a bit of a dreich start the weather cleared from the West. Stunning views of Redshank and a Snipe were had in the morning before we picked up the likes of Stonechat, Common Tern, Gannet and an Otter. A Sedge Warbler was watched in song flight before it landed right next to the motor to give crippling views. I picked up a year tick too when a Short-eared Owl gave good views as it hunted the hillside. We had superb views of a fledgling Dipper and a flying Cuckoo before the sun came out properly and lit up this Red Deer perfectly. 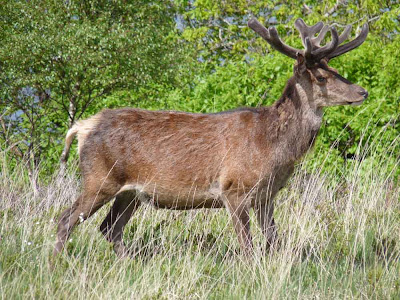 We'd already had views of GN Diver and it was nice to see a Red-throated Diver not long afterwards. We had to wait a while to get views of Golden Eagle but the youngster showed well before we got an adult in flight. We arrived at the WT Eagle site to find we couldn't get parked and the adult had just flown off. We kept going and returned a bit later on in time to see the adult bird returning and having a bit of a fly around - excellent. Our last sighting of the day was of a Cuckoo perched up on the wires. 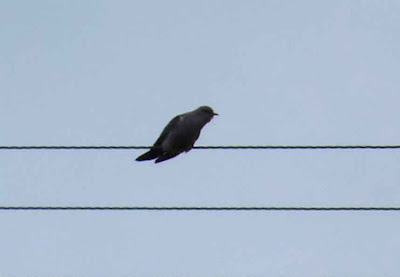 Hi Bryan,
Very good reports as usual,interesting the amount of cuckoo you have on Mull, this year I have only heard two at home, they are not in the numbers we usualy have this year. Take care, hope to see you both sometime this month for a flying couple of days.
Kind Regards
Malcolm & Norma (PKC)

Just got back to Leeds after a fab week on Mull. Wanted to say how much we enjoyed Monday. It really set the scene for the rest of the week. And you are right, we were just about giving up hope of Otter, but you really pulled it out of the bag. That second spot of yours was almost miraculous!! To anyone else reading this, Bryan's tour is the perfect introduction to the Ross of Mull. Thanks for a top day out.