Wednesday was another day out with guests and the weather wasn't too bad. We started off with a fruitless search for Hares but we did have some good flight views of three Common Snipe. Three Stonechat were nice to see perching on the high points and a couple of Reed Bunting keeping them company. The first big sighting of the day was an adult WT Eagle perched on the rocks in the middle of the loch. The waders were performing well with the Turnstones and Golden Plover being the highlights and a couple of Little Grebe doing their best not to be seen. Two WT Eagle perched together in a tree gave the guest a good size comparison between the male and female of this species and then a very distant WT Eagle on a cliff top didn't give much away at all as a silhouette! The run back to the starting point gave us the much needed Otters but they were across the loch and asleep. We gave them a bit of time and they eventually woke up and started feeding before heading closer to us. They ended up about 20 yards offshore from us and it was great to hear the splash of water as they surfaced or dived and also the crunching noises as the fish were eaten!

A couple of GN Diver and three RT Diver were welcome additions to the sightings for the day and it was a shame that a female Hen Harrier was seen just after dropping the guests off.
Thursday dawned pretty grotty with low cloud but this was due to lift through the day. 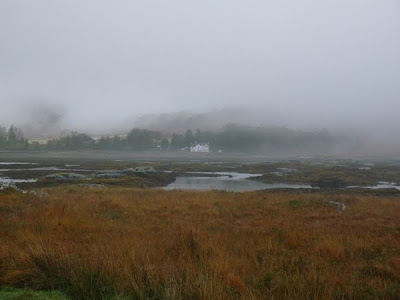 As you can see it was one of those days where you can't check the ridges but with no work on I wasn't that bothered. I did have a quick scan around when the cloud started to lift and it paid off immediately with a Golden Eagle just coming to land on the ridge in the sunshine. A brief glimpse of a WT Eagle disappearing over the ridge was a bonus but the sighting of the day was still to come. I was stood outside chatting and a gull calling in alarm had me looking to the skies and a good job too.... 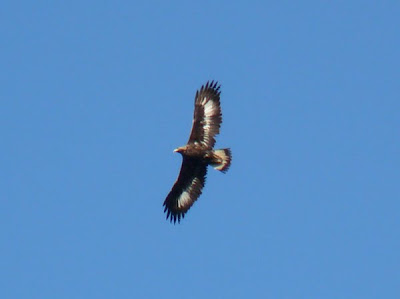 ...an imm Golden Eagle soaring overhead - cracking stuff!
Friday was an absolutely stunning day almost a return to Summer - clear skies and no wind. Out on the road with guests, I'd already informed them that it could be a tough day, we had a bit of a slow start. There wasn't a great deal happening at all with no birds in the sky at all. Even the Buzzards were all sitting tight. Approaching lunchtime we had nothing of any great note to speak of so a bit of sitting tight and searching the skyline was in order. It paid off as we had brief views of two Golden Eagle and then prolonged views of a different pair of the same species. We bagged a few of the water based birds in the shape of Guillemot, Shag, Eider, RT Diver, RB Merg to hold the interest. We caught up with a stunning GN Diver that was busy preening while we had lunch but there was no activity above the ridges and the best we could do was plenty of Red Deer on the hills. It was looking like a tough job for the Otters too but some extensive searching eventually winkled them out. We had to turn back to seek better views and we were rewarded with close views and plenty of photos for the guests posterity. Another two Golden Eagles perched on the ridge in the distance and very brief views of two WT Eagles finished the day off.
Saturday is not quite over yet but it's been another stunner. It started off with a decent frost this morning and I was on shop duty for a change. A brief saunter outside to check the ridges paid off with 3 Golden Eagle up in the air together, a WT Eagle in the same air space and it just happened to coincide with the arrival of some of the guests from yesterdays tour. They were certainly pleased to get some extra views of the eagles.
Posted by Bryan Rains at 17:05