Thursday I was back out on tour in pretty poor conditions. Quite often you are asked if it's worth going out in poor conditions...read on! We had an early start to get the best out of the daylight hours and what a good start we had. We took in the obligatory Cormorant, Shag, Grey Heron, RB Merganser and GN Diver before we spotted a monstrous shape on the rocks in the distance. It could only be a WT Eagle.

We got close enough to get stunning views and a tremendous digiscoped effort with the camera lens well and truly steamed up! Better luck next time eh? 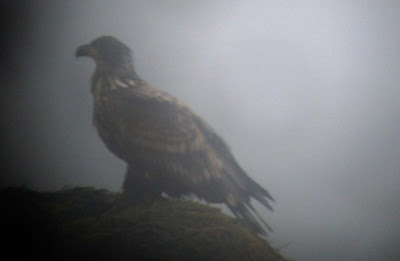 The rain was lashing down at this point and the three Otters that the eagle had been watching kept us out in the wet stuff for another 20 minutes. It looked like the weather was set in for a while so we peered out of the windows at the Common Gulls, Oystercatcher and Red Deer and the rain just stopped all of a sudden - excellent. We drove past the three Otters and picked up another two close to shore before moving on. The cloud base was still quite low but the wind was supposed to pick up which might improve our chances of getting Golden Eagle. We moved round the loch picking up a single male Goosander, 2 RB Merg, 4 Whooper Swan and a few Common Teal before we headed for lunch. A brief stop to look at the seals was worth the effort with one of them attempting to impersonate a wet rabbit. 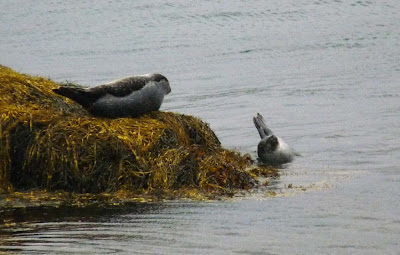 The wind had really picked so it was no surprise when we spotted two large birds in the sky ahead of us. We watched them wheel around to get an ID on them - WT Eagle again. We drove closer to get some brief but spectacular views. These two birds stuck around while we had lunch too so that was a bonus but, despite the fact that they were flying around a Goldie territory, there was no sign of their smaller cousin.

The rain was still threatening to start again so we thought it was wise to seek out a Golden Eagle while we could. Another territory, another attempt. Nothing in the sky at all﻿ and then it all happened at once - a Common Buzzard appeared with a Golden Eagle in the distance only for both of them to disappear. It happened again only this time we had two Golden Eagle in the distance - we had to get closer. We drove down to where we'd seen the birds flying to find nothing but a small herd of Red Deer. A bit of a wait in the chilly breeze and some frustratingly brief views and all of a sudden one of the birds was rushing in from behind us not 20 yards away - fantastic. We had both of the birds at close quarters so it had been worth the effort of tracking them down.

The dull conditions were not conducive to good photos but you can be assured that what we saw on the day was pretty amazing to say the least. We carried on with our search for new stuff and it just kept on getting better. A female Hen Harrier hunting in front of us was a cracking find and the photo was suitably useless as it was taken through the windscreen. We had the bird down to about ten yards at times but the camera wasn't having any of that!! 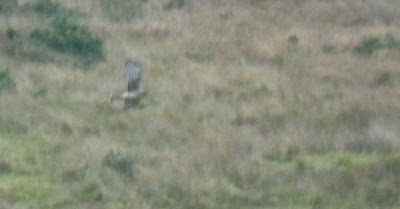 We'd picked up the Greenland White-fronted Geese which had increased to 20 but no sign of any juvenile birds but there didn't seem to be much else around. I had a hunch there might be a few extra things to add if we checked a bit harder though. As we drove down one of the tracks we came across this sight.

There were 80 Whooper Swan in this flooded area with plenty of young birds amongst them (you can see quite a few of the pale billed, greyer looking young birds in the photo). A bigger surprise was the 15 strong flock of Greenland White-fronted Goose that took flight as we arrived. You can see how dark these birds look compared to the larger, greyer winged, Greylag Goose in the bottom left of the flock.

A Mountain Hare gave itself up in the windy conditions and we'd bagged most of the specialities that you get up here but there was still more to come. Our return journey gave us another three Otters, more seals and literally seconds before finishing we picked up a Merlin. We watched the Merlin as it attempted to catch a small bird twisting and turning with amazing agility but all the effort was to no avail as the falcon gave up and perched on a fence post - fantastic!!!
Posted by Bryan Rains at 10:42

Just about the best day ever.photos good for such a bad day

Cheers mate - you can only get what the camera will allow on the day. There is an update to come!

It was such a great day Bryan and this brings it all back -thanks again! Morwenna