Luck of the draw.

Thursday was another cracking day with no birding done due to other commitments.
Friday was a continuation of the pleasant weather and a tour to do. We headed off in search of Otters getting good views of GN Diver along the way. It didn't take too long to locate a mum with two cubs that gave good views despite the badly back lit photo.

These three were joined by another Otter briefly but they soon went their separate ways.

A trip to the WT Eagle nest produced both adult birds plus a couple of Golden Eagle over the ridges before we headed off to view the Red Deer stags. It went a bit quiet after that with the highlight being another Otter that was busy fishing in the loch. Lunchtime was looking a bit quiet too after we'd viewed a single Adder basking in the sunshine. 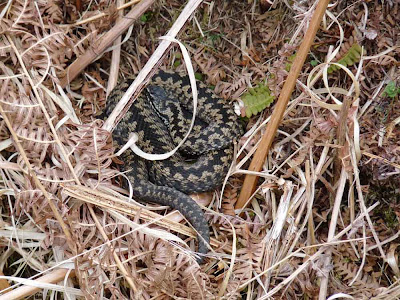 All of a sudden things started to come together again with the appearance of a couple of Kestrel, a brief view a female Hen Harrier and another Golden Eagle. As we headed off we caught sight of a male Hen Harrier that dropped out of sight and then we relocated this bird for cracking views. A cracking male Northern Wheatear was a good find but this bird had no intention of sitting still as it flew round like a maniac singing all the time. Sixty Whooper Swans coming in off the sea was a cracking sight too. Our last stop of the day gave us flight views of the WF Geese, another Wheatear that was as manic as the first one and a lone Mountain Hare.
Saturday was a different day altogether. The weather wasn't too bad in the morning but we knew we would get rain around lunchtime. The first sightings of the day were a group of 6 Rock Dove that were in full courting mode with the males chasing the females around. A flock of Herring Gulls were holding 3 Lesser Black-backed Gull as they all waited for the Sheep to be fed. While looking for the Mountain Hares we picked up 20 Barnacle Goose, 50 Golden Plover and the usual smattering of Skylark, Lapwing and Redshank. We dipped the Hares and the WF Geese. On the way to our next stop we located a WT Eagle sitting on a ridge while it watched the proceedings of a flock of sheep that were just starting to lamb. Cracking views of 2 Wheatear and a Great Northern Diver were pleasing as the rain started to fall. We sped off to try and locate Golden Eagle before the weather closed in properly. As we viewed one of the Common Seal colonies we picked up 3 Otters heading for shore. They clambered out onto the rocks and dried themselves off and disturbed the dog Otter that was sleeping in the same place. While watching the Otter antics I scanned the ridges behind us and there were 2 Golden Eagles circling around - where do you look first?! We moved on to lunch and we were lucky to find an Adder and also another Golden Eagle flying about. The rain was really coming down now but it didn't dampen our spirits. Greenshank, Ringed Plover, Teal and Shelduck all showed well before we located another Otter at close quarters. The female WT Eagle was sitting tight on the nest but we'd had a tip off that the male bird was showing better just up the road. 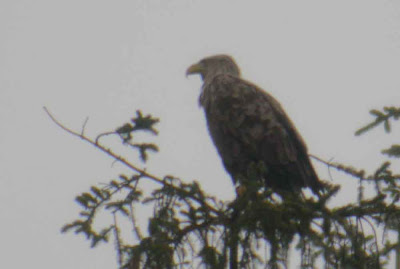 All in all a great day in poor conditions.
Sunday was a return to the good weather. We started the day with the WT Eagles and got a bonus as there was also a white tagged female bird in the area too. Not a great shot of the bird but I was wanting a few photos to stick on here!

The young bird had the close attention of the male but there was no sign of them actually doing anything. We headed off to leave them to it. At our next stop I finally got an opportunity to take some shots of a Wheatear - foolishly I'd changed the settings on the camera and didn't change them back. 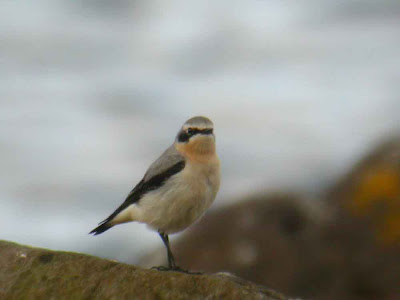 Five Red-throated Diver were a nice find in the loch behind the Wheatear. We drove back past the WTE nest to find the youngster had flown off but the adults were just in the process of changing over - result. A fruitless search for Otters gave us good views of GN Diver, 2 Goosander and a single Razorbill. Despite the good weather everything went quiet again. We thought that lunchtime might kick things off again but there was no sign of the Adder but it had shed it's skin and left that for us to look at! No sign of anything flying around so we checked for Dipper and failed but on checking the now just damp pond we found this... 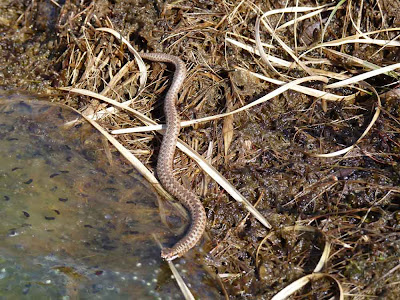 A yearling Adder that looked like it was taking water from the frog spawn.

We hit a real quiet spell after that with the only highlight being 3 Yellowhammers at the side of the road. We headed for the Mountain Hare site hoping that would liven things up a bit and we weren't disappointed. Two Hares were basking in the sunshine.. 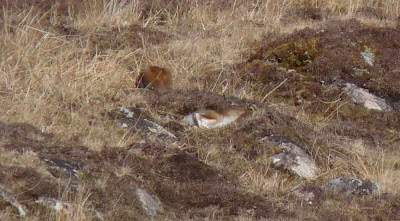 ...the Lapwing were looking splendid... 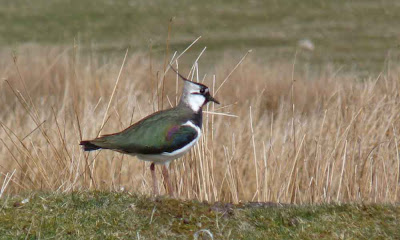 ...the Skylarks were singing in the air and on the ground... 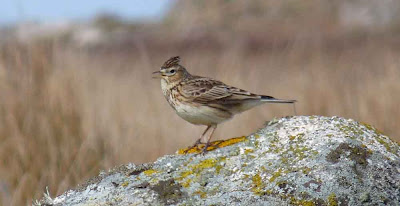 ...and the Redshanks were in full display. 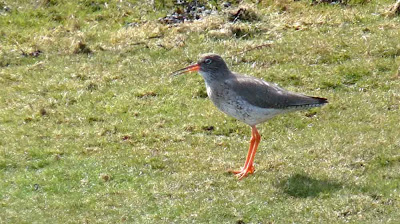 We were after Golden Eagle on the way back and after seeing very brief views of a couple of birds that disappeared behind the ridges it wasn't looking good. We picked up a WT Eagle in flight before finally getting prolonged views of a Golden Eagle. Just to top things off we managed to not see an Otter too!
Three different days looking for the same things and proving that, at times, it's just the luck of the draw.
Posted by Bryan Rains at 10:43

It is just the luck of the draw and it was a superb day out in wonderful countryside even if some of the birds decided not to fly! I loved it and will no doubt see you again in July.