Monday was a day of rain and not much happening. A flock of 12 Whooper Swan dropped in so I had a scan through them as they were hauled out on the shore to check for rings. Three of the birds were sporting rings and I managed to read one of them - the info has been sent off so, hopefully, I'll get a response. As the birds were quite distant I tried again to read the rings from the other side of the loch but the conditions were not in my favour. 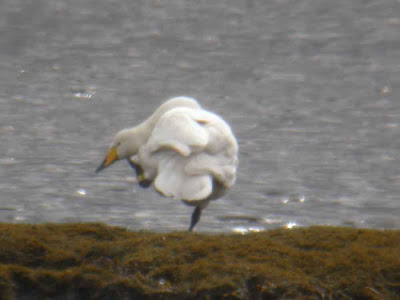 While I was watching the Whoopers I heard the Common Gulls calling in alarm. A quick scan in the right direction and I was watching a WT Eagle flying in my direction. I grabbed the camera and fired a few shots off.

The bird spotted me and wheeled around... 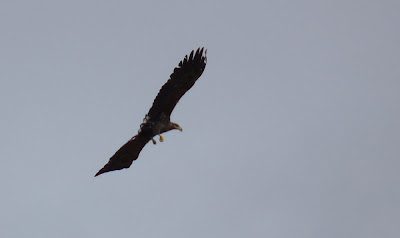 ...and headed off. This bird is a bit of a mystery at the moment. It has a tag but it doesn't look like one of either the West coast or East coast tags so it could be one of the Irish birds. Again, we'll see what comes back from that!
Tuesday was another day of rain and more sightings of WT Eagle. The Whooper Swans were still present but I knew they would head off before too long - they were trumpeting to each other and at 9am they took flight. A couple of hours later I was wandering around outside, while I was on the phone, and again the gulls put the alert out. A large bird was heading across the loch and looking like it was heading off....it turned around and started heading back. I made my apologies on the phone and grabbed the camera as the bird was flying past... 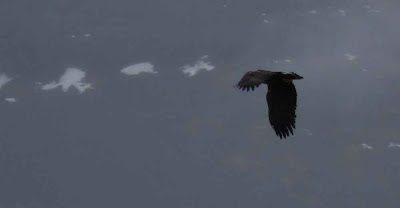 ....it then turned and dropped down onto the rocks. When the bird was settled I had a look through the scope to read the tag - White 3(a 2007 bird). I took a few photos but the conditions were pretty poor. I headed round the loch to see if I could improve things but it wasn't worth it. I had a quick look at the local WT Eagle nest where the female was sitting tight in the drizzle. On the journey back around a Buzzard stayed still long enough for this. 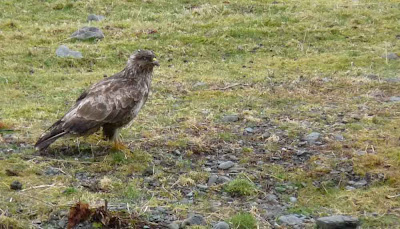 On getting back to White 3 I was surprised to find it had been joined by another bird. I made the attempt to get a half decent photo just to capture the moment.

The second bird was a year older than the first one with one tag tucked under it's wing but the other was visible - Yellow 1. Both of these birds are from the West coast mainland. White 3 is a male and Yellow 1 is a female - just look at the size difference!! 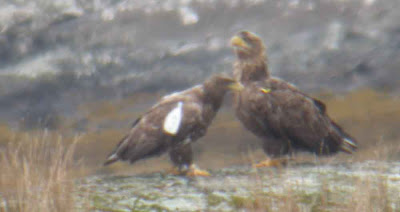 You,re not kidding or have you got me with another Otter type shot?

That is the real deal - he looks a bit of a runt though.