Friday started off a bit grubby with low cloud on the hills but you could see it was going to clear through the day. We started off, with the tide almost at high water, looking for the Otters. The dog Otter was asleep on the seaweed and the water was still rising so we waited for him to move off. It wasn't too long before he was on the move and showing very well. The WT Eagle chick is growing well and the adults now leave the bird for short periods but still have to feed it. This gives good opportunities to see the adults in flight. We didn't bother with the Golden Eagles in the morning as the cloud base was too low so we headed off. At the toilet stop I wandered back outside to find everyone watching an Eagle flying around - I could hear the gulls making a racket so I was prepared. Straight in with the camera and got this headless monstrosity! Another WT Eagle. 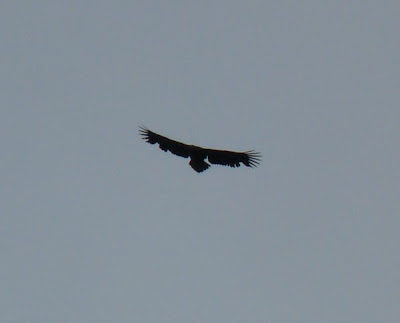 The Highland Cows were cooling off in the water so I grabbed a quick shot. 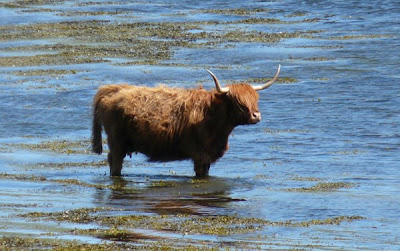 We managed to get a pair of Golden Eagle patrolling one of the ridges further down the Ross in breezy conditions. Boy, was it getting hot though. A nice female Hen Harrier was picked up just as we got back to the vehicle - cracking. Two Red-throated Diver were located on the sea at close quarter but just too distant for the camera to do justice to these Summer plumage birds. 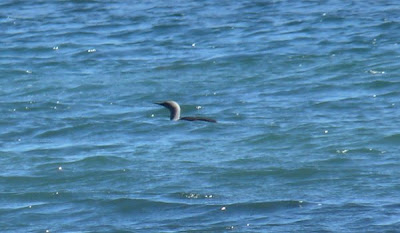 We had a couple of Mountain Hare romping across the machair to finish off another great day. 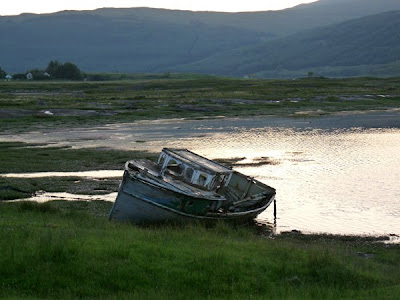 Another seriously hot day yesterday saw the tarmac melting on the roads! The good weather doesn't always produce the results you would like as the bigger birds keep a low profile and the smaller birds are being a bit more secretive as they settle down to nesting. We did very well in the morning picking up plenty of the smaller stuff - Greenfinch, Whinchat, Cuckoo, Northern Wheatear to name a few but none of the biggies. We did get great views of an Adder curled up in the grass and a male Grey Wagtail collecting food for a hungry brood. Shifting our attention to the Otters we didn't waste any time in locating the mother and cub. While we were watching these two fishing the gulls and geese got up in fright as an adult WT Eagle performed a fly by. We bagged a female Hen Harrier close to the WT Eagle nest which was a nice surprise but the Golden Eagles were playing hard to get. We had to be satisfied with the distant view of 2 birds soaring high over the ridges. It was a surprise to find we had 53 species on the list at the end of the day but we did work hard at digging them out.
Today, Sunday is a day of rest. After a cracking meal at the Ninth Wave restaurant last night and an overnight stay at Seaview in Fionnphort we had a wander round with the camera. This Song Thrush was using the lobster pots as a singing post. 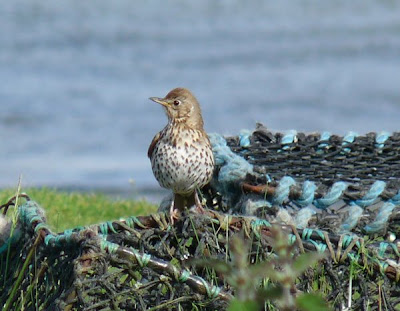 Th influx of Painted Lady butterflies has reached us at last with dozens of these beauties all over. 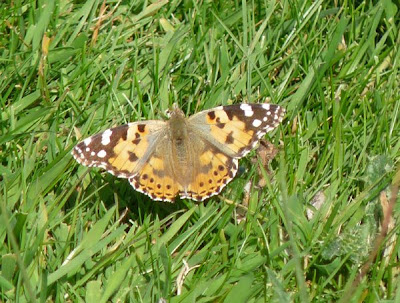 The Bluebells are at their best at the moment but I think it's difficult to capture the true beauty of their spectacle. I've put this image on as there is a single white Bluebell in amongst the field of blue. 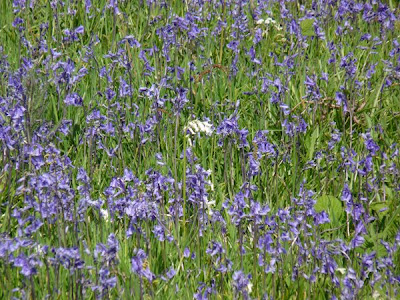 Speckled Wood are quite common up here and always nice to see but they can be difficult as the dance their way up the hedgerows. 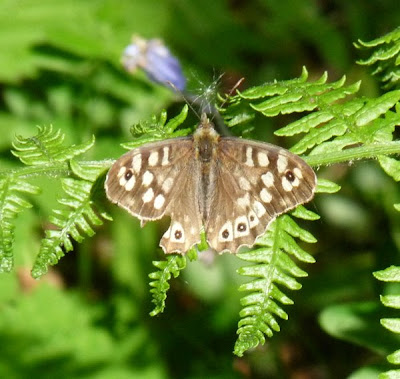 Water Avens is not a plant that I see that regular so it was a nice find and a chance to photograph them. Again they are common on Mull just not at my regular haunts. 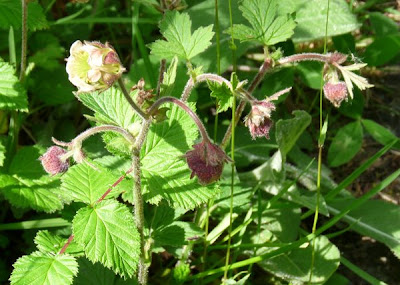 This Large Red Damselfly settled on a leaf and waited patiently while I tried to locate it with the camera - doh, there it is! 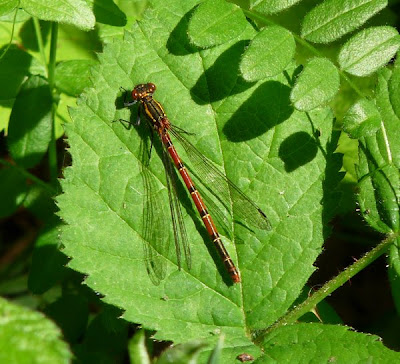 Oystercatchers are always good birds to see, a bold and noisy bird. This one is nesting at the side of the road and you can see by the square end to the bill that this bird spends most of it's time feeding on the shore. Birds that spend more time in the fields have a rounder tip to the bill. 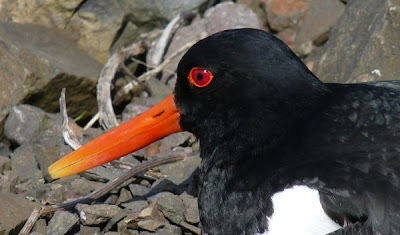