Tuesday was a cracking day with nice blue skies and a pleasant breeze. I managed to start off in great style with the WT Eagles flying together and a Golden Eagle in the distance behind them. The blue sky was superb but the camera wouldn't focus on it so I used the only available thing to spoil the image..... 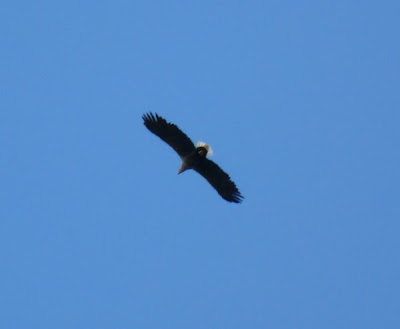 As the WT Eagles were flying together I nabbed a shot - the female is the bird in the bottom of the image. 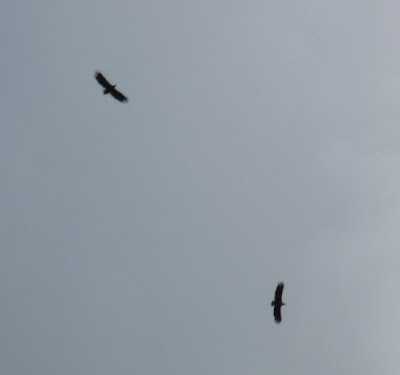 We got an Otter shortly after this and then the day went quiet. We picked up quite a few species along the way but had to work for them all as the wind was picking up. A female Hen Harrier was a nice addition to the list in the afternoon.
Wednesday I started off in the rain to pick up the guests but it was clearing nicely as we set off for the day. A cracking male Reed Bunting was singing it's heart out at the roadside not long after we started. There is a Mute Swan and a Whooper Swan on the same location at the moment and they are keeping to opposite sides of the loch! A male Hen Harrier was a brief but welcome sight. Superb views of Dunlin and Ringed Plover together but unapproachable as the RP's are very flighty. I managed to catch sight of a Golden Eagle landing on a distant ridge which resulted in a mad dash in the direction of said bird. It was a good view when we got there and then it took flight to display it's talents - cracking.
Today was abysmal - cloud down to the ground and persistent drizzle to start with. We checked out the WT Eagle and could hardly locate the bird. We moved on with the intention of coming back and on our return the bird was on display, thankfully. We caught sight of an Otter hauling out with a fish and he proceeded to do Scooby Doo impersonations with a Butterfish! 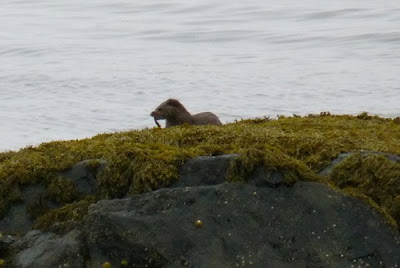 The wader collection is changing day by day. The Dunlin numbers go up and down as do the Ringed Plover numbers. They were joined today by 7 Turnstones in summer plumage - stunning. 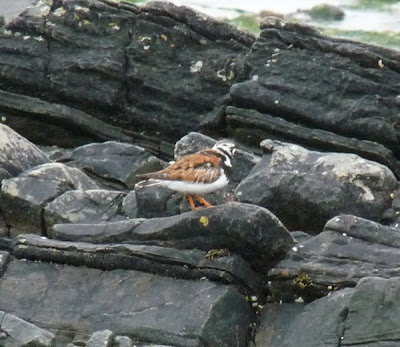 It should be better weather tomorrow and continuing for a few days - I hope they are right!
Posted by Bryan Rains at 17:48