As you can see from the first photo the weather has been, at best, changeable. The benefit of this low cloud, rainy, sunny stuff is it brings the insect devouring birds down to eye level and you also get rainbows - I missed it. It was a lot brighter as I was waiting for the camera to go through all of the 'health & safety' checks but I took one anyway then destroyed the image with photoshop - marvellous! 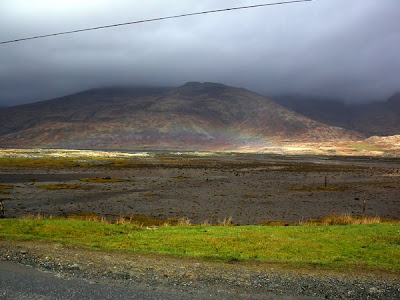 I was also too slow for my first Swallow of the year, or rather the camera was, I saw it and the camera didn't. He might be round later on this evening if the conditions are good so I might get another chance. He was keeping loose company with 4 Sand Martins which usually appear out the front.....right now....they just flew past the window.
The Oystercatchers are really going for it now - they never shut up. Worse again if you get a pleasant night with a good moon that's them set for an all nighter! 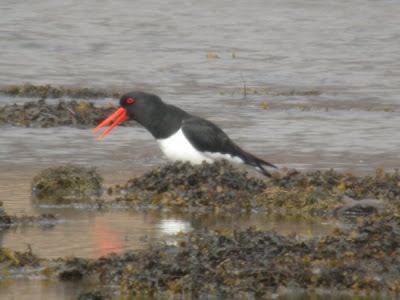 The flock of Greenshank have increased from 2 to three birds so there is a fair bit of 'argy-bargy' there too. I managed to get a photo of two of them together and the third is just out of shot. 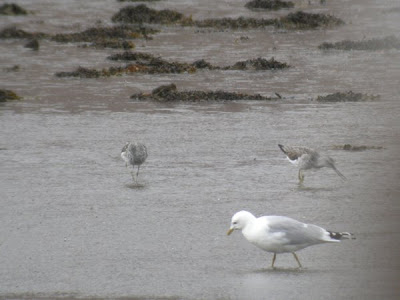 I tried to get a decent shot of the Ringed Plover but they weren't close enough...yet. I had a quick scan of the ridges and picked up a Golden Eagle being harassed by a Raven so that passed a bit of time. The tide normally changes in the wink of an eye but it takes forever when your waiting for it. It got there eventually and all the Ringed Plover flew off.......apart from one. He was a bit huffy at first and wouldn't turn round but a quad bike backfiring had him taking a bit more notice - another underrated bird full of charm and beauty! 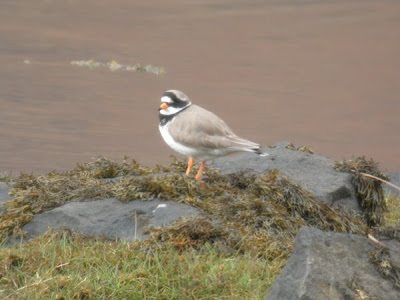 Is that the Ringed Plover in the last shot?? If so what a cool looking bird!!! I am so tired of gray skies and am sure all of us will see sun very soon!

Hi Kallen, yes that is the Ringed Plover in the last shot. As you say a very nice bird.

The ringed Plovers are one of my favourite birds and my first sighting was Boxing day and although I have not seen another one I still look everytime for the distinct markings. Fab picture
Michelle