Easter Monday turned out to be the day of arrivals and good sightings. The day started for me with getting stuck in an Otter jam - the little blighter decided the middle of the road was the way to travel so I had to just trail along behind him till he dropped into a stream!
Tremendous views of Mountain Hares chasing around the fields was a good start for the guests and great views of the Golden Plover on the ground and flying. When we arrived at Uisken there was a burst of activity with a Hen Harrier putting in an appearance then a Peregrine flyby. While I was talking about the lack of finches (Linnet & Twite in particular) this spring and wondering where they were two Linnets flew by. We got them perched on the fence line and, unbelievably, when they flew off they were replaced by 4 Twite - magic or what?! 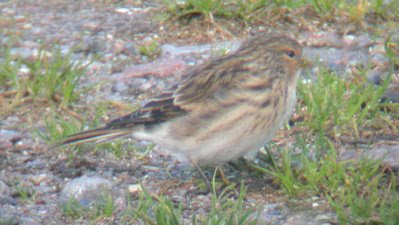 There were good numbers of Swallows and Sand Martins through the day and the Lesser Black-backed Gulls had arrived too. A Golden Eagle graced us with it's presence at lunchtime but the Adders were hiding away despite the warm conditions. Best moment of the day was having the scopes trained on a White-tailed Eagle and everyone deciding that the farmer tending his sheep was a better subject - go figure!
Today the weather turned back to cool and overcast. I started the day in style with a cracking female Merlin that posed briefly on a fencepost. Next on the list was Golden Eagle that showed reasonably well. The Great Northern Divers showed well today and they are starting to look quite smart now so we saw at least 6 that looked like the photo below while looking for Otters. 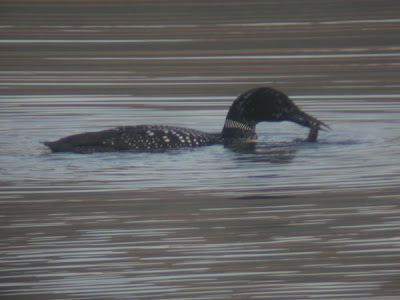 We picked up a female Hen Harrier that rapidly moved off but the male bird performed superbly for a good while before drifting away. We had 2 adult Golden Eagle in the air which, although a good sighting, doesn't bode well for this pair. They failed at the egg stage last year and it looks like the same thing this year. A trio of Otters cheered things up again with the Eider ducks providing a supporting show. We finished the day with the White-tailed Eagles and no farmer this time. One of the birds was perched up and eventually flew off giving a great display.
Posted by Bryan Rains at 18:07

You are extremely lucky to live where you do with the eagles and raptor sightings. I was thrilled today to get a quick look at a Sparrow Hawk that was perched on my neighbours roof, didn't stay around long enough to get a photo but nice anyway. I wonder if it was the same one that crashed into my window.
Michelle