Wednesday was a bit of a cracker with a poor forecast that didn't materialise - woohoo! It was raining as I left home but the further west I went the clearer it got. A year tick was picked up en route in the shape of two Bullfinches that flew across the road in front of me - excellent. A quick check down Fidden to see what geese were still around was unsurprising as the Barnacle Geese appear to have left and only 8 WF Geese remaining. Stunning views of 2 Mountain Hare were had but too windy for any photos. The Wheatears that have arrived had found places to hide or they have moved on as only 1 bird was located down here. A brief stop in Fionnphort had this Diver close to shore and sent the pulses racing with the white patch visible at the rear end - was it a Black-throated? No such luck. It was a Red-throated Diver fishing in the shallows and I managed to get a few shots but none with it's head out of the water - nearly quick enough! 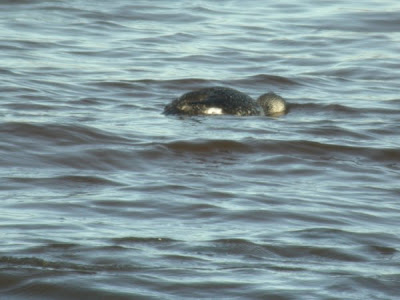 A trip down to Uisken gave up good scenic views rather than good birds although we did have brief views of a distant juv WT Eagle. The stop for lunch was a race against time as there seemed to be showers approaching from the NW. This Adder was still basking in the sunshine as we arrived and if we'd been 10 minutes later, when the first shower arrived, we probably wouldn't have seen it. 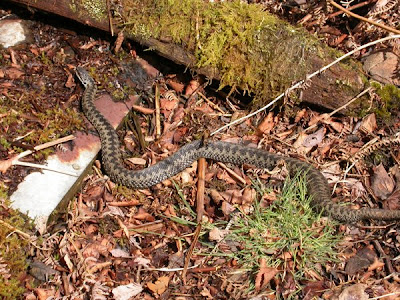 Distant views of 2 Hen Harrier, one male, one female, wasn't unexpected but still a treat. A Golden Eagle drifted past low against the hillside. With the sun shining on the bird it was nice to pick up the colour on the bird through the scope before the next shower came charging through. The wind was starting to pick up and the loch was sporting 'white horses' - not a good sign for finding Otters. We tried a few locations with no luck but we still had Loch Beg to do. We were saved the hassle of looking when we spotted a group of people all looking in the same direction on the water and sure enough an Otter was added to the list. As we were watching the antics of the Otter leaping out of the water to bury itself under the waves a couple of gulls started alarm calling in the distance. A quick look upwards and there was a WT Eagle flying over - class! It soon dropped over the ridge but it wasn't gone for long. A Golden Eagle made a brief appearance closely followed by the WT Eagle which flew over the top of us again with another 2 birds of the same species in tow! These birds circled around for ages and gave a fantastic display that just got better and better. They were joined by a fourth bird and eventually 5 WT Eagle all in the same view was just stunning. Lots of interaction between the birds too with the odd Buzzard coming for a look but keeping their distance.
Thursday, in comparison, was an absolute stinker. The cloud base was low and the wind was brisk to say the least. The highlights are different every day and the total species seen differs slightly but you make the best of it. We managed to see a Slow Worm but no Adder, a female Hen Harrier at close quarter cheered up a quiet lunch and the Mountain Hares showed very well despite the conditions. The bird of the day was the male Hen Harrier that allowed us to follow it down the road at no more than 20 yards away - there is always a gem. We'd struggled for Otter through the day too but right at the last we found one asleep on bare rock which is unusual and it was soon awake and showing well. A fitting end to a difficult day.
Posted by Bryan Rains at 09:39