Tuesday the weather finally broke so the morning was a bit of a wash out. The prospect of a few birds dropping in was quite high and we weren't disappointed. Uisken provided the first migrants of the day with 50 Pale-bellied Brent Goose on the beach along with a single Black-tailed Godwit. The photo is of 2 Brents from another occasion at Uisken. 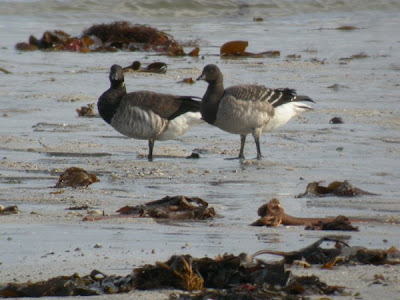 I took delivery of a new camera in the afternoon but I had to wait for the battery to charge up before I could use it. We had decent views of Hen Harrier, heard a Cuckoo and a Whimbrel that we couldn't locate.

Wednesday was a better day weatherwise and I was armed with the Panasonic FZ28 hoping for some close encounters. Fidden was the starting point for the day and it didn't disappoint. 100 Golden Plover, a few Wheatear, cracking views of Meadow Pipit and Skylark, 3 Whimbrel flying by with a Curlew in tow. We moved on to Uisken where a Raven calling in alarm resulted in seeing a White-tailed Eagle flying over. No sign of the Geese or the Godwit so the camera remained unused. Stunning views of a male Hen Harrier at lunchtime but too distant for a snap and still no Adders - they'll be back. The first attempt with the camera came not too long after lunch with a cracking Great Northern Diver just offshore - result. I couldn't have done this with the digiscoping kit. 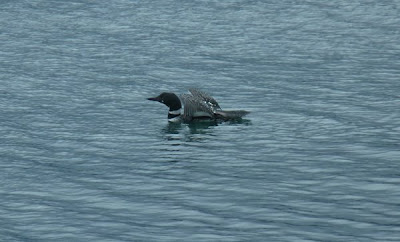 Otters were next on the hitlist and it didn't take too long. As I was searching the far shore the shout went up for 2 Otters on the near shore. Out with the camera again and it didn't disappoint. This photo has caused a bit of hilarity as it looks like a cross between a bear and a beaver! It wasn't a bad effort for the first attempt but there will be better to come I'm sure. We managed to find another 2 Otters but they were distant, another WT Eagle got on the list and right at the death we bagged 2 Golden Eagle. 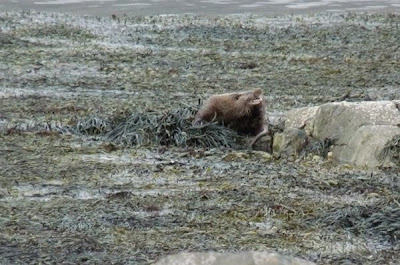 I did try to photograph the first WT Eagle but when I switched the camera on all I could see was a photo of Sunny, our cat, and in a panic I couldn't figure out how to get the thing into shooting mode - it won't happen again!