I'm sure that everyone has been keeping up with the nasty weather over the last few days. We've had our fair share so I've not been out that much. Tuesday evening there were 2 Swans on the loch which I presume were Whoopers but as it was pitch black it was hard to say. They had left by the next morning. The Golden Plover flock has been absent over the last few day so when a flock of 75 turned up on Wednesday it had me thinking as to where they had come from. The worst of the weather was hitting Cumbria at that point so had these birds pushed North to avoid it or had they come from somewhere else? Either way they didn't hang around as they were gone on Thursday.
Friday I had a run out with PS to see what was about in between the showers. We bagged a male Hen Harrier early on but it was a distant bird that was heading away from us. A couple of Reed Bunting in with the Chaffinch flock didn't want to pose for photos so we tested our skills on the waders. This Oystercatcher stood still for long enough to point a camera at which is more than can be said about the Curlew - twitchy blighters! 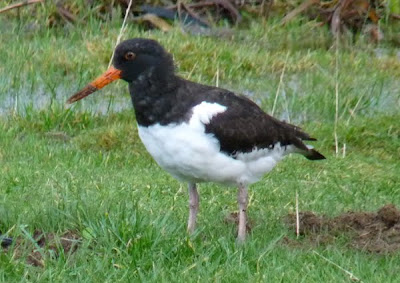 I had a count of the Greenland WF Geese which numbered 30, one less than last time, but there was 3 youngsters this time so I'm guessing I haven't seen all the birds together yet. A few of the Greylags were next to the road and didn't seem bothered by the passing traffic so it was point and click time again - the Three Amigos in action - Ruuunnnnn, he's got a camera.....

The weather was supposed to clear as the day went on - they lied. We had a brief stop for a squint at the Rock Doves which had a few feral with them - it won't be long before they breed with the Rock Doves and spoil the stock.

We managed to get a distant view of an Otter from the roadside but we soon moved on. There were plenty of Buzzards sitting on telegraph poles but it took a while before we actually had an opportunity to get some shots. 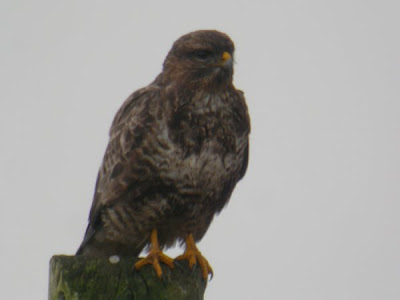 Just after taking this shot I picked up a WT Eagle in the distance but as it flew against the land it was lost to sight. A Reed Bunting feeding at the side of the road was reluctant to move on so we watched for a while and took a few photos. 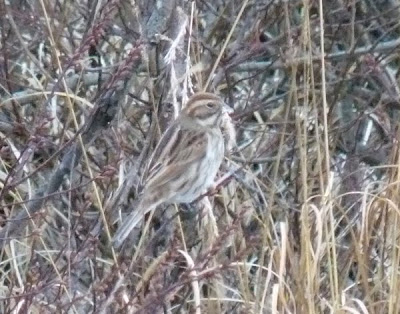 It was getting close to lunchtime so we moved on but it wasn't too long before we spotted two GN Divers close to the shore. As we pulled up both birds dived and an Otter appeared in the same place. He was heading for the shore with a fish so we parked up in a place where we could view him when he hauled out. He managed to find a nice place where he couldn't be seen too well but when he'd finished the fish it was time for a wash...out of sight, of course! We waited patiently and eventually he stuck his head out - 'Are you looking for me?' 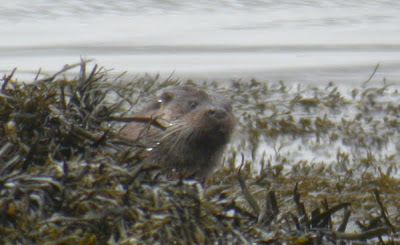 He moved off eventually but soon hauled out again to mark his territory before going fishing again. A great sighting though. The wind was picking up and the showers were becoming more frequent so we pressed on to see if the WT Eagle were at home. We weren't disappointed with the birds but the lack of light made it difficult to get decent shots. The female bird was the one we picked up first.... 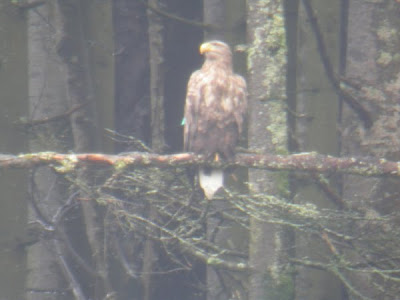 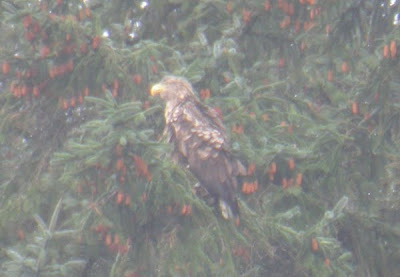 Time was getting short and we'd just picked up another Otter when a tremendous squall came through. It was difficult to keep an eye on the Otter and by the time the squall cleared there was no sign of him - ah well it had been a good day. The rainbow that formed as the last of the rain went through was worth the effort of getting a better viewpoint for it - stunning. 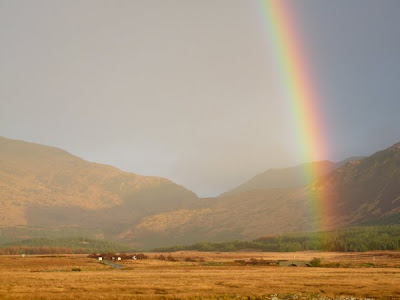 'Stunning'
Reed buntings still look like sparrows to me....